Fighting the Terror of Sexual Assault

Book author Rosemary Trible's uses her personal experience to help others and make an impact. 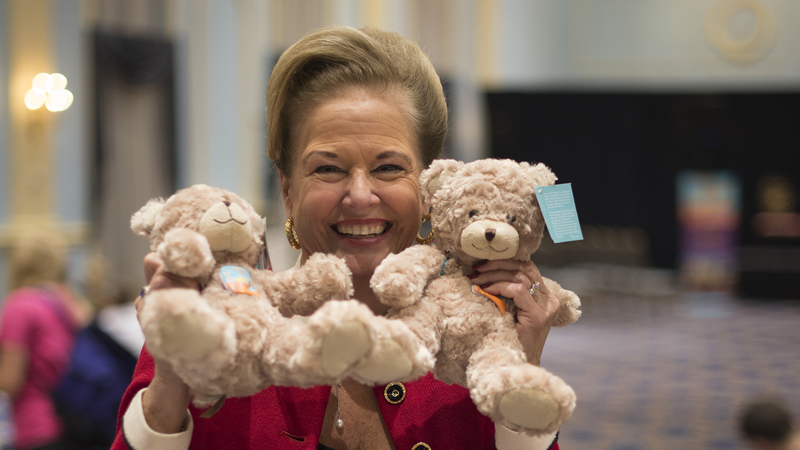 This summer, less than a month after a former swimmer from Stanford University received a controversially lenient six-month sentence for raping an unconscious, intoxicated woman  behind a dumpster at a fraternity party, boomer Rosemary Trible met with the Sigma Phi Epsilon fraternity in Richmond about what their members can do to prevent sexual assault and how they can help victims, in partnership with her global nonprofit, Fear 2 Freedom.

Trible, whose husband, Paul, is the president of Christopher Newport University in Newport News, established Fear 2 Freedom in 2011 to help combat sexual assault on college campuses and redeem and restore victims. “It’s a pivotal moment in our nation. We need to combat this problem,” she said. The number “2” in the organization’s name represents the fact that someone is sexually assaulted every two minutes in the United States.

The idea for the nonprofit surfaced after Trible authored Fear to Freedom, a book about her own faith-based healing journey after she was violently raped at gunpoint when she was 25. Angry about a talk show on rape that Trible hosted on WTVR TV-6 in 1975, the rapist hid in her hotel room and attacked her when she returned from working late one night. He threatened to kill her if she told anyone. “He not only stole my body,” she said, “he stole my joy.”

After her book was published in 2009, she heard from many women who had never told anyone that they had been assaulted, and she realized that more needed to be done to help victims speak out and move from fear to freedom. “Silence is the greatest enemy of healing,” she said.

A petite grandmother of two in her mid-60s, Trible said colleges are the biggest problem area. According to the National Sexual Violence Resource Center, one in five women and one in 16 men are sexually assaulted during their college years. It is actually worse than that since many victims never report the crime because they fear what might happen to them if they do, she said.

THE WORK OF FEAR 2 FREEDOM

In the last five years, Fear 2 Freedom has partnered with 17 colleges, mostly in Virginia, 30 hospitals and other community organizations to provide over 13,000 Aftercare Kits to victims to meet their immediate physical, psychological and emotional needs.

“It reaches them at the time of their greatest trauma,” Trible said. “We want them to know three things: It’s not your fault. You don’t deserve this pain, and you are not alone.”

Assembled by students at annual Celebration Events hosted by Fear 2 Freedom on college campuses, each kit includes new, appropriately sized sweat pants and a T-shirt, toiletries for showering and grooming, a personal note handwritten by the student who assembled the kit, a counseling booklet and a Freedom Bear.

Soft and cuddly, the toy bear wears a backpack with 10 slips of dissolvable paper. Victims are encouraged to write their fears on the slips and tuck them into a pouch under a patch on the bear’s chest where its heart would be. When they feel stronger and are ready to let go of a fear, they pull out that slip of paper, put it in a glass of water and watch as the words and then the paper disappear as a symbol of their healing.

Ambulances pick up the kits at the end of the events and deliver them to participating hospitals and community organizations such as the YWCA that support victims of sexual abuse, child abuse, domestic violence and sex trafficking.

Packed for adults in boxes covered with the organization’s colorful soaring dove logo and in backpacks for children, each kit costs $30, which is raised through individual and corporate contributions.

The 90-minute Celebration Event also includes a video that features stories from victims about how they were impacted and how they have healed, plus information from university administration and local experts about sexual assault, how to prevent it and local resources.

Working with contacts she developed during her husband’s political career as a U.S. congressman and senator, Trible has arranged Celebration Events off campus with other concerned organizations, including U.S. senators and the Washington Redskins.

As the first lady of CNU, Trible has personally supported CNU rape victims for the last 20 years. When Molly, a CNU coed, was raped, Trible took her to the hospital and stayed with her during the Physical Evidence Recovery Kit exam (PERK). Performed by a forensic nurse, the exam is used to gather evidence for prosecutors or investigators. It also includes pregnancy testing and treatment of any sexually transmitted infections.

“It is very demoralizing. They keep the victim’s clothes as evidence and send them home in paper scrubs,” Trible said.

According to Jean Cheek, a forensic nurse with the VCU Health System, “This only adds to their shame and trauma.”

Trible said Molly’s experience and suggestions from forensic nurses led to the creation of the Aftercare Kits.

This summer, Trible launched a national campaign, “Be the Change,” to involve more colleges outside of Virginia and empower more students to become part of the solution and foster a culture of intervention, prevention and awareness. Schools in Alabama, Colorado, Texas and Ohio are already participating.

In addition to Celebration Events, Fear 2 Freedom provides participating colleges with comprehensive educational resources that include a 30-minute Emmy award-winning film featuring testimonials from men and women who survived sexual assault. The film challenges students to recognize the impact of sexual assault and the importance of consent and bystander intervention.

Trible is also expanding the organization’s efforts to involve sororities and fraternities. “I believe Greeks are a key to solving the problem,” she said.

Internationally, Fear 2 Freedom has provided Aftercare Kits to orphanages and other organizations that help victims of child abuse and sex trafficking in Thailand, Cambodia, Honduras, Nicaragua, Guatemala, Kosovo, Peru and the Dominican Republic.

Although being raped changed her life forever, after a long healing process, Trible, a former America’s Junior Miss, has forgiven her rapist and is grateful for the opportunity to use her experience to help others. “What was meant for evil can be used for good,” she said.

Based in Hanover County, Paula Neely writes frequently for BOOMER.