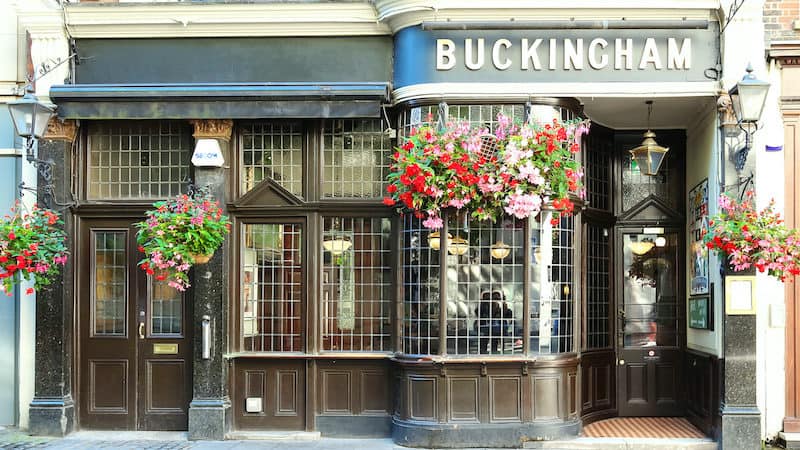 Take a trip through funny British phrases and idioms with travel writer Rick Steves, so you don’t get your knickers in a twist when chatting with locals.

As we’ve had to postpone our travels because of the pandemic, I believe a weekly dose of travel dreaming can be good medicine. These thoughts about communicating on the road in Britain are a reminder of the fun that awaits us at the other end of this crisis.

Oscar Wilde famously said that the English “have really everything in common with America nowadays – except, of course, language.” It’s still true. A trip to Britain comes with plenty of linguistic surprises.

I’ll never forget checking into a small-town B&B as a teenager on my first solo European adventure. The landlady cheerily asked me, “And what time would you like to be knocked up in the morning?”

I looked over at her husband, who winked, “Would a fry at half-eight be suitable?” The next morning, I got a rap on the door at 8 a.m. and a huge British breakfast a half-hour later.

Britain can be an adventure in accents and idioms …

Every day you’ll see babies in prams and pushchairs, sucking dummies as mothers change wet nappies. Soon the kids can trade in their nappies for smalls and spend a penny on their own. “Spend a penny” is British for a visit to the loo (bathroom). Older British kids enjoy candy floss (cotton candy), naughts and crosses (tic-tac-toe), big dippers (roller coasters), and iced lollies (popsicles). Kids are constantly in need of an Elastoplast or sticking plaster (Band-Aid), which their parents buy at the chemist’s (pharmacy).

In a stationery store, you can get sticky tape or Sellotape (adhesive tape), rubbers (erasers), and scribbling blocks (scratch pads). At garden shops, those with green fingers (a green thumb) might pick up some courgette (zucchini), swede (rutabaga), or aubergine (eggplant) seeds. If you need a torch (flashlight), visit the ironmonger’s (hardware store).

In Britain, fries are chips and potato chips are crisps. A beef burger, made with mince (hamburger meat), comes on a toasted bap (bun). For pudding (dessert), have some sponge (cake).

The British have a great way with names. You’ll find towns with names like Upper and Lower Slaughter, Once Brewed, and Itching Field. This cute coziness comes through in their language as well. You’ll visit “brilliant” (wonderful) sights that’ll give you “goose pimples” (goose bumps). Your car will have a bonnet and a boot rather than a hood and trunk. You’ll drive on motorways, and when the freeway divides, it becomes a dual carriageway. Never go anticlockwise (counterclockwise) in a roundabout. Gas is petrol, a truck is a lorry, and when you hit a tailback (traffic jam), don’t get your knickers in a twist (make a fuss) – just be patient and queue up (line up).

The British never say they have a two-week vacation, but many locals holiday for a fortnight, often in a homely (homey) rural cottage or possibly on the Continent (continental Europe). They might pack a face flannel (washcloth) and hair grips (bobby pins) in their bum bag (never a “fanny” pack – which refers to the most private part of a woman’s anatomy). If it’s rainy, they wear a mackintosh (raincoat) or an anorak (parka) with press studs (snaps).

If you get settled into a flat (apartment), you can post letters in the pillar box or give your mum a trunk (long-distance) call. If that’s too dear (expensive), she’ll say you’re tight as a fish’s bum. If she witters on (gabs and gabs), tell her you’re knackered (exhausted) and it’s been donkey’s years (ages) since you’ve slept. After washing up (doing the dishes) and hoovering (vacuuming), you can have a plate of biscuits (cookies) and, if you’re so inclined, a neat (straight) whisky. Too much of that whisky will get you sloshed, paralytic, bevvied, wellied, ratted, popped up, or even pissed as a newt.

Then there is the question of accents. These days, accents are trendy in Britain. Politicians, newscasters, and movie stars have been favoring deep accents over the Queen’s English. It’s hard for American ears to pick out all of the variations – and some accents are so thick they sound like a foreign language – but most Brits can determine what region a person is from based on their accent.

All across the British Isles, you’ll encounter new words, crazy humor, and colorful accents. Pubs are colloquial treasure chests. Church services, sporting events, and local comedy shows are linguistic classrooms. The streets of Liverpool, the docks of London, and children’s parks throughout the UK are playgrounds for the American ear. One of the beauties of touring Great Britain is the illusion of hearing a foreign language and actually understanding it … most of the time.