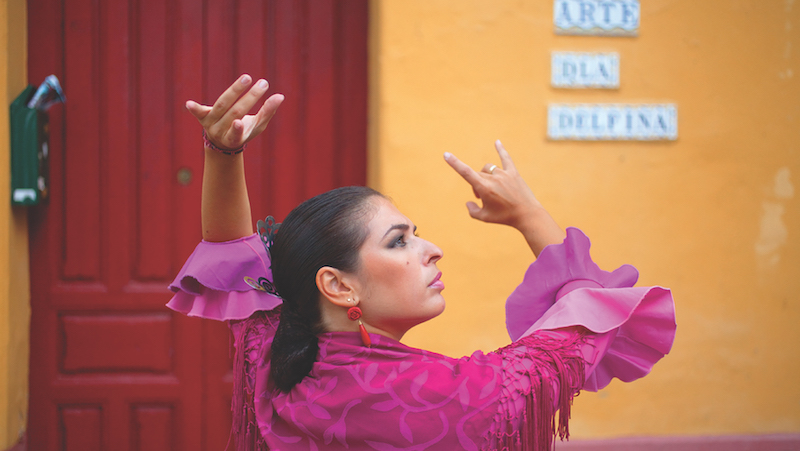 The people of Spain’s Andalucía region remain ready for revelry and religiosity, two states that often mix, with fine cuisine and dancing – especially flamenco – an important part of the blend. Rick Steves’ Europe takes us there, to an extended evening blending the locals’ loves.

As we’ve had to postpone our travels because of the pandemic, I believe a weekly dose of travel dreaming can be good medicine. Here’s one of my favorite European memories from the south of Spain – a reminder of the fun that awaits us at the other end of this crisis.

In Spain’s Andalucía region, revelry and religiosity go hand in hand. The same passion and energy dedicated to partying is put into long, solemn religious processions that clog the narrow streets of its towns and cities. In Andalucía, it seems there’s always something going on. But you’ll miss the action if you’re in your hotel room after dinner. Yes, dinner is late … and the impromptu festivities are often even later. The sun is gone, it’s finally cool, and everyone – young and old – is suddenly energized.

I was enjoying dinner at a restaurant in Cordoba with Isabel, a charming local guide who talks about food with the passion of a mother talking about her children. With the olive oil, the lighting, and her love of the cuisine all just right, every plate seemed to twinkle and shine. The meal was a montage of Spanish delights, from the roasted almonds and spicy green olives that hit the table automatically, to the local salmorejo (like a thick, bright orange gazpacho), boquerones (anchovies), fried eggplant, and “Arab salad” with cod and delicate orange sections.

The rabo de toro (bull tail stew) was as dark as meat can be … almost inky, even in flavor. The jamon iberico – a gift from the restaurant – was introduced as “the best ham in Spain” and very expensive. With its fat not lining the meat but mixed in, it was glistening with flavor. Eating it was the culinary equivalent of pinning a boutonniere onto a tux. The wine was the kind that inspires servers to bring out the special glasses.

Drinking in a somber procession and corresponding revelry

Stepping out of the restaurant, we were swept into a somber procession, poignant and powerful. Trumpets blared a fanfare, children carried a homemade float, and candles jostled in unison as the marchers glided in the dark of the night.

I happened to be in Cordoba for the Festival of the Crosses, a competition where each neighborhood parties proudly around its own towering cross made of red carnations. Church bells ring not only a call to prayer, but also a call to fiesta. Locals enthusiastically use this special day on the church calendar as a springboard for a community party.

The next morning, I stepped out and the neighborhood gang on one square was still lively. It was their first year entering the contest, their cross had won first prize, and it seemed they’d been celebrating ever since. It was a scene of exhausted, hungover happiness – as if they’d been eating, drinking, and dancing for 24 hours (which they probably had). Now the cross was abandoned – missing carnations like a bum misses his teeth – and the dancing was over. The last of the revelers gathered around the makeshift bar that seemed to provide physical support for those determined but barely able to carry on. I had to join them.

By joining the scene, I roused the exhausted gang on that little plaza to dance around their tired carnation cross one more time. Within seconds the energy and magic of the previous night’s party had reignited, and the yard was once again thriving with slinky flamenco. Sinuous arms, toned torsos, and leggy legs, heels with attitude, flowing hair … everything churned with a silky Andalusian soul. Like crickets rattling their wings in a mating ritual, Andalusian women – dressed in their peacock finery – fluttered their fans and clicked their castanets.

I’d been in Andalucía for a week, and I realized it’s a hair-trigger flamenco society. I like hair-trigger cultures. Just as Austria is eager to waltz and Ireland is always ready for a good folk song, Andalucía is just waiting for the simplest excuse to grab castanets and dance.

After a few minutes of dancing, I let the tired party die, and everyone resumed their positions – propped up by the bar. I joined them there to say thanks. They filled a bottle cap with a ritual shot of firewater and gave it to me. As a dozen onlookers watched, I downed it. With my head thrown back, knowing that all Andalusian eyes were on me, I was plunged into what seemed like a long silence. I wanted to say something really clever or meaningful. But I could only come up with a cliche. I sang, “Olé!” And everyone cheered.