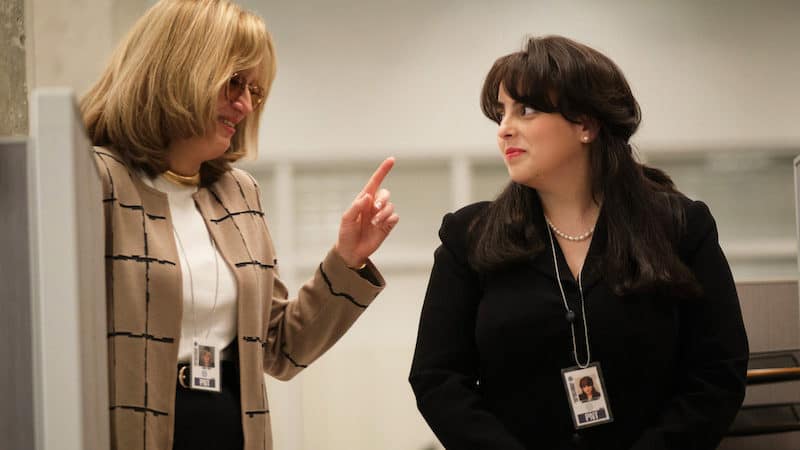 “Variety” digs behind the scenes of “Impeachment: American Crime Story,” at making Linda Tripp more than just the “treacherous bitch.”

SPOILER ALERT: Do not read if you have not watched the series premiere of “Impeachment: American Crime Story.”

In true “American Crime Story” form, the anthology drama’s third installment, “Impeachment,” opens a little bit in the future from the events covered by the series.

It is 1998 and Monica Lewinsky (played by Beanie Feldstein) is preparing to leave Washington, D.C. for New York City – and a job in Revlon’s publicity department, although that detail is not made explicit in the show at the start. Before she goes, she agrees to meet up with Linda Tripp (Sarah Paulson), who ominously tells her she may have a solution to a problem. That problem, although not named yet, is the fact that President Bill Clinton (Clive Owen) is being accused of improper conduct with other women and Monica confided some of the details of her own relationship with him to Linda. When Linda shows up to meet Monica, she is not alone, and suddenly Monica is being held by lawyers from Ken Starr’s (Dan Bakkedahl) office. She may have been naive about some matters of the heart, but she knows Linda sold her out, and she calls her former friend a “treacherous bitch.”

The latest “American Crime Story” deep dive turns the lens back a quarter century to revisit American culture as the expansion of 24/7 cable news, the mainstreaming of the internet, and the deepening of Washington’s partisan divide made for a combustible mix at the end of the Clinton era. “Impeachment” has a high bar to reach following the Emmy-winning success of previous “American Crime Story” editions: 2016’s “The People v. O.J. Simpson” and 2018’s “The Assassination of Gianni Versaci.”

After Monica’s declarative judgment of Linda, “Impeachment’s” first episode flashes back five years to begin to show how the women got to that point. But rather than follow Monica finishing school and starting her internship in the White House, it centers on Linda.

Learning about the real Linda Tripp

“She was a background cartoon villain in the story. The actual truth is that as I researched her more, she became deeply fascinating to me, and I felt real affection for this person who did a terrible thing. And it doesn’t mean the thing is OK,” “Impeachment” showrunner Sarah Burgess tells Variety.

“The thing that made me feel like I had to take this job was actually when I started digging deep into research and I read a lot about Linda. The way she spoke suggested this character to me. The voice of Linda comes from the real Linda Tripp,” she continues. “There’s this great line in a ‘New Yorker’ article in 1998 where she’s talking about the difference between the Bush White House and the Clinton White House because she revered the Bushes and thought the Clintons were too casual, and she said, ‘Mrs. Bush would have rather been catheterized than use a public bathroom’ because she saw Hillary do that, and I put that line in the show. That gave me a whole character. That word choice is so unnecessary.”

Tripp was a former White House secretary who was transferred to the Pentagon, where she struck up a friendship with Lewinsky after she, too, was transferred. When she was in the White House, she was “proud and happy” to work there, Burgess notes, but she was also a “a little intense sometimes” and “a frustrated bureaucrat.” What Burgess wanted to capture in the opening sequence was, “How does that secretary end up in this situation?”

“Linda is such an active character, who in some ways is the author of this story because she’s responsible for making this public, so I felt like I was putting the story in her hands,” she explains.

The first episode tells parallel stories about Linda and Paula Jones (Annaleigh Ashford), who is just starting to go public with her accusations against President Clinton. Monica doesn’t re-enter the story until the later acts of the episode, and other important women in this saga are mere blips (a shot of Ann Coulter on a television screen, a near silent Hillary in the aforementioned bathroom encounter with Linda) or completely absent (Clinton’s secretary Betty Currie). Even Clinton himself is not a physical presence in the episode until the very final frames when he calls Monica, who had turned down actual plans with Linda to sit and wait by the phone with the hope that he would reach out to her.

“One of the biggest swings or biggest risks in this show was writing Episode 1 from Linda’s point of view, largely,” Burgess says. This was in great part because Linda doesn’t know what is going on with Monica right away.

Burgess recalls “agonizing over” the scene in which Linda and Monica were having lunch together and Monica was being coy about her relationship, but the wheels in Linda’s mind were turning. Burgess was very aware that people who just met would not be sharing secrets, but she also needed to show “that Linda picks up on something without Monica fully telling her. You want to deliver a scene that is specific, that doesn’t put anything on actors and directors to sort through it, so it ends up feeling vague and confusing.”

Through research, Burgess learned the real Tripp said, “It was immediately notable that Monica was coming in in the job she was coming in,” which piqued her interest. It became a nugget that Burgess ran with to dramatize events, which required compressing time and consolidating certain incidents to move the story along faster.

But by the end of the first episode when Linda is calling literary agent Lucianne Goldberg (Margo Martindale) to say she may finally have a juicy White House book in her, it’s still just gossip, Burgess notes. The choice to end the episode on Bill calling Monica was a way “to now plant the audience in the actual lived reality, which is, she’s actually getting a call from the most powerful human on the planet.”

Ending the episode that way was also a way to lead into the point of view switch that would come in the second episode when Monica and Bill’s relationship takes the spotlight. The season overall will switch perspectives multiple times, she notes, focusing mostly on Linda and Monica but coming again when “other big players – whether it be Ken Starr, whether it be Hillary Clinton – affect their lives, intersect with their lives.”

Input from Monica Lewinsky herself

Lewinsky is a producer on “Impeachment” and gave notes on the scripts, generally focusing on “how she remembered something,” Burgess says. The two often discussed how to consolidate pieces of the story for the necessity of scripted television, adding that she doesn’t recall Lewinsky ever saying she didn’t want something included.

“Monica is incredibly self-aware and actually would say to me at times, ‘This interview I gave, I feel pretty sure this thing I said in ‘99 was an accurate reflection of it.’ So much of this was written about by the FBI, I had so much under-oath testimony to base things on,” she explains.

Even details as seemingly small as Monica saying she “loved” a poster in a Pentagon office because it was of Bill Clinton had been chronicled before, in Lewinsky’s memoir, so it became fair game to include. On the flip side was Tripp, who was not involved in the production. She died in April 2020 at age 70, while “Impeachment” was still being worked on.

“I felt a significant responsibility to do right by her and also give her full dimensions of humanity,” Burgess says of Tripp. “Because I was making her so central, you’re giving a part of yourself to the character, and I feel accountable for how Linda is perceived. I did feel freedom in writing her, because when a character is described internationally as a villain, of course that gives you expansive freedom to explore other parts of them.”

Burgess says she would immerse herself as deeply as she could into the point of view of the character while writing, acknowledging that “we all have a distorted view of the world and our place in the world, so I have to write the scenes as they’re experiencing it.” To then avoid steeping the story in any one particular bias, she would “step back and read the scripts and see how it feels when we collect all of those points of view.”

Burgess was a child when the real-life events in “Impeachment” were unfolding. That gave her important perspective on the story that was colored by the firestorm of news coverage that the scandal generated in the late 1990s on what were then-fledgling news channels MSNBC and Fox News, as well as CNN.

“I now as an adult understand where [Monica] was coming from and who she was,” Burgess says. “There was a scene that was really important to me where she was arriving for work holding Starbucks and there was this feeling of, ‘Your life is ahead of you, and you don’t know who you’re going to become.’ That was not the way the story was told in the ’90s, so that resonated with me, and I felt it was important to take care of that as much as I could in the writing, especially when things were going bad for her.”