From the creator of 'A Moment in Time' 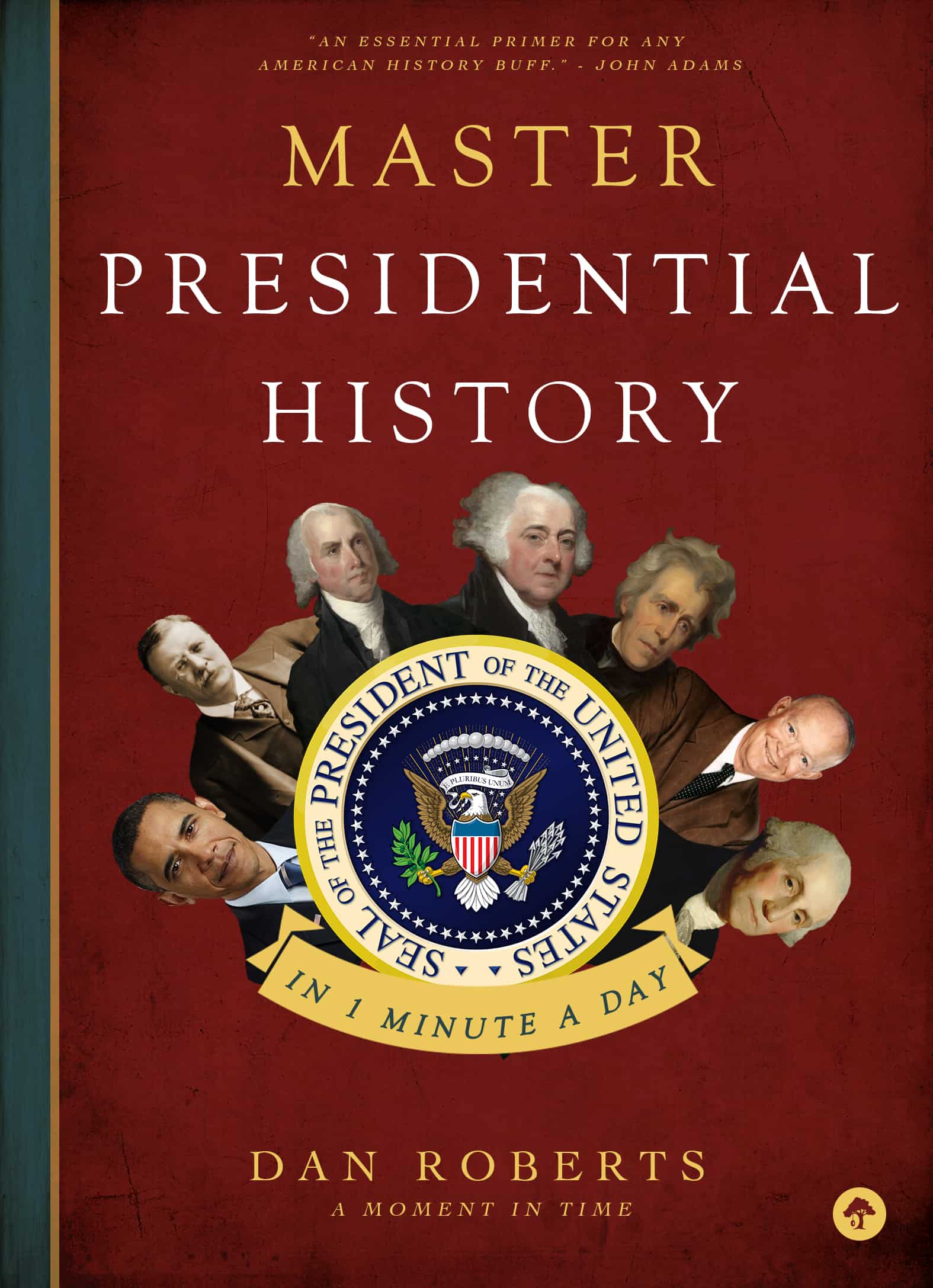 Since 1993, professor and historian Dan Roberts has been educating listeners with “A Moment in Time.” These two-minute audio history lessons have covered interesting and insightful gems, with an audience that now reaches worldwide. The program is carried by 150 domestic public radio stations and the worldwide Armed Services Radio Network, with three to five million listeners per day.

In 2019, Roberts published Master American History in 1 Minute a Day, 300 mini-lessons offering insights, amusement, and cocktail party fodder. Or, as a creative idea from my sister, each entry can become a daily ritual; she and her husband read a page each day at lunchtime.

A little more than a year later, Roberts has published Master Presidential History in 1 Minute a Day.

In the book, for example, each president, from George Washington to Donald Trump, gets a one-page synopsis of personal and professional highlights; then followed by snapshots highlighting each president’s time in office (with occasional excursions into life before the presidency). Each president’s section ends with his legacy.

Sign up for our monthly Boomer Books e-newsletter or other e-newsletters tailored for boomers!

The chronological entries include history both shameful and worth celebrating. As with Master American History, the mini-lessons provide insights, cocktail party fodder, and daily “meditations” on America’s past.

Unless you’re a historical scholar, you’ll probably uncover gems of insight and tidbits of trivia – including many that shed light on contemporary issues. Just a few that I found include:

Garfield believed that the government hiring was corrupt and needed serious reform … Garfield was also concerned that African Americans in the South were seeing civil rights abridged by a racist white majority determined to reclaim the social arrangements of the pre-Civil War era. He continued to appoint African American and white Southern Republicans to prominent government positions.

On July 2, 1881, the president was chatting with Secretary of State James G. Blaine as he awaited his train on the concourse of the Baltimore and Potomac Railway Station. Suddenly, he was approached by a disillusioned federal office-seeker, Charles J. Guiteau, who then shot the president twice …

As Secretary of War Robert Todd Lincoln watched in horror, the nation began to relieve the tragedy of his father’s assassination sixteen years earlier …

Born in the South, Wilson absorbed the social strictures of the antebellum southland early in life. As he matured, he carried those memories and racist tendencies into the personal and professional arena. …

Almost immediately after Wilson entered the White House, he considered the suggestion of Postmaster General Albert Burleson that Wilson segregate the entire federal government. Stung by Black criticism and that of liberal northern newspapers, he relented at first; but he then permitted individual Department heads to proceed to Institute apartheid in their bureaus. Soon the heavy hand of racial separation was felt all over the government dash including the Navy, which theretofore had not been segregated. …

Outbreaks of race rioting and lynchings directed against African Americans by angry whites broke out all over the North. Wilson forcefully denounced the lynchings, but he refused to send troops to break up white rioters and protect the Blacks.

When he received word of President Warren Harding’s untimely death in July 1923, Calvin Coolidge took the presidential oath from his justice-of-the-peace father at 2:47 a.m. and then went back to bed. Such apathetic behavior at an event of that import reveals something of the character of the man America came to admire and appreciate. The conclusion of his political career was equally as phlegmatic. While on vacation in 1927, he summoned reporters, lined them up, in handed each in attendance a slip of paper. The message: I choose not to run for president in 1928.

Within seven months of his departure from the White House, the nation suffered a gigantic stock market crash, the worst economic contraction in U.S. history, and began the long painful decline into the Great Depression. As a result, Silent Cal’s reputation and popularity received a well-deserved shock. Most observers have counted Coolidge among the worst presidents.

When a state Senate seat opened up in 1962, [Jimmy Carter] parlayed his experience as a local school board chairman to enter the contest. Carter’s problem was that he was inclined to be supportive of Black civil rights, integration, and liberal social issues, but this meant downplaying his true preferences.

He ran twice. Carter won in 1970 using near-racist language in a bitter primary campaign against former governor Carl Sanders. After winning, in a head-snapping inaugural address, Carter reversed course and set the tone for his four years as governor, “no poor, rural, weak, or Black person should ever have to bear the additional burden of being deprived of the opportunity for an education, a job, or simple justice.” Suddenly, Carter became the symbol of the progressive New South – complete with a cover story in Time magazine.

Take away … and use

Such information is more important than just adding to a reader’s storehouse of knowledge, however. As George Santayana said, “Those who cannot remember the past are condemned to repeat it.” Being informed is requisite to being a responsible citizen. Understanding what happened in years – decades, centuries – past is essential to understanding the current state of affairs.

Be informed. Our democracy depends on it.

Find your next favorite read with Boomer book reviews.