Home » Family » Health » When Health Is a Laughing Matter

When Health Is a Laughing Matter

The best medicine for all ages, no prescription required 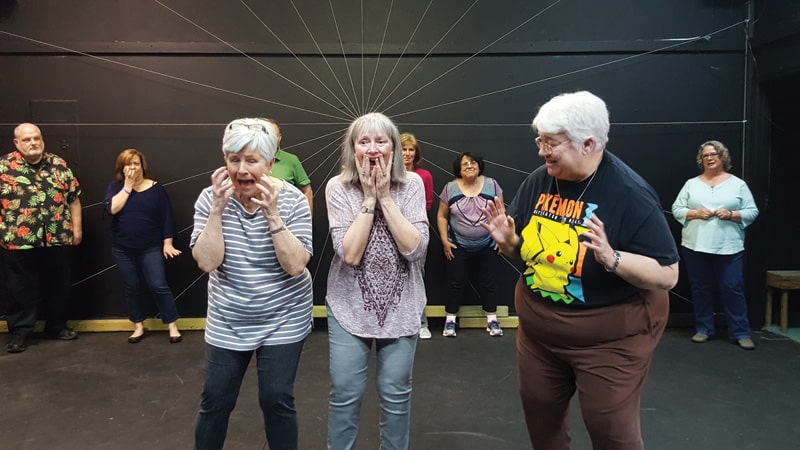 It’s the “best medicine,” they say. It reduces stress, increases circulation and eases anxiety. It creates bonds with others, promotes creativity and is shown to boost overall happiness.

No, it’s not cardio.

It’s not even Xanax.

I am, of course, referring to the age-old practice of laughter.

And what pairs better with laughter than comedy? Sweeping the nation with its comedic benefits and laughter-inducing exuberance is the art of improvisational comedy.

In this form of comedy, participants perform everything unplanned and unscripted, creating characters and dialogues spontaneously. They work off of the concept of “yes, and,” acknowledging what their scene partner has said or done and taking the scene a step further.

Improv has trickled down from well-known TV shows like Whose Line Is It Anyway? and Saturday Night Live, making its way to the mainstream to become accessible – and popular – among “commoners” merely seeking a creative outlet.

Though coming up with impromptu dialogue may sound complex, “Essentially we’ve all been improvising our entire lives, every day,” notes Elizabeth Byland, founding director of Comedy Connects: Comedy for Seniors. “It’s all about accepting someone else and accepting their ideas … and listening and responding in the moment.”

Byland, who’s been practicing improv for over a decade, finds the most enjoyment working with the 55+ community. “When you watch a group of seniors get together and do improv, it’s the most satisfying thing in the world,” she remarks. “They have that attitude that’s like, ‘I’m just going to go for it!’ … It’s a joy to watch.”

Improvisers balance listening, drawing emotions and creating scene foundations together. But above all, as long as performers are having fun – just like the points in Whose Line? – the rules don’t matter. 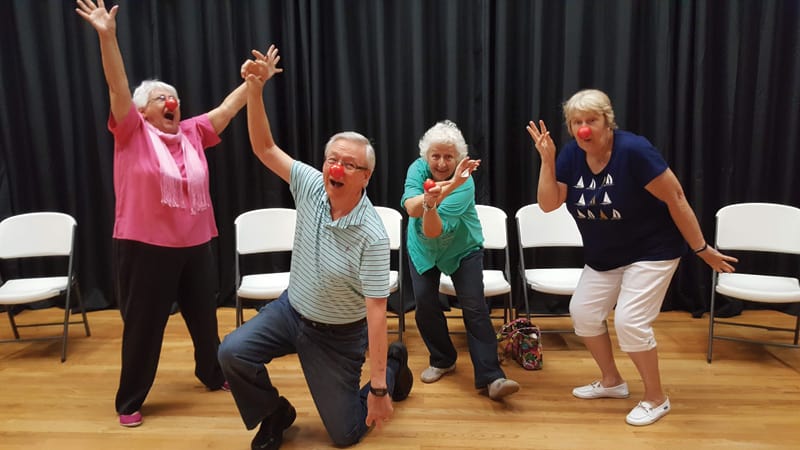 The perks of improv go beyond a few extra chuckles each week. Improv allows participants to tap into the creative side that may otherwise go neglected in everyday life. It also harbors community, engages seldom-used emotions and, most importantly, helps expand that comfort zone just a little bit wider.

Studies have also shown that practicing improv can help boost confidence and creativity while decreasing anxiety and depression.

Plus, it gives participants a chance to interact with others on an entirely unique level. “The benefit of laughing with others is immense,” says Byland. “It releases endorphins and forms bonds with other people … It provides a sense of community that folks don’t necessarily feel like they have anymore.”

JUST WHAT THE DOCTOR ORDERED

But there are other ways outside of comedy to get guaranteed guffaws.

Allow me to introduce you to: laughter yoga.

Back in the ’90s, when all good ideas were hatched (this was the decade that brought us Seinfeld, the internet and pizza bagels, after all), Dr. Madan Kataria created laughter yoga. Recognizing the immense health benefits of laughter, he brought together a group of friends for a session of joke exchanges to get the chortles rolling. While this original plan lost steam fairly quickly, it did get him thinking: What if you simply forced yourself to laugh?

Probably similar to the first time Edison successfully lit up a light bulb, or the first time someone logged onto AOL, Dr. Kataria realized he had come up with something brilliant.

Laughter yoga is not so much “namaste with a side of giggles,” so feel free to leave the yoga mat at home. It’s simply a set of exercises designed to imitate genuine laughter – no comedy or jokes required. So think of it more like “simulated chuckles with a side of stretches.”

A standard session consists of five to 10 fast-paced exercises that incorporate contrived laughter. Each exercise also utilizes different forms of breathing, which stretch out the diaphragm in ways it’s not typically stretched – this is the “yoga” part.

And if you think it all sounds silly and childlike … you’re picturing it correctly. Spoiler alert: no one looks sexy doing laughter yoga. But, when everyone else is doing it, it’s suddenly normal. Like a conga line.

YOU DON’T HAVE TO LAUGH … TO LAUGH

You know how, after a robust belly laugh, your head feels clearer, your mood lightens and you can feel your endorphins running amok? The purpose behind laughter yoga is to provide the body and mind with the same feelings and benefits as a genuine bout of laughter.

“Your body can’t tell the difference between real laughter and simulated laughter,” explains Slash Coleman, certified Laughter Yoga Leader at RVA Laugh Club. “The same amount of oxygen is going into the body … it still creates endorphins and oxytocin.”

And often (or perhaps always), authentic laughter squeaks out throughout the session; it’s almost impossible to avoid. Kind of like trying not to yawn while being in a room full of yawning people.

With each session, Coleman works to build community through interactive games, collective exercises and frequent eye contact. “[Laughter yoga] helps people feel more connected, less alone,” he explains. “There’s too much stuff in this world that makes us feel separated.”

After all, you know what they say: feigned laughter is the best medicine.

WHERE TO GET YOUR YUKS ON

THE SCIENCE OF HUMOR

“Laughter appears to cause all the reciprocal, or opposite, effects of stress,” Berk says. Whereas stress hormones suppress immune function, which can lead to sickness, laughter shuts down the release of stress hormones and triggers feel-good neurochemicals such as dopamine, resulting in calming, anti-anxiety benefits.

As a result, laughter has been linked to benefits such as lower levels of inflammation, improved blood flow, increased activity of disease-fighting “killer cells,” and improved memory.

Granted, some researchers are skeptical that laughter alone causes these benefits, but even skeptics won’t claim that laughter causes harm.