Home » Travel » Lessons from a Schoolmaster in Bacharach

Lessons from a Schoolmaster in Bacharach 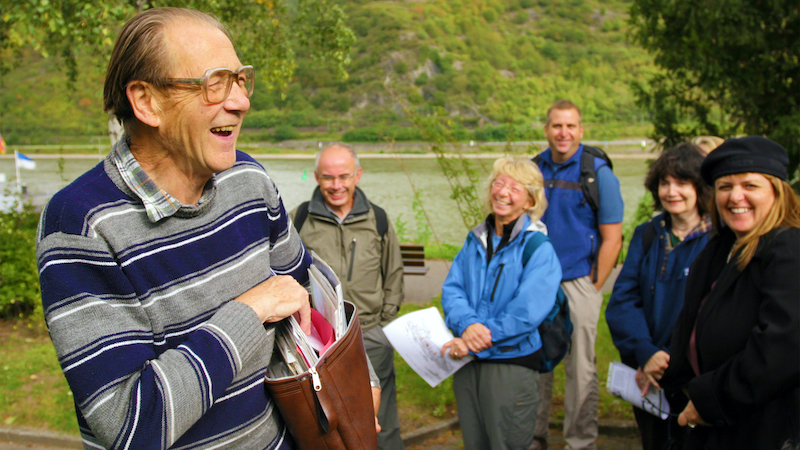 “When I think of what the Nazis did to Germany, I remember that a fine soup cooked by 30 people can be spoiled by one man with a handful of salt,” Herr Jung told Rick Steves on a visit to Bacharach, recalling the terror of the war years and the Nazi regime.

I’m thinking back on my favorite European memories, and my favorite Europeans, including Herr Jung, the German schoolteacher who passed away not long ago. When I close my eyes, I can still imagine Herr Jung walking me around his hometown … and I still hear his caring teacher’s voice.

When cruising down the romantic Rhine River in Germany, I always stop in my favorite town along that fabled river: Bacharach. This pleasant half-timbered village with vine-covered hillsides was once prosperous from its wine and wood trade, and now works hard to keep tourists happy.

The riverfront scene is laid-back. Retired German couples, thick after a lifetime of beer and potatoes, set the tempo at an easy stroll. I gaze across the Rhine. Lost in thoughts of Bacchus and Roman Bacharach, I’m in another age … until two castle-clipping fighter jets from a nearby American military base drill through the silence.

The Rhine Valley is stained by war. While church bells in Holland play cheery ditties, here on the Rhine they sound more like hammers on anvils. As the last of the World War II survivors pass on, memories fade. The war that ripped our grandparents’ Europe in two will become like a black-and-white photo of a long-gone and never-known relative on the mantle.

I pause at Bacharach’s old riverside war memorial. A big stone urn with a Maltese cross framed by two helmets, it seems pointedly ignored by both the town and its visitors. Even when it was erected to honor the dead of Bismarck’s first war in 1864, its designer sadly knew it would need to accommodate the wars that followed: Blank slabs became rolls of honor for the dead of 1866, 1870, and 1914-18.

Bacharach is probably my favorite Rhine Valley town because of my friendship with Herr Jung, the town’s retired schoolmaster, who takes me on a thought-provoking walk with each visit. He joins me at the memorial, and I ask him to translate the words carved on the stone.

“To remember the hard but great time …” he starts, then mutters, “Ahh, but this is not important now.”

Herr Jung explains, “We Germans turn our backs on the monuments of old wars. We have one day in the year when we remember those who have died in the wars. Because of our complicated history, we call these lost souls not war heroes but ‘victims of war and tyranny.’ Those who lost sons, fathers, and husbands have a monument in their heart. They don’t need this old stone.”

As I ponder the memorial, he quotes Bismarck: “Nobody wants war, but everyone wants things they can’t have without war.”

Herr Jung looks past the town’s castle, where the ridge of the gorge meets the sky and says, “I remember the sky. It was a moving carpet of American bombers coming over that ridge. Mothers would run with their children. There were no men left. In my class, 49 of the 55 boys lost their fathers. My generation grew up with only mothers.”

“I remember the bombings,” he continues. “Lying in our cellar, praying with my mother. I was a furious dealmaker with God. I can still hear the guns. Day after day we watched American and Nazi airplanes fighting. We were boys. We’d jump on our bikes to see the wreckage of downed planes. I was the neighborhood specialist on warplanes. I could identify them by the sound.”

“One day a very big plane was shot down. It had four engines. I biked to the wreckage, and I couldn’t believe my eyes. Was this a plane designed with a huge upright wing in the center? Then I realized this was only the tail section. The American tail section was as big as an entire German plane. I knew then that we would lose this war.”

The years after the war were hungry years. “I would wake in the middle of the night and search the cupboards,” he says. “There was no fat, no bread, no nothing. I licked spilled grain from the cupboard. We had friends from New York, and they sent coffee that we could trade with farmers for grain. For this I have always been thankful.” He then gently had me look into his eyes and finished his story: “When I think of what the Nazis did to Germany, I remember that a fine soup cooked by 30 people can be spoiled by one man with a handful of salt.”

Standing there with military jets soaring overhead and Herr Jung dedicating his life to sharing Germany’s hard history so other nations (like mine) can learn from it, I recommit myself to sharing the lessons travel can teach us as widely as I can.