Detractors said it couldn't be done: in the 1970s, Gabriele Rausse and Gianni Zonin made it happen 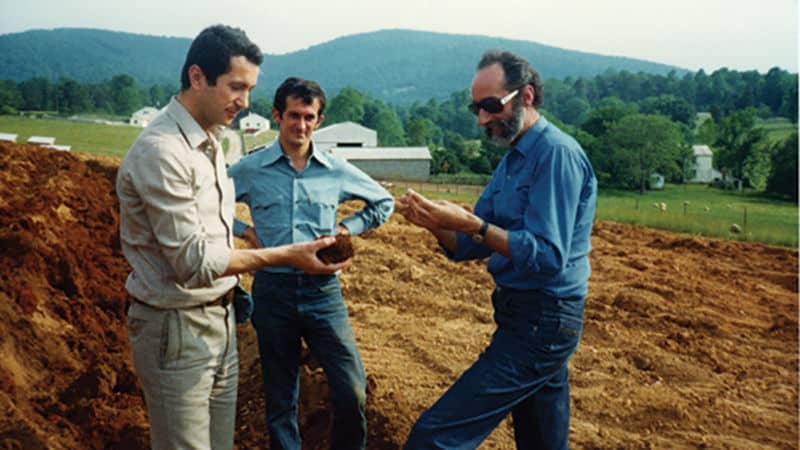 The men in the photo wear jaunty, confident smiles. It’s 1976 and they stand against a backdrop of Charlottesville-area farms and the Blue Ridge Mountains, studying a soil sample from an excavated hilltop.

“What can I say? It was a beautiful day and I love to work outside,” says renowned viticulturist and winemaker Gabriele Rausse, now in his mid-70s, with a laugh. That helped him forget worries that “the project was going to fail spectacularly and end my career.”

Rausse, a native of Italy, was tasked with establishing the East Coast’s first vineyard to grow European wine grapes, Vitis vinifera, at a commercial scale. He was employed by Gianni Zonin, who’d been crowned president of renowned Italian winemaker Casa Vinicola Zonin in the late-1960s. The two had worked together in the Veneto wine region as youths. Rausse made a name for himself helping Australian vineyards grow finnicky European varieties.

“From the beginning, the vines seemed to speak to Gabriele,” says Zonin, now 82. “To me, he was perhaps the world’s most gifted [viticulturalist]. I knew if he set himself to accomplishing this [supposedly] impossible goal, we would succeed.”

THE MAGNITUDE OF THE CHALLENGE

Still, the feat hadn’t been attempted since the days of Thomas Jefferson. That’s because noble varieties are adapted to Mediterranean climates – the Virginia Department of Agriculture and Consumer Services advised they couldn’t survive winter. Plus, they’re catastrophically vulnerable to native pests and diseases.

Just three East Coast vintners were known to have produced wine from homegrown vinifera vines. To do it, they’d used niche, cold-hardy varieties on a very small scale.

These were tiny garden-like plots, says Rausse, which allowed growers to “baby vines and produce a few novelty bottles,” namely, unpalatable reds and a promising batch of eastern-European-style riesling from New York.

Worse, “Their methods were terribly inefficient,” says Rausse. Practices like burying vines for the winter and hand-excavating them each spring would “bankrupt a commercial winery.”

Zonin, meanwhile, planned to install hundreds of acres of noble varieties like cabernet sauvignon, merlot and chardonnay. He claimed the Charlottesville terroir could, in time, yield wines on the level of burgeoning Napa Valley and Old-World titans like Bordeaux or Tuscany.

“This wasn’t some whim,” says Zonin. He spent years searching for properties in Oregon, New York and California – but none matched the promise of the 900-acre Barboursville estate.

“The goal was to establish Virginia as a geographically distinct terroir,” says Zonin.

Yet, as plans moved forward, there was pushback. The wine industry was “going out of its way to publicly ridicule us,” says Rausse. “To them, we were a spectacle, a joke in the making.”

State officials were critical, too. The commissioner of agriculture demanded Rausse attend an emergency conference in Richmond with more than a dozen top agronomists.

“They spent two hours explaining how we would fail,” says Rausse. The commissioner concluded by stating tobacco was the future of Virginia agriculture, not wine. “He said, ‘Throw away the money of the people you work for. But if you try to get a single farmer excited about this? I will step in and shut you down.’”

He consulted with Ukrainian immigrant and viticulturalist Dr. Konstantin Frank – who’d proved vinifera could be grown on the East Coast in 1957 in New York. The two developed a plan.

Rausse planted 3,000 vines in spring of 1976. By early winter, more than 60 percent had died. But the experiment brought a revelation: They needed stronger grafts.

“U.S. nurseries were using inferior techniques and being careless,” says Rausse. California’s mild weather was forgiving. “But in Virginia, the graft has to be perfect. Otherwise, the cold will literally rip the plants apart.”

Rausse and Zonin retooled an old greenhouse to accommodate a grafting operation. They combined Old World techniques with those used by Russians to make wine in extreme northern climates. Six thousand vines were planted in 1977 – and nearly all of them survived.

News of the achievement turned the industry upside down, laughs Rausse. Dubbed the miracle graft, “We sold more than 100,000 vines in 1978 alone.”

The release of Barboursville’s first vintages ignited the Virginia wine industry – which today includes more than 250 vineyards. The winery’s flagship vintage, Octagon, secured its status as a world-class producer in the 1990s. The accomplishment helped Zonin net a Wine Enthusiast Lifetime Achievement Award in 2013.

Rausse left Barboursville in 1981 to help Monticello found what has since become Jefferson Vineyards. He went on to serve as a primary consultant for more than 150 Virginia vineyards and established his own eponymous winery in 1997. Collectively, the accomplishments led The New York Times to crown Rausse the “Father of Virginia Wine.”

Reflecting on his career, Rausse flashes a mischievous grin.

“Life is so strange,” he says. But for the commissioner’s arrogance, “I probably would have given up in 1976 and returned to Australia with my tail tucked between my legs!”

Eric J. Wallace is a freelance journalist, lover of the outdoors and devotee to the search for the good life. His work has appeared in more than 50 local, regional and national media outlets, and he is a contributing editor for Gastro Obscura.