The natural changes of this stage of life 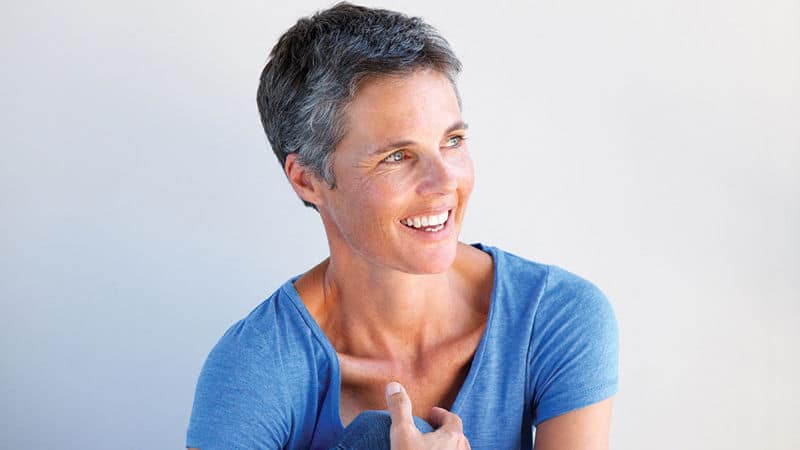 Women going through menopause have different experiences as their bodies respond to the transition. Some have no issues at all, while others have a long list of symptoms such as bothersome hot flashes and vaginal dryness.

“When you become menopausal, estrogen levels decline,” explains Dr. Liz Bigelow of PartnerMD. “The average age of menopause is 51. About 95 percent of women become menopausal between 45 and 55.”

One way to treat symptoms associated with the decline of hormones is hormone replacement therapy (HRT). Conventional HRT in the United States traditionally used synthetic or non-bioidentical hormones, notes the National Institutes of Health. Once prescribed readily, doctors are now taking a more conservative approach to HRT.

The Women’s Health Initiative, launched in the early 1990s and one of the largest health studies in the U.S. involving women, studied the benefits and risks of taking HRT. “That study showed there can be some risks, so it’s not right for everybody,” Bigelow says. “One part of the trial ended in 2002 and another part in 2004 because it showed some increased risks rather than benefits.”

Risks included increased risk of breast cancer, heart disease, stroke and blood clots in some populations. Taking HRT – which includes estrogen and progesterone – comes down to a woman’s decision. “The current recommendation is to use an individual approach based on risk factors,” Bigelow says.

After results from the survey were released, “Many women suddenly stopped taking it,” Bigelow says. “In the decade following [the number of women taking HRT] decreased significantly, from 22 percent in 1999 to 4.7 percent in 2009/10.”

The Women’s Health Initiative showed that adverse effects were more prevalent in women over 60 who had been on the therapy for more than 10 years. “Now our general recommendation is that women who are in their 40s and 50s and are within 10 years of menopause are at low risk,” Bigelow says. “It’s much more acceptable to consider treatment. We don’t consider anyone with a history of breast cancer, heart disease or blood clots. Also, women who have active liver disease, uterine cancer or have had a stroke.”

For women who choose not to take synthetic hormones, there are alternatives such as bioidentical hormones (BHT), man-made hormones that are very similar to the those produced by the human body. Bioidentical compounded hormone therapy (BCHT) includes U.S. Food and Drug Administration (FDA)-approved bioidentical prescription hormones (pre-made by a pharmaceutical company) as well as custom-compounded hormones.

Bioidentical hormones are a natural derivation from plants such as soy and yams. They have the same molecular structure as the hormones that the body produces, such as estrogen and progesterone.

Baylor Rice, owner of South River Compounding Pharmacy, has been working with bioidentical hormones for 25 years. South River is regulated by the Virginia Board of Pharmacy and accredited by the Pharmacy Compounding Accreditation Board. “We have all of our i’s dotted and our t’s crossed,” he says. “We send our products out to a third party to validate.”

Rice looks at hormone levels as well as a woman’s history and symptoms before making a recommendation. “We look at those things as an individual,” he says. “We also look at diet and exercise.”

While bioidentical hormones may have fewer side effects than their synthetic counterparts, “Anything you take can have side effects,” Rice says. “As far as increasing long-term risk, we don’t see that when [the hormones] are monitored.”

However, too much of anything is not good, he adds, so he monitors each individual throughout therapy and acts accordingly.

Anything compounded in the lab does require a prescription, as from a primary care doctor, internist, OB/GYN, physician assistant or doctor of osteopathic medicine.

“Bioidenticals are not taught in medical school, so many doctors don’t prescribe them,” Rice says. “Patients don’t understand why their practitioners don’t tell them that bioidenticals are an option.”

Some women seek out solutions from centers such as Renew Health & Wellness. “Women who come to see us are suffering from the negative side effects of low hormone levels such as interrupted sleep, hot flashes, mood swings, anxiety, depression, low libido, vaginal dryness, joint pain, brain fog, memory loss, weight gain, fatigue and lack of motivation,” says consultant Trish Banks. “Replacing the hormones they have lost gives them back their energy, sex drive, motivation and happiness.”

Renew uses bioidenticals (estradiol, progesterone and testosterone) to raise hormone levels, Banks says. “With the return of good hormone levels and increased energy they become more active, make healthier lifestyle choices and can improve their body composition shedding the menopause middle that is so common with low hormone levels.”

Patients at Renew also receive ongoing assistance through support groups, medical oversight and a variety of other services.

When it comes to lessening the symptoms of menopause, women need to make an informed decision about which treatment they choose.

“I feel like every provider and practitioner has his or her own view of prescribing HRT,” says Bigelow, pointing out there have not been any long-term studies of bioidenticals. “It’s important to have that conversation, and it’s different for every patient. You have to take an individualized approach. Look at the lowest effective dose for the shortest period of time.”

Award-winning writer Joan Tupponce covers a variety of topics, from business and health to celebrity profiles, for local and national periodicals.