Menokin: A Showcase of Crumbled Architecture 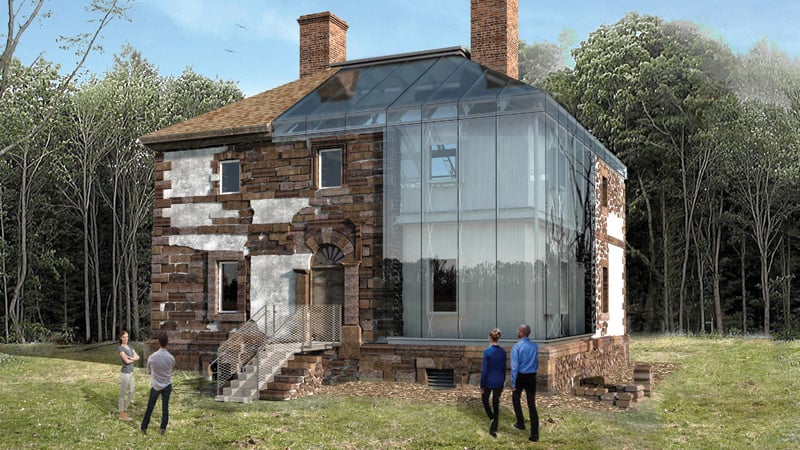 Bounded by Cat Point Creek on the Rappahannock River and surrounded by 500 acres of unspoiled forests and agricultural fields, the ruins of Menokin, an 18th-century mansion near Warsaw, Virginia, are believed to be the first in America to be preserved as open ruins, not a house museum, according to Sam McKelvey, executive director of the Menokin Foundation.

This new approach to preservation will provide unique opportunities for visitors to study Colonial architecture and building arts, McKelvey said. “You can see how things were made here better than at any other site.”

Built 250 years ago in 1769 by Francis Lightfoot Lee, one of seven Virginians who signed the Declaration of Independence, and his wife, Rebecca Tayloe Lee, the two-story Georgian manor home with Palladian features is a National Historic Landmark and one of the best documented Colonial homes in Virginia.

On a recent tour, McKelvey explained that after Francis and Rebecca died in 1797, several different families lived at Menokin before it fell into disrepair in the 20th century. It was severely damaged when a tree fell on it in the 1960s. The roof is gone, but portions of the stone walls and brick chimneys remain intact.

In 1995, Edgar Omohundro donated Menokin and the land surrounding it to the Menokin Foundation, formed by a group of preservationists and local politicians. “They knew Menokin would serve best as an educational tool for architects, archaeologists and historians,” McKelvey said. There are house museums nearby with more significant histories, like Stratford Hall, the birthplace of Confederate Gen. Robert E. Lee, he explained.

The foundation erected a steel canopy over the ruins in 2000 to protect them and slow down deterioration, but the sides are still exposed to the elements. In 2010, a group of architects suggested preserving it under a glass structure that would fill in the walls, floors and roof so that visitors could still see “the bones” of the house.

Inside the visitor center, he pointed out presentation drawings with original floor plans and elevations that show how Menokin looked when it was built. The house was also documented and photographed by the Historic American Buildings Study in the 1940s, and architectural historian Calder Loth photographed the entire interior of the house in the 1960s before the tree fell on it.

Artifacts discovered by archaeologists, who have excavated in and around the house since 1995, were also on display, including a fragment of a clay pipe inscribed with a deer design that may have belonged to the Rappahannock Indians, who occupied and named the Menokin area before they were pushed out by the Colonists.

Inside a storage room at one end of the visitor center, there are piles of salvaged woodwork from the house, including the original front door and hand-carved decorative pine mantels, as well as paneling, interior doors and door knobs. About 80 percent of the original materials have survived. McKelvey said that when the glass house is constructed, some of the woodwork will be reinstalled, but furniture will not be displayed. “We are staying away from furnishings because they date the interpretation. We want to have a conversation about all the families who lived here, from the Rappahannock to the Omohundro family,” he said. 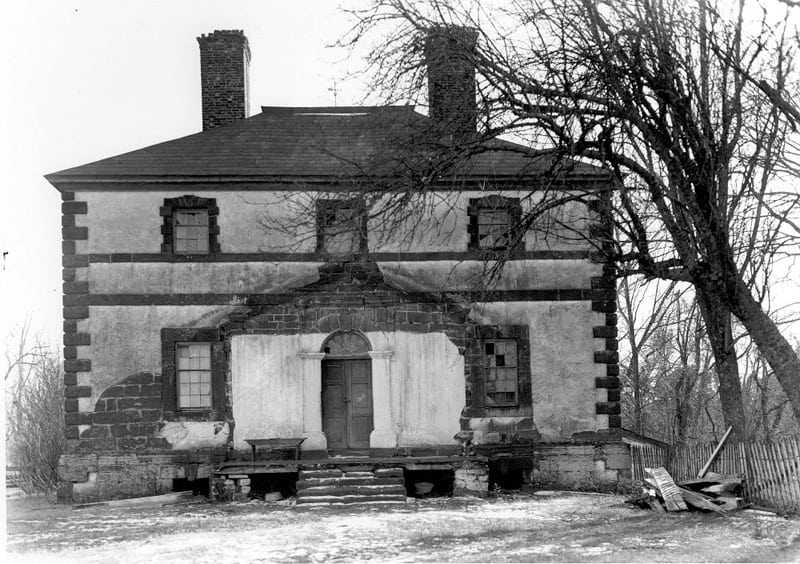 Walking along a trail through a field from the visitor center to the mansion, McKelvey pointed out the archaeological sites of three slave quarters from the 18th to mid-19th centuries. He said more than 200 slaves worked at Menokin over the years. A wood frame ghost building outlining the largest structure was built using historic techniques and hand tools directly over its footprint in the ground. The space is used for educational programs such as historic framing, brick making and lime and mortar classes. In the future, Menokin also plans to offer classes in glassmaking, blacksmithing, plaster, woodcarving and more.

A short distance away, beside the ruins of the main house, McKelvey explained that there were two dependencies on either side of the mansion: an office and a kitchen. Only the ruins of the kitchen are still visible.

Donning a hard hat, he led the way into the cellar of the house. At the barrel vault, where Lee would have kept a supply of Madeira and other wines and ciders, he pointed out fingerprints in the bricks that were left by brickmakers centuries ago. Fingerprints and tool marks made by the builders connect visitors to the stories of the original people of Menokin in a very personal and authentic way, he said.

Inside the main entrance, a cross section of the doorway reveals each layer of construction from the exterior stucco over stonework to the interior brick wall coated in three layers of plaster. Stairs and scaffolding to and through the upper levels provide easy access and overlooks throughout the interior.

Next to the house, the remains of terraced gardens slope to the creek, and a nearby dirt road leads to a launch site that’s available seven days a week for kayakers. Kayaks can be rented from the visitor center. Wildlife sightings are common as the property is part of the Rappahannock River Valley National Wildlife Refuge.

Paula Neely publicized discoveries at Historic Jamestowne for many years and has written about archaeology for National Geographic News, American Archaeology Magazine and DIG into History magazine.