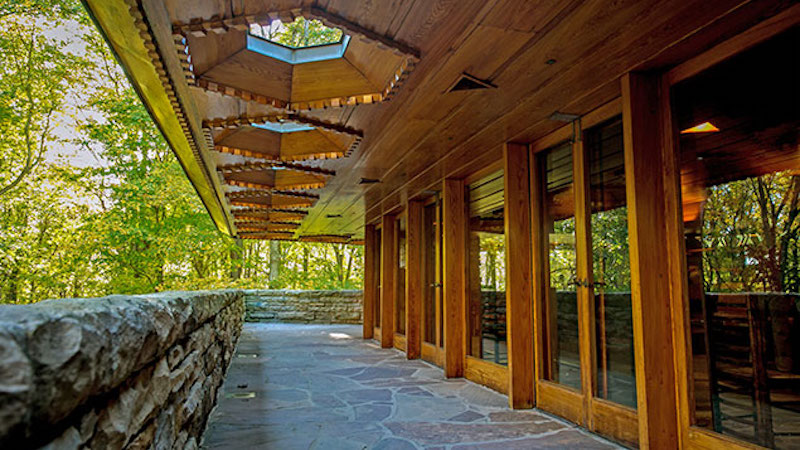 Though great creations can be appreciated from afar, closer examination can enhance admiration – a Picasso or Monet, the Grand Canyon, and a Frank Lloyd Wright design. Wright’s attention to organic architecture – especially as it relates to a building’s site – shine brightly at Fallingwater and Kentuck Knob.

I recently traveled to Laurel Highlands, Pennsylvania, where these two homes are located. I planned the trip with an eye toward making outdoor connections. Both of these Frank Lloyd Wright homes were apt additions to my itinerary. Both exceeded my expectations, as great creations and outdoor connections.

In one principle of organic architecture, as explained by the Frank Lloyd Wright Trust, “The building grows out of the landscape as naturally as any plant; its relationship to the site is so unique that it would be out of place elsewhere.”

That concept speaks for itself at Fallingwater, possibly the best-known Wright house. Edgar Kaufmann Sr. and his wife, Liliane, had used the property since 1916 as a modest retreat for themselves and for employees of the family department store, Kaufmann’s, based in Pittsburgh. Their son, Edgar Kaufmann Jr., was an apprentice at Wright’s Taliesen Fellowship, where the Edgar Sr. and Liliane met Wright. They commissioned him to build a house on the property, requesting a view of the Bear Run waterfall. Wright took their request a step further and built the house on top of the waterfall. The Kaufmanns moved in at the end of 1937.

In Fallingwater: A Frank Lloyd Wright Country House, Edgar Kaufmann Jr. wrote, “Fallingwater was created by Frank Lloyd Wright as a declaration that in nature man finds his spiritual as well as his physical energies, that a harmonious response to nature yields the poetry and joy that nourish human living.”

Fallingwater is set into a hillside and over the waterfall and creek. The house’s stacked shape mirrors the natural pattern of surrounding rocks. A glass door in the living room leads directly to the creek. Open-air terraces afford views of the falls, the creek, and the surrounding forest. Walls of windows, stone floors, and rock features bring the outdoor views and ambience inside. Elements of the natural hillside fuse seamlessly with the house, such as the site’s boulders that create the fireplace hearth and the plants beside the west terrace that grow not in a planter but atop a hillside boulder.

“It takes but an instant to see the character of the house,” wrote Kaufmann, “yet after all these years, there are details and relationships in it which I’ve discovered only recently. Its beauty remains fresh like that of the nature into which it fits. It has served well as a home, yet has always been more than that, a work of art, beyond any ordinary measures of excellence.”

The beauty in the details

Inspired by visiting with the Kaufmanns at Fallingwater, I.N. and Bernardine Hagan (of Pittsburgh’s Hagan Ice Cream), reached out to the famed architect. They wanted a smaller, right-sized second home. Two decades had passed since Wright created Fallingwater – he was 93 and busy designing the Guggenheim. Nonetheless, he accepted the commission, designing hexagonally shaped Kentuck Knob in the Usonian style of his later career.

As at Fallingwater, Kentuck Knob was built into a slope, just below the mountain’s crest – the knob – at 2,500 feet above sea level. “No house should ever be on a hill or on anything. It should be of the hill. Belonging to it. Hill and house should live together each the happier for the other,” said Frank Lloyd Wright.

Kentuck Knob is constructed of sandstone from the property and of red cypress, complementing the surrounding landscape. In another reflection of Wright’s organic building philosophy, one end of the living room seems open to the outdoors: the large window has no panes, making it practically invisible, and matching stone planters inside and out provide a seamless transition.

The 1,200-square-foot house reflects other Frank Lloyd Wright design principles, too. For example,

Both of these Frank Lloyd Wright houses and grounds are open to the public.

Besides being a work of art in itself, the home and guest house contain an abundance of artwork from Tiffany Studios, Diego Rivera, Pablo Picasso, and many more. Visitors can learn more about the house and family at the Speyer Gallery, browse the gift shop, and grab a bite at the café. Find more information, including accessibility tips, at Fallingwater.org.

Tours of Kentuck Knob begin at the visitors center, where guests board a shuttle bus to ride to the home. After the tour, guests have the option of taking the shuttle back or strolling along the Woodland Walk, an easy downhill trail featuring scattered sculptures and a piece of the Berlin Wall. Visitors can also shop the gift shop and purchase food, including hand-dipped Hagan ice cream. Find more information at KentuckKnob.com.

At both houses, knowledgeable tour guides share other intriguing information about Wright’s ideas, his genius and his stubbornness, and changes over the decades of his work. But the homes themselves speak the loudest, through countless details and union with the natural landscape.