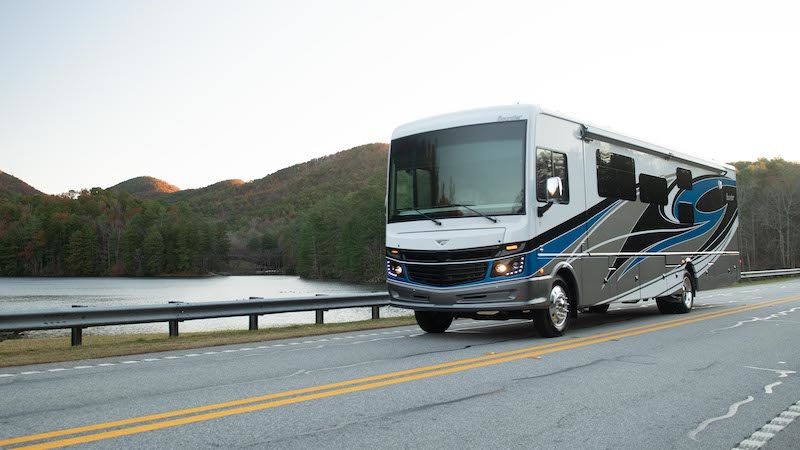 To get you out of the house and onto the road quickly, Fleetwood RV has created an itinerary of presidential road trips in RVs. The 70-year-old motorhome brand has vetted sites in advance and suggested RV-friendly camping locations. 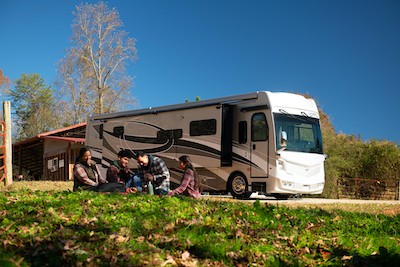 Never has there been a better time to travel by RV than during this pandemic. By toting along your bathroom, hotel room, kitchen, and supplies, you can social distance while gallivanting across the miles. A recreational vehicle also offers the opportunity for multigenerational travel (including family members working or learning remotely!).

> Be sure to confirm open status and state travel restrictions before finalizing your itinerary since destinations are operating on both pandemic and winter schedules. <

There are many presidential museums, libraries, and memorials throughout the country but, due to the pandemic, just a few are currently open to the public. However, the limited accessibility of major sites gives travelers the opportunity to explore a few presidential locations that are off the beaten path. When traveling please be safe – wear a mask, practice social distancing, and wash hands frequently.

Since Philadelphia is the birthplace of American democracy, it’s a must-do presidential stop. In fact, Philadelphia is where George Washington and John Adams, the country’s first two presidents, lived and worked when they led the United States. Although the President’s House was demolished in 1832, an open-air monument and education center mark the site where the house once stood.

To bring history to life, be sure to visit Independence National Historical Park. The park encompasses a collection of sites where foundational events of the newly birthed country occurred. The Liberty Bell Center, Independence Visitor Center, Independence Hall, Congress Hall, and outdoor sites are currently open, and most are free.

Just two and a half hours from Philadelphia, the National Mall has a plethora of presidential and historical monuments and memorials – many of which are outdoors and remain open.

The Washington Monument is a 555-foot-tall marble obelisk that towers over D.C. honoring George Washington, the first president of the United States.

The Thomas Jefferson Memorial features a 19-foot-tall, bronze statue of Thomas Jefferson, one of the country’s founding fathers and its third president, holding the Declaration of Independence.

The Lincoln Memorial honors Abraham Lincoln, the 16th president of the United States, and includes inscriptions from his Gettysburg Address and second inaugural address.

The Ulysses S. Grant Memorial is a statue of President Grant astride a horse and is located at the base of Capitol Hill. Grant was one of the Union’s most-respected Civil War generals and the 18th president of the United States.

The Franklin Delano Roosevelt Memorial chronicles President Roosevelt’s four terms in office through bronze sculptures and his powerful quotes carved in granite. The memorial entrance features a bronze statue of the country’s 32nd president in his wheelchair.

RVers can spend the night at Cherry Hill Park, which offers full hook-up sites and a number of other amenities.

Just outside of D.C., it’s worth a visit to Arlington National Cemetery. Rich with American history on acres of well-manicured grounds, families can deepen their knowledge of our great country.

According to the cemetery website: First Lady Jacqueline Kennedy wanted her husband’s gravesite to be accessible to the American public. In selecting a location, she consulted with the president’s brother, Robert F. Kennedy, and Secretary of Defense Robert S. McNamara – both of whom are also buried at Arlington.

In addition to the presidential graves, the cemetery is the final resting place for many notable Americans, including veterans of the American Revolutionary War, military leaders, astronauts, Supreme Court Chief Justices, and many others.

As recommended for Washington, D.C. visitors, RVers can spend the night at Cherry Hill Park, which offers full hook-up sites and other amenities.

Just a short drive from Washington, D.C., is Mount Vernon – an American landmark and the historic home of America’s first president, George Washington, and his wife, Martha. The Washingtons lived in a two-story Georgian mansion overlooking the Potomac River on an estate that was originally 8,000 acres.

Step back into history and tour the Washingtons’ plantation home, a blacksmith shop, stable, smokehouse, slave quarters, and other outbuildings that supported daily life. An extensive museum shares background on Washington’s life prior to becoming president and the legacy he left behind. The site also includes a memorial to the hundreds of enslaved men, women, and children who worked the plantation.

A unique way to visit Mount Vernon is by boat. Families can travel down the Potomac River and see the Washington Monument, United States Capitol, and other historic sites from a completely different vantage point. The boat trip is narrated and takes approximately three hours round trip. Visitors disembark at Mount Vernon and have four hours to explore the estate. Mount Vernon can also be reached by bike via the scenic Mount Vernon Trail. The ride takes approximately one hour, and bikes can be rented in Alexandria.

Thomas Jefferson’s accomplishments before, during, and after his time as president are nearly unparalleled. He was the author of the Declaration of Independence, founder of the University of Virginia and architect of the Virginia State Capitol building. As the third president of the United States, he doubled the size of the country with the Louisiana Purchase and established the United States Military Academy at West Point.

The 5,000-acre Monticello plantation is an amazing piece of history from the country’s early days. Built atop a mountain, it was home to both the Jefferson family and an extended community of workers that included up to 130 enslaved individuals.

Jefferson was a student of the world with a keen interest in architecture and botany and his estate reflects that. He spent 40 years from 1769-1809 designing, redesigning, building, and rebuilding his home. Monticello has 43 rooms, 13 skylights and eight fireplaces and is completely furnished. In fact, 60 percent of the pieces on display are original to the home. Due to his interest in botany, the estate has extensive flower, vegetable, and fruit gardens. In addition, Jefferson’s tomb and the African American Burial Ground are both located at Monticello.

Jefferson died on July 4, 1826 – 50 years after signing the Declaration of Independence and on the same day as John Adams, another American revolutionary and the second president of the United States who served from 1797-1801.

Before visiting Monticello, dig deeper into Jefferson’s life by listening to podcasts on the Monticello website.

RVers can spend the night at Misty Mountain Camp Resort, located at the foot of the Blue Ridge Mountains and near historic Charlottesville.

Or sign up for our monthly Travel e-newsletter or other e-newsletters tailored for boomers!

Close to Mount Vernon and Monticello, visit the plantation mansion and grounds of James Madison, the country’s fourth president who is also known as the Father of the Constitution. Visitors can explore the lives of James and Dolley Madison through guided tours that take place indoors and out. Montpelier also includes a groundbreaking exhibition on slavery that explores how the legacy of slavery impacts today’s conversations about race, identity, and human rights.

Like visitors to Monticello, RV visitors to Montpelier can spend the night at Misty Mountain Camp Resort, located at the foot of the Blue Ridge Mountains and near historic Charlottesville.

Franklin Delano Roosevelt, the 32nd president of the United States from 1933-1945, guided the country through the Great Depression and World War II. To soothe his polio, he soaked in the natural springs and eventually established a vacation home in Warm Springs. The home was nicknamed the “Little White House” and is one of Georgia’s most visited historic sites.

RVers can spend the night at Pine Mountain RV Resort. Nestled in the beautiful Georgia pines, the resort is packed with amenities, including a fitness room, pool, hot tub, steam showers, as well as an on-site concierge.

Just 20 minutes from Nashville is the home of Andrew Jackson, the country’s seventh president. The mansion, which has been carefully restored with most of Jackson’s original belongings, is open for tours. Visitors can also explore the grounds of Jackson’s cotton plantation that includes historic buildings and markers, the tomb of Andrew and his wife, Rachel, as well as the field quarters and a hiking trail.

RVers can spend the night at Safe Harbor RV Resort. Located on a peninsula with beautiful views of Percy Priest Lake, it’s a premier RV destination in Middle Tennessee.

While he eventually rose to the highest position in the United States, Abraham Lincoln truly came from hard-scrabble, humble beginnings. Follow the Kentucky Lincoln Heritage Trail to a number of notable sites where Lincoln, the country’s 16th president, spent the first seven years of his life. Sites along the trail include a replica of the tiny log cabin where Lincoln was born, the farm along Knob Creek where he lived with his parents for five years, and The Lincoln Museum. The museum highlights the major events in Lincoln’s life through life-size dioramas, period artifacts, and a collection of wax figures.

RVers can spend the night at Elizabethtown Crossroads Campground. The campgrounds are close to a variety of attractions, including Abraham Lincoln’s birthplace, Mammoth Cave National Park, and Louisville.

Harry S. Truman, the 33rd president of the United States, spent 175 days of his presidency at the Little White House in the warm climate of Key West. The home was originally built in 1890 as housing for naval officers. Guided tours of the home and Florida’s only presidential museum are conducted regularly.

RVers can spend the night at Bluewater Key, a luxury RV resort. Nearby is a golf course, the Shipwreck Museum, and Ernest Hemingway Home & Museum.

This colossal stone edifice in the Black Hills of South Dakota took 14 years to complete from 1927 to 1941 and cost approximately $1 million. The heads of Presidents George Washington, Thomas Jefferson, Theodore Roosevelt, and Abraham Lincoln are 60 feet tall and were carved into the granite face of Mount Rushmore with dynamite. The four presidents were chosen to represent the nation’s birth, growth, development, and preservation.

RVers visiting Mount Rushmore can stay overnight at American Buffalo Resorts in the heart of the Black Hills.

Your traveling home for presidential roads trips in RVs

Fleetwood RV is celebrating the 35th anniversary of the Bounder this year, which has the distinction of being one of the best-selling motorhomes ever. Other popular homes include the Discovery, Pace Arrow, and Southwind.