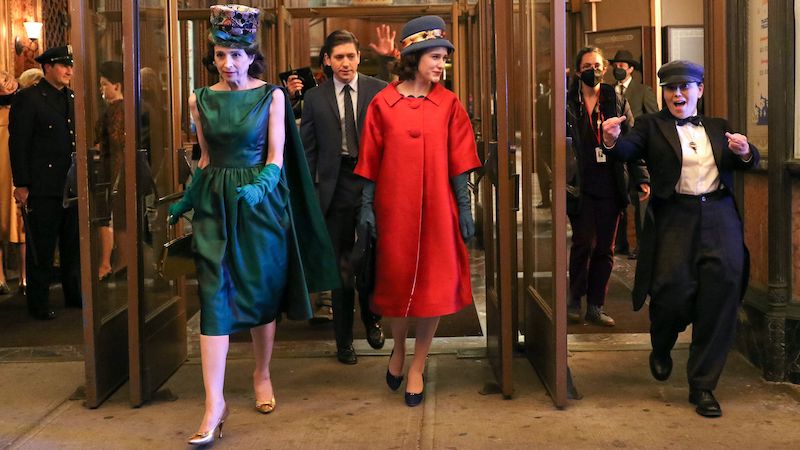 Scott Huver in “Variety” shows how “Hacks” and “Marvelous Mrs. Maisel” have found a way to uniquely focus on stand-up comedy.

In earlier sitcom eras, the stage personas of seasoned real-world stand-up comics made for reliable main characters, but rarely were they actually performing jokes professionally onstage. Only later would supporting characters dip into the standup arena – think “Full House’s” Dave Coulier or “Facts of Life’s” Geri Jewell – until finally Jerry Seinfeld and Garry Shandling took their funnymen and, to varying degrees, their craft, center stage on “Seinfeld” and “The Larry Sanders Show.”

Today, however, two widely admired, multi-Emmy-nominated comedies – “Hacks,” set in contemporary times, and “The Marvelous Mrs. Maisel,” at the midcentury dawn of a new style of comedy – are taking deep, hyper-detailed and subtly nuanced dives into the stand- up world, both looking uniquely thorough a female lens.

Ironically, both series are headlined by actors known for their stage, film and TV work without any stand-up background – Jean Smart as Deborah Vance on “Hacks,” Rachel Brosnahan as Midge Maisel on “Maisel” – as well as supporting actors with genuine experience in the stand-up spotlight, though playing non-stand-up characters – Hannah Einbinder and Alex Borstein, respectively.

With each of the four actresses vying for Emmys this year, it’s clear that audiences are finding more than just laughs in nightclubs and showrooms; they’re finding drama, pathos and richly drawn characters, too.

“It’s really a difficult subject, profession, ego, etc., to do justice to,” says Einbinder, who’s touring her own stand-up show around the country. “A lot of comedians tell me how much they feel that [the fact that] ‘Hacks’ has accurately depicted stand-up was a shock to them and has been really rewarding. Because it is not something that you can really write about if you haven’t experienced it. And a lot of our writers have a performance background.”

Borstein, a seasoned improv performer and comedy writer, also tried her hand at stand-up early on and recently recorded a forthcoming stand-up special, which she calls “deeply personal and wildly fictitious.”

Although her “Maisel” character, Susie, remains behind the scenes as a manager, Borstein remembers well what lured her to try stand-up.

“It was the quickest way to get on stage,” she recalls. “You could just go get in front of an audience to see if you are funny and try exploring.”

“Hacks” executive producer Jen Statsky, who dabbled in stand-up early in her career, says that there’s something authentic, captivating and unfiltered about a person on stage.

“It’s just that person being pretty vague and raw standing on stage, talking directly to an audience, and that’s the most direct artist-to-audience connection that can exist,” she says. “It’s really an incredible thing to witness, because it’s really scary, and, honestly, brave to do it.”

“Hacks” is available on HBO Max and “The Marvelous Mrs. Maisel” on Amazon Prime Video

The stand-up element is “one of the trickier parts of the show,” adds executive producer Paul W. Downs, given Deborah’s overarching journey to break out of her successful but safe and predictable Vegas act.

“Deborah joked about attributes of her own person that weren’t necessarily true, but she made herself the butt of the joke,” Downs adds of the Season 2 arc. “We wanted her to talk about some of the actual stuff that’s true to her life and make fun of that.”

Executive producer Lucia Aniello notes that Deborah’s act is “not really about the stand-up jokes,” but why she’s telling the stories she is: “They’re not always supposed to be the funniest jokes. Sometimes they’re supposed to say something about how the character’s feeling about themselves or the world.”

The “Hacks” team, overall, are constantly impressed by Smart’s facility to portray a top-flight stand-up comic.

“When we met with Jean, she said [she] always wanted to be a stand-up,” Downs says. “It was so kismet and wild that she was like, ‘When I was 10, I went to a Halloween party and everyone was dressed as princesses and witches, and I dressed as Phyllis Diller, and other 11-year-olds did not, necessarily, know who that was.’”

Einbinder adds that, in a way, Smart’s been doing standup her whole career since she is a stage performer.

“In conversation or in a group, she’s an amazing storyteller,” she notes. “When Jean starts a story, everyone gathers around and listens, and it’s really a beautiful thing to witness. So many elements of Jean’s natural charisma translated into Deborah’s stage performance. It felt like such an organic transformation.”

Now, Einbinder recognizes her “Hacks” profile has earned her goodwill with her stand-up tour audiences and is fully in touch with the surreal nature of her current existence. “I’m certainly no Deborah Vance, and we’re very different comedians, but I’m experiencing all these things in a really meta way,” she says.

Nevertheless, she’s there for all of it. “What I love about stand-up is when I get on stage, I have completely fine-tuned every layer of every intention of everything that I am saying,” she says. “And it feels like the best version of myself, this ideal version of myself that would be collected and poised in a way that I maybe am not always, when I’m sort of just free-balling it in the world. I think that’s kind of my favorite part.”

Tony Bennett makes an appearance on “The Marvelous Mrs. Maisel”

“Maisel” executive producer Amy Sherman-Palladino, meanwhile, built her show from a personal perspective: her father was a professional stand-up in the era of Catskills nightclubs and café society.

“I grew up with those fairy tales – and I only say they’re fairy tales because I wasn’t there; I grew up in the San Fernando Valley, nothing good ever happened there,” she says. In her father’s telling, “everything was smarter and faster and funnier and more colorful and lively, and there was just energy everywhere.”

When launching the show, she chose to have the lead be a woman simply because she “thought it would be more fun” and she likes dresses.

“So, sorry, Dad, you’re a woman,” Sherman-Palladino quips. “It was put at a time when comedy was sort of starting to shift a little bit, going from the ’50s into the ’60s, the comedy became more about looking at the world around you, commenting on the world around you, commenting on politics, looking at social norms, looking at all the things. In the ’50s, it was a little bit more, ‘Take my wife, please.’”

The boundary-breaking real-world standup Lenny Bruce, who subsequently became a recurring character in the show, set the template for the path Sherman-Palladino saw Midge following.

“Midge, at her heart, at her core, she’s an emotional comic,” says Palladino.

“She has a tight 10 [minutes] planned and two minutes before she walks on stage, something happens, she has a conversation or she sees something, and all of that goes out the window and she just speaks from her brain and her heart and what’s going on.”

Executive producer Dan Palladino still marvels at how Brosnahan, a dramatic performer, auditioned for the series with literally no comedy credits whatsoever.

“No one had given her any kind of chance on comedy, so we thought it was very ballsy that this accomplished actress was willing to come in and audition for us playing a standup comic,” he recalls. “And that’s what stand-up comedy is: it’s like you stand naked in front of a bunch of people.”