Home » Yesteryear » History » Recollections of 9/11 Seared in Our Souls

9/11 losses are seared on our souls 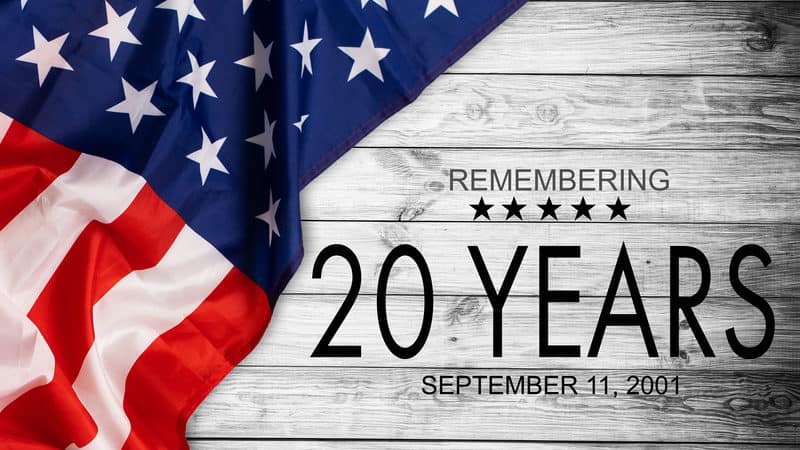 On a sunny, cool November Sunday in 1963, I sat 9 years old and cross-legged watching our family’s oval-faced RCA television. Above me, my mother did her ironing. On the black-and-white screen, a horse-drawn caisson bore JFK to the Capitol Rotunda to lie in state. My mother cried, her tears hissing under the iron.

This is my image of Kennedy’s assassination. It’s indelible, mythic in my head. I hear Mom’s teardrops sizzle, Cronkite intone, the lonely clopping of the horse on Constitution Avenue. I feel my legs cramp under me, recall the wish to stretch, but I sat it out until my mother left the room, unwilling to see more. For the first time in my young life, I was inundated with somberness and death. I sat respectfully still in their presence.

My generation was forever changed by those images. We ask one another even now: Where were you when Kennedy was shot? The 1960s, so formative for boomers, was a season of heartbreak. Bobby, Martin, body bags and funerals — these losses have not dimmed because we did not let them.

The televisions were color four decades later when planes took down the Twin Towers, grooved a Pennsylvania field and pierced the Pentagon. The hundred million Americans who watched the scenes from afar, the millions there in New York and Washington, were riveted by the same searing sense that they were watching their own metamorphosis. The blacksmith of history pounded another image into every mind that saw it, working a change that will never change back.

Tragedy defines America as much as our good fortune. We are a purposeful people who do not turn from the job at hand. We mourn together with the same will we work and play. We will sit with our national memory of September 11 and count the ways we are, again, different.

David L. Robbins is a best-selling novelist who wrote regularly for Boomer.

The following images and “Recollections of 9/11 Seared in Our Souls” ran in the Boomer magazine print edition on the 10-year anniversary of the tragedy. Once again, we remember the events of that fateful day.

Recollections of 9/11 Seared in Our Souls

On Tuesday, September 11, 2001, terrorists hijacked four U.S. jetliners, crashing two into the World Trade Center in New York City and a third into the Pentagon. The fourth crashed into an empty field in western Pennsylvania after passengers and crew members attempted to take control. Nearly 3,000 people were killed that day.

Egan’s husband, Michael, worked for AON Corporation – as did his sister – in the South Tower of the World Trade Center. Anna told the New York Times she was able to have a brief phone conversation with him before he died:

“Michael initially started evacuating, pushing his people into the elevators. My understanding is that they managed to get down to the 78th floor and then he was sent back up, along with 15 other people. At that point, Michael decided to go to the floor above in hopes that it was a bit more comfortable.

“He called at that point, and told me they were stuck on the 105th floor. There were 15 people lying on the floor, they couldn’t breathe, it was unbearable. I asked him about his sister, Christine, and he said he had sent her out a while ago, but he didn’t know if Christine made it out. They couldn’t breathe where he was.

“I was about to ask him who are the people with you, that’s when we both saw it. We both said, ‘Oh no, I love you darling.’ The line dropped and the building fell.”

Oesterich was a Merrill Lynch employee at the World Financial Center, across West Street from the two towers. His story appeared on netwert.com.

“I was at my desk when the first plane hit. … I ran to the other side of my office and saw fire raining down. Parts of the building was falling and on fire, along with paper and other things. … The impact hole was huge; it looked like 10 stories were burning. …

“I was walking around the desks at my office when the other plane hit. … One man in my office saw the plane go in and screamed it was another plane. We ran again to the window. This time it was much lower in the tower and seemed worse than the first because it was so much closer to my office. People on the street could feel the fireball. My manager started yelling – ‘Everybody get the f— out! Everyone get out NOW!’ …

“I walked out and just saw a crowd staring up at the burning Towers. It was surreal. …

“I stood there for a minute and watched the fire climb up, down and around the towers. I heard sudden cries from the crowd and looked up and saw people falling/jumping to their deaths. And I wish I could say there was only one. It got worse as the fire spread.

“I then moved next to the marina and watched a bit more. … The picture I will never forget. At about the 60-70th floors, people were hanging out windows trying to get air. Literally holding onto the side of the building waving a T-shirt to try to get someone’s attention. I couldn’t watch any longer.”

Perkal was a deputy general counsel in the Office of the Secretary of Defense in the Pentagon. These are excerpts from his account a few days later on McSweeneys.net.

“The airliner crashed between two and three hundred feet from my office in the Pentagon, just around a corner from where I work. … A slightly different calibration and I have no doubt I wouldn’t be sending this to you. My colleagues felt the impact, which reminded them of an earthquake. People shouted in the corridor outside that a bomb had gone off upstairs on the main concourse in the building. No alarms sounded. …

“One of the attorneys who works for me [had] called in sick Tuesday. The satellite office he works in was utterly destroyed. …

“Another friend, who works for a government contractor in the Army section of the Pentagon that took a direct hit, crawled out of what was his office to safety.

“[Outside,] people walked around in a daze, looking at the gaping hole and flames, appearing uncomprehending. The skies, normally leaden with commercial jets, were empty. Helicopters circled the building and an occasional F-16 streaked by. Sirens blared from what seemed hundreds of emergency vehicles. I lost count of the hook and ladder companies. People left their vehicles in the parking lot and started walking the bridges towards D.C. Hundreds of F.B.I., Secret Service and Defense Department plainclothes investigators were deployed in the parking lot, recording witness statements. Photographers by the dozen made their way to as close to the flames as they could bear.

“Two explosions, a few minutes apart, prompted me to start walking. I walked for three miles past office buildings, restaurants and shopping malls. Everything was closing down, public transportation ceased, people were milling about the streets unsure of what to do. Cells phones stopped working, and traffic was total gridlock. …

“I’m still processing the events of this past Tuesday. … An attorney I’ve known for fifteen years was killed instantly when the plane went into the building. He had retired two weeks ago and went to work for a government contractor. He was in the Pentagon to pitch a contract to a lieutenant general. Everyone in the room died from the explosion of jet fuel.

“A woman I met told me that on Tuesday morning she went to get a cup of coffee. When she tried to return to her office, it was gone and two of her colleagues were gone as well.”

Tom Burnett Jr. made four phone calls between 9:27 and 9:54 a.m. to his wife Deena from United Airlines Flight 93. During the third call, he told her: “They’re talking about crashing this plane into the ground. We have to do something. I’m putting a plan together.” Authorities say Burnett and several other passengers stormed the hijackers and the plane crashed in rural Pennsylvania – killing all aboard but falling far from any landmark or population center. Here is the transcript of the last call, from tomburnettfoundation.org:

Deena: “Tom?”
Tom: “Hi. Anything new?”
Deena: “No.”
Tom: “Where are the kids?”
Deena: “They’re fine. They’re sitting at the table having breakfast. They’re asking to talk to you.”
Tom: “Tell them I’ll talk to them later.”
Deena: “I called your parents. They know your plane has been hijacked.”
Tom: “Oh, you shouldn’t have worried them. How are they doing?”
Deena: “They’re O.K. Mary and Martha are with them.”
Tom: “Good. [Long pause.] We’re waiting until we’re over a rural area. We’re going to take back the airplane.”
Deena: “No! Sit down, be still, be quiet and don’t draw attention to yourself!”
Tom: “Deena! If they’re going to crash this plane into the ground, we’re going to have do something!”
Deena: “What about the authorities?”
Tom: “We can’t wait for the authorities. I don’t know what they could do anyway. It’s up to us. I think we can do it.”
Deena: “What do you want me to do?”
Tom: “Pray, Deena, just pray.”
Deena: “[Long pause.] I love you.”
Tom: “Don’t worry. We’re going to do something.”

Timeline: The Morning of Sept. 11

Hijackers crash American Airlines Flight 11 into the North Tower of the World Trade Center, killing everyone onboard and hundreds in the building. City firefighters and police officers rush to the scene. Port Authority Police Department officials begin evacuating the site.

Hijackers crash United Airlines Flight 175 into the South Tower, killing everyone on the plane and hundreds in the building.

Hijackers crash American Airlines Flight 77 into the western portion of the Pentagon, killing 59 onboard and 125 civilian and military personnel in the building, resulting in a fire that severely injures another 106 people.

The Federal Aviation Authority grounds all flights over or in route to the continental United States.

The White House and U.S. Capitol are evacuated.