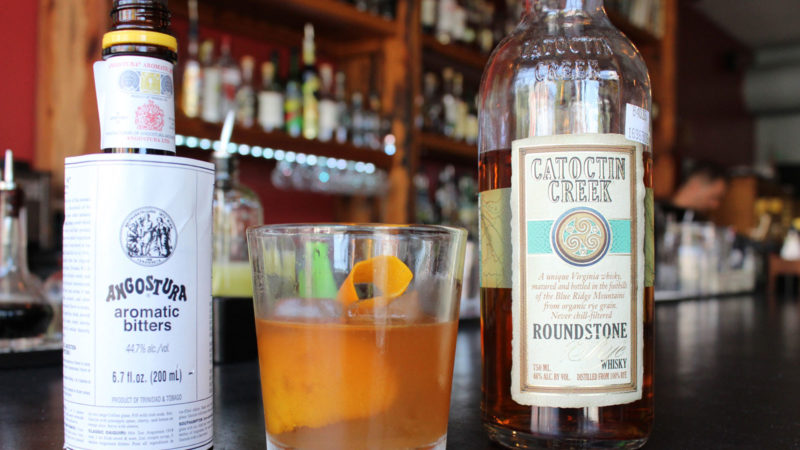 Is it time for a drink? I couldn’t agree more. If you’re feeling adventurous, step up and let’s talk. What are you in the mood for? What’s your favorite spirit? What two adjectives describe your ideal drink right now?

For me, it’s summertime and I’m having a daiquiri. Put away the blender! The classic daiquiri was shaken and served up, and made simply with rum, fresh lime juice and sugar for balance. A proper daiquiri should be refreshing and citrusy; not too boozy and not too sweet. It should showcase the rum, not mask it. Choose a great rum – enjoy a great daiquiri. My go-to is a version we call Sunday Lemonade, matching overproof white rum with rhum agricole for a boozier, grassier experience. But then, I’m a cocktail geek. You might prefer something more straightforward.

In the past few years, Richmond has stirred and shaken itself into a burgeoning mecca of discerning dipsomania. Most fine-dining establishments in the city present a thoughtful cocktail list, and many of them know that you stir a martini and shake an egg white into a whiskey sour. At certain places you might even be asked what brand of vermouth you’d like in your Manhattan.

At The Rogue Gentlemen cocktail bar and restaurant in Jackson Ward, we take the conversation one step further. Our seasonal drink menu also offers a bank of adjectives to help guide your Dealer’s Choice cocktail. Sometimes that points to an old classic and other times we mix up an improvised concoction built from our array of spirits and cordials. As I always tell people, we’re very serious about playing around.

Patrons ask me quite often for “your version of an Old Fashioned.” This, of course, is an infinite portal. The basic breakdown of an Old Fashioned consists of a strong spirit, some sugar to soften the edge, and aromatic bitters to spice up the whole and enrich the base. Within that parameter the possibilities are endless. I love to play with the Old-Fashioned formula and often feature a fun interpretation like the Grassy Knoll from our spring ’15 menu.

The complete history of Richmond’s craft cocktail renaissance would fill a book, stemming all the way back to Dale DeGroff, the uncontended godfather of modern American cocktail craft. But there are a few RVA characters who stand out from the crowd.

Mattias Hagglund (cofounder of Heritage) had been managing the bar at Bistro 27 in 2006-2007 when his sister and brother-in-law took him to the newly opened Death & Co in New York City, which he says blew his mind all the way open. Inspired, he started learning classic craft and writing cocktail menus that advanced beyond the “flavored vodka, muddled herb, maybe a cordial to modify and some kind of acid” formula, and opened a restaurant in New Jersey.

He eventually moved back to RVA to run the bar at Comfort, tasked with building a cocktail program that would showcase the restaurant’s collection of whiskey and other fine spirits. There he honed his classic craft and technique, and in 2012 he turned Comfort’s bar over to Derek Salerno and opened Heritage, which helped launch the competitive cocktail culture now booming across the city.

At the end of a long night, Mattias (like many of his counterparts behind the stick) sits down gratefully with a Negroni – though if you ask for Death & Co’s famous Oaxaca Old Fashioned, you may witness him “accidentally” measure out a little extra for his devil’s cut of the lauded drink.

THE SEASON FOR TALENTED MIXOLOGISTS

A stone’s throw away in Jackson Ward is Saison, our neighbors and good friends who recently took our crown for Best Cocktail Program at the 2016 Elby Awards. Saison was established as a beer joint and transformed to include a craft mixology bar in 2013 under the legendary Chris Elford (who since moved on to Seattle).

When it comes to creative cocktailia, there’s more than one way to skin a cat. Kjell Anderson of Metzger ran a full cocktail menu featuring vermouths, aperitifs and other non-ABC-controlled ingredients, while waiting for their license to crawl through the miles of red tape.

It seems everywhere you look there’s a new cocktail program sprouting up in RVA. Which is good, in a system where competition breeds quality. The craft mixology scene in Richmond is limited only by ABC regulations and the imaginations of the stars behind the stick who work assiduously to serve liquid excellence to eager imbibers. And it’s only getting better.

So what’s next for you? Feeling stirred? Try a Vieux Carre. Shaken? Go with our minimalist revival of this old tiki classic called the Jungle Bird. Still not sure? Let’s slam a shot of Fernet Branca and talk about it.

Thirsty now? Find the recipes for all the aforementioned alcoholic drinks here.