The Benefits of Native Species

How your yard can help save – or hurt – the world 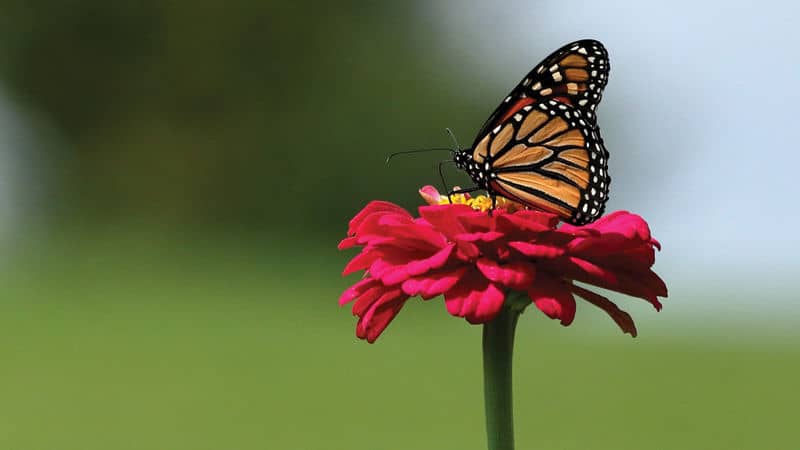 All demonstrate the harm caused by the loss of native habitat and the infiltration of non-native species (called “invasive” when they harm natural resources, economic activity and/or humans).

The population of monarch butterflies – amazing insects that migrate more than 2,000 miles – has declined precipitously, in part because their caterpillars eat only milkweed, which is disappearing. English ivy chokes out surrounding ground plants and covers and kills trees. The American chestnut tree population has been decimated by a fungal pathogen accidentally imported from Asia.

And right here in Richmond: “The James River Park has areas where the only thing native at this point are the mature trees,” says Bill Shanabruch, who is on the park’s Invasive Plant Task Force. “We’re going to lose those because [invasive] vines are killing them.”

At first glance, the harm seems superficial, or even just annoying: so sad about the American chestnut, but other trees can take its place – right?

No, not so much. “The American chestnut was an essential component of the eastern U.S. forest ecosystem,” says the American Chestnut Foundation. Reaching up to 100 feet tall and numbering in the billions, the trees were an important food source for a wide variety of wildlife and a source of income for rural communities, who used the nuts and the lumber. No more American chestnuts roasting on an open fire.

Nor is one plant an even swap for another. Native wildlife and native plants co-evolved and thus are codependent for survival, explains Shanabruch, who is also owner of Reedy Creek Environmental and former biologist for the Virginia Department of Environmental Quality. “That’s why if you [lose] that native plant, [an insect] won’t suddenly be able to use that non-native plant.”

Then, when monarchs and other host-plant-specific insects disappear, they’re not available to pollinate or to provide food for birds and other wildlife – and so on up the chain.

To make matters worse, non-natives, like English ivy, can drive out the natives. Wavyleaf grass, newly arrived in Virginia but already widespread, outcompetes other ground-layer species and suppresses shrubs and trees.

And the effects multiply, like falling dominoes. “Plants like wavyleaf grass alter the forest floor, which can alter the entire forest,” says Kevin Heffernan, stewardship biologist with the Division of Natural Heritage in the Virginia Department of Conservation and Recreation. Native plants can’t compete, but other invasives can, since native predators and pathogens don’t feed on them. Meanwhile, “The insects, birds and animals that depend on native species will suffer a loss of habitat, of food and places to live.”

In 2019, researchers at Virginia Tech documented just how far-reaching the effects are. A team led by Jacob Barney, associate professor of environmental science at Virginia Tech, completed the first comprehensive meta-analytic review of the ecological impacts of invasive plants on native and non-native animals. The research discovered that invasive species displace native plants and animals, reduce wildlife habitat and alter natural processes. 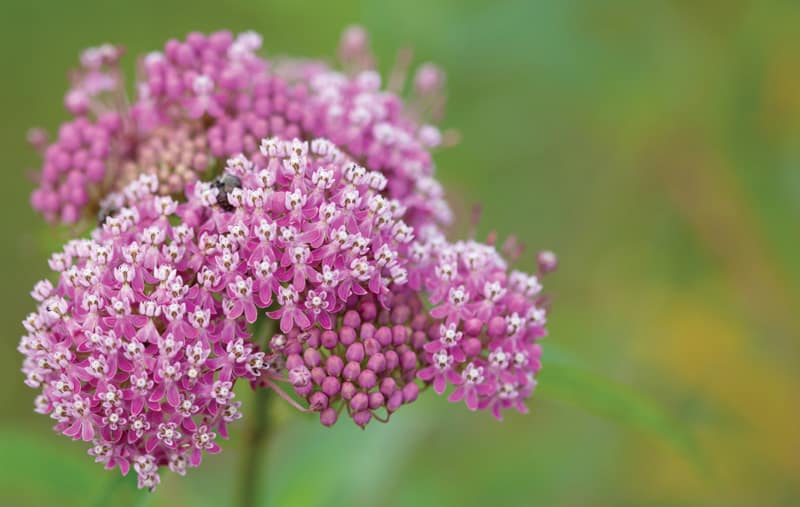 “The longer an invasive plant is in the ecosystem, there’s fewer and fewer animals in that ecosystem,” Barney told Radio IQ public radio. “So, we could look at the place we’re standing in now, count the number of animals, and in 30 or 40 years, there’s likely to be even fewer here.”

Invasive plants hurt humans, too, causing an estimated $120 billion in damages each year in the U.S.

The solution calls for a trowel and a weed wacker: encouraging and planting natives plus ridding the environment of non-natives.

IN THE EYE OF THE BEHOLDER

Conversely, a harmful plant loses its appeal – like English ivy. “Things aren’t supposed to be green in the winter here other than a few pine trees and holly,” he says. “When you see all this green in the winter, that means it’s probably covered with invasive plants … You need to appreciate brown in the winter and what that represents.”

Similarly, Shanabruch says, we need to accept “messy.” For example, rather than trimming back ornamental grasses in the winter, leave them till spring. “Over the winter, it provides habitat complexity, which provides places for insects to overwinter; it provides seeds for birds and other animals to eat during the winter … People like something less messy, but from a habitat perspective, messy is really good.”

Or as Art Evans, entomologist and co-host of “What’s Bugging You” on VPM public radio counsels, “Lose the lawn, leave the leaves.” 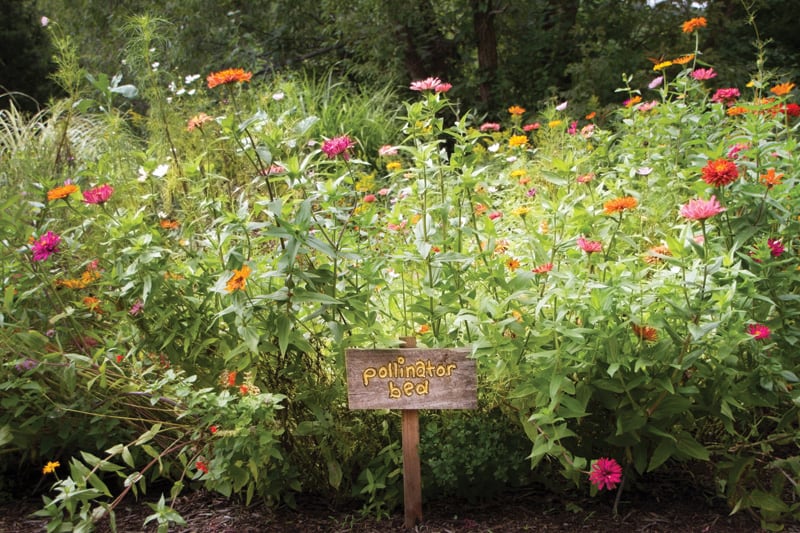 An amazing number of attractive plants are native to Virginia and contribute to a healthy ecosystem. Like milkweed. According to the U.S. Forest Service, “Common milkweed is Nature’s mega food market for insects. Over 450 insects are known to feed on some portion of the plant.”

The emphasis now is on planting natives that benefit pollinators, such as native bees, butterflies and moths, says Heffernan.

Another benefit: natives require little maintenance when planted in their natural habitat (sun or shade, moist soil or dry, etc.). That means less fertilizer, herbicide or pesticide to run off into the waterways and less need to water – and less homeowner time.

Sure, some non-native species are beautiful: wispy mimosa trees with fluffy summer blooms; periwinkle, a dainty groundcover with delicate spring blooms; and English ivy, hardy and evergreen. And don’t overlook the insidious Bradford pear tree, those sprawling trees with white spring blooms, often planted in median strips, malls and yards. Pretty, sure, but not only are the branches susceptible to storm damage, the fruit creates callery pear trees, an invasive that grows three-inch thorns that can puncture tires.

For these plants and others, beauty hides an insidious nature.

“We can clean up James River Park, but it’ll just be ongoing because [invasives] just keep coming in from residential properties,” says Shanabruch.

Similarly, in Virginia’s natural area preserves, which protect Virginia’s biodiversity and rare species: “One of the top management issues on the preserves is invasive species,” explains Heffernan. “You can’t just buy a plot and protect it for the rare species without controlling the invasives.”

Eradicate whatever invasive plants “grace” your yard, no matter their apparent appeal.

“That’s where part of the cultural shift has to come in,” Shanabruch says.

So choose your plants and your plant providers carefully.

And be Earth-healthy. Like savoring a well-made vegetable dish, you can learn to value the natural nutrition of your yard and the landscape.

MAKE A DIFFERENCE BEYOND YOUR OWN YARD

Through financial support or volunteer workdays for invasive plant removal

Learn invasive identification and removal techniques by volunteering alongside a Virginia Master Naturalist or other expert, suggests John Zeugner with the Friends of Bryan Park. “The survival of our native plants, fauna, habitats and biodiversity depends on invasive removal!”

BE A PLANT NARC!

Since it was discovered in Maryland in 1996 and in Virginia in 2005, wavyleaf grass has spread to at least 20 Virginia counties.

“We’re trying to get word out and get people to report it,” says Heffernan. “This invasion we can’t eradicate but we can slow the spread and help other states slow it … The longer we wait, the harder it is to take care of.”

The low-lying, trailing grass is adapted to forest understory. It produces a sticky substance that allows the seed to adhere to passing hikers or animals.

Choose from several ways to report wavyleaf grass and other invasive species at DCR.Virginia.gov/natural-heritage/invsp-whatyoucando-map.

Plants and information in Central Virginia

BOOMER editor Annie Tobey is on a never-ending mission to create her own low-maintenance, Earth-friendly yard.