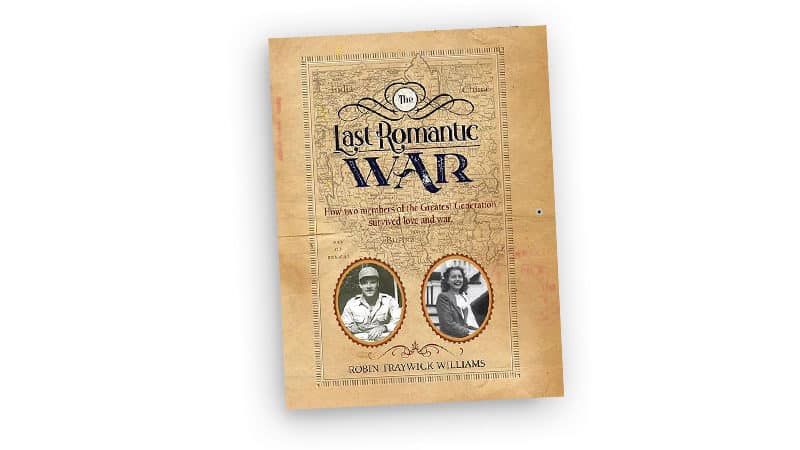 Writer Robin Traywick Williams tackled a project that many family historians would envy. The exploration of her parents’ courtship resulted in a well-researched, 312-page book. Since the “wartime romance” included her father’s service during World War II, The Last Romantic War: How two members of the Greatest Generation survived love and war weaves military history with a personal love story.

The idea for her book sprang from the stories her father, Bo Traywick, told of his experiences in the Burma Campaign as well as his tales of courtship. But as she began delving into her mother’s side of those early years, Williams became more impressed with Flo Neher Traywick’s story, too. She also realized that readers would appreciate Flo’s perspective.

The tale begins with a blind date, of sorts, at Fort Benning in 1942. Capt. Bo Traywick was asked to entertain the sister of a fellow officer. As the reader might guess, that blind date was Flo Neher.

Williams uses a first-person format throughout the book. Although her parents’ story could pass as a historical novel, Williams fully flaunts her connection. She blends the words of her father as he regaled the family with his tales, with past-tense narrative, and with notes of history and culture.

Overall, the strategy works well. It carries the reader easily from Bo and Flo’s first meeting and falling in love, through breakup and wartime life on the home front and the battle front, and eventually to the wedding. Occasionally, the reader is reminded that the narrator brings partiality and subjectivity to the book. For example, frequent references to the “peanut gallery” seem jarring reminders that this is someone else’s story. But this is, after all, a family history.

Besides memories and recordings of her father’s storytelling, the author used her parents’ scrapbooks, diaries, and letters and interviews with her parents and siblings, as well as other contemporaneous sources, memoirs, and significant research. The result is a nicely researched snapshot of elements of war and culture in the 1940s.

Bo Traywick’s experiences as a soldier and officer provide much of the meat of the book. These chapters provide views into a less-covered theater of World War II in Southeast Asia, the CBI, or China Burma India. The chapters include people and anecdotes, amusing and tragic, of British jungle warfare school, the building of the Ledo Road (aka Stilwell Road or Pick’s Pike), the Burma Campaign, Chinese soldiers that worked alongside U.S. troops, battles, malaria, and even R&R excursions in India.

Stories from the states offer a personal look into the home front as well. History books will tell of victory gardens and sacrifices, but often from a birds’ eye view. Williams’ book offers a more personal look into what it was like back home during the war. Of course, this includes other soldiers that Flo met who would never come home. It includes the family mourning the loss of Joe Traywick, Bo’s brother who fought in Belgium and France. And it includes lighter looks at 1940s life and culture.

For Virginians, the book provides peeks into life in the Commonwealth during the time period, too. Flo Neher’s hometown was Lynchburg, Virginia, with references to sites in Lynchburg as well as from other locations Flo visited.

The Last Romantic War combines two principal elements – romance and war – into an easy-to-read story of two admirable people who lived through it all.