A Review of The Organ Thieves: Shocking Story of the First Heart Transplant in the Segregated South by Chip Jones. Reviewed by Annie Tobey 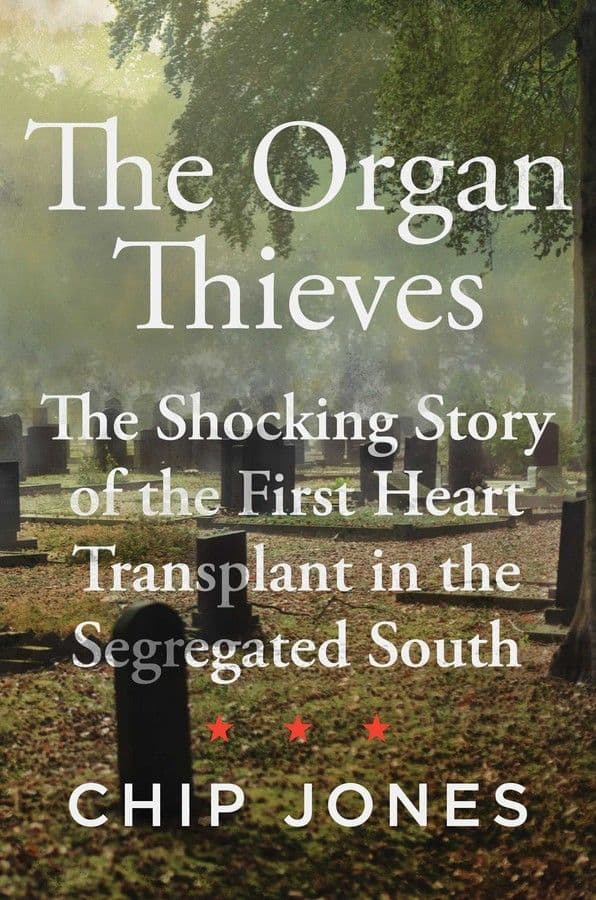 Like an epic novel, author Chip Jones’ book, The Organ Thieves carries the reader across many centuries. To tell the book’s primary plot line, The Shocking Story of the First Heart Transplant in the Segregated South, Jones takes the reader back to 1830s Richmond and the founding of the city’s medical school. The shift in time seems unexpected, since the title seems to focus on a 1960s event. But the disturbing narrative of local grave robbers quickly reminds a reader: context matters.

Context matters in understanding history – indeed, in understanding a single event, such as the 1968 heart transplant at MCV, only the ninth in the nation. And Jones provides plenty of context, across time, events, and geography. The author’s attention to detail seems unexpected at first, too, such as the years of background on Dr. Richard Lower, the man who is credited with the MCV transplant. Yet the unexpected details serve to paint a more complete picture of the characters involved in the story.

Such information also serves to hold a reader’s attention. The book is fact-based, well-researched, with primary as well as secondary sources. In telling of the MCV heart transplant, it looks at the study and experimentation that led up to human-to-human organ transplants, including the use of animal-to-human transplants. It tells of a South African visitor to MCV, Dr. Christiaan Barnard. It illuminates the contest among physicians to be the first to transfer one human being’s heart into another.

Jones brings to life main characters from across the centuries, including the physicians involved in the heart transplant; Bruce Tucker, the heart “donor,” and his brother, William Tucker; and a young Richmond lawyer, L. Douglas Wilder. By personalizing the actors, Jones personalizes the issues.

The Thread Running Through ‘The Organ Thieves’

Although the subtitle highlights the main storyline of the book, the title illuminates the theme. The theft of organs began in the 1830s, as researchers with the new medical school in Virginia’s capital city sought out human remains for anatomical study. These would come from “the peculiarity of our institutions,” wrote Augustus Warner in promoting Richmond as a suitable location for a medical school. That peculiar institution, slavery, offered “a steady supply of fresh corpses.” The supply was aided by the large slave market at the base of Shockoe Hill and the onerous tasks given to slaves. And corpses were acquired primarily by the organ thieves, robbing graves in the dead of night – primarily from the graves of African Americans and some impoverished whites.

Fast forward to the story of the first transplant. After chapters that explore the early growth of organ transplantation, including in Richmond, the tale shifts to a local Black man. Bruce Tucker was enjoying conversation and wine with friends on a Friday afternoon, after the workweek, behind the Esso station on Church Hill. After Tucker fell backwards off his perch on a brick wall, he was rushed to MCV, where he never regained consciousness.

Tensions mount, and questions seem to gather like drips through a transfusion tube. Can Bruce Tucker be brought back to consciousness? Will his family be notified? How committed is the hospital staff or police to finding Tucker’s family? Does it matter to them that he comes from a “rough neighborhood”? How does his race factor in to their decision to declare him dead, while his heart is still beating strongly but an EEG “found no clinical evidence of viability”? William Tucker hears of his brother’s hospitalization through the grapevine – why do the gatekeepers at MCV never allow him to see his brother, or, assumedly, never tell the doctors that someone is looking for Bruce Tucker?

Within 24 hours of his fall, Bruce Tucker’s heart is transplanted into a white man.

The story plays out, leaving in its wake concerns that only a Vulcan – or perhaps a self-professed racist – would not be disturbed by. The case comes to trial, with Douglas Wilder representing William Tucker’s lawsuit against MCV physicians. Jones details the trial, the arguments, and the witnesses – including the many respected physicians who were strategically in town for a conference on transplantation.

During a time when Richmonders are confronting the issues of our racist past in the form of controversial monuments, this tale and the places where it happened hold special relevance. Significant to this story, history was made at the Egyptian Building and the 1941 MCV hospital building. History was uncovered in construction of the VCU Medical Science Building in 1994, when workmen discovered an old well filled with human remains – but the archaeological recovery of these remains was halted in the name of university expansion. History was made in places torn down that we may never have heard of, like St. Philip, the segregated hospital for Blacks.

Read a perspective on the black community during the 1960s in Richmond, Virginia, from Rev. Ben Campbell, Episcopal priest, pastoral associate at St. Paul’s Episcopal Church and author of Richmond’s Unhealed History.

Although it seems clear where the author would stand on the issues of racial injustice, he doesn’t preach. His editorializing is understated and set in context. For example, he quotes medical historian Susan E. Lederer: “‘In the case of Bruce Tucker,’ Lederer writes, ‘physician concern about his recovery was colored by his race, socio-economic class, and alcohol use.’” And although Jones doesn’t hesitate to blame MCV and VCU administrators over the years for their failures in this long saga, he also notes other institutions, both North and South, where racial treatment was unjust.

After digging into this disturbing story and looking to add details to Bruce Tucker’s life, author Chip Jones tried to reach out to Abraham Tucker, who was a 14-year-old high school freshman when his father, Bruce, died. Abraham was 14 when all support from his father was ended, and even the lawsuit did nothing to provide compensation.

In explaining his wish to speak to him, Jones wrote, “I hope to provide a measure of justice where none was provided before.” Jones’ attempts to connect were fruitless. Even after the two finally made face-to-face contact, Abraham Tucker did not want to talk. But Jones understood. He wrote:

It’s been more than forty-six years since he’s been called as a witness in the Richmond trial. Now the tables are turned. He’s the judge, I’m the witness. But my testimony has been weak.

The power of The Organ Thieves is its ability to illuminate injustices across the centuries. The book may leave a reader feeling weak in pondering past wrongs, but it can also strengthen our willingness to work for justice.

The Organ Thieves: The Shocking Story of the First Heart Transplant in the Segregated South, by Chip Jones

Like books? Sign up for our monthly Boomer Books e-newsletter or other e-newsletters tailored for baby boomers!

Or browse our other boomer-focused book reviews.