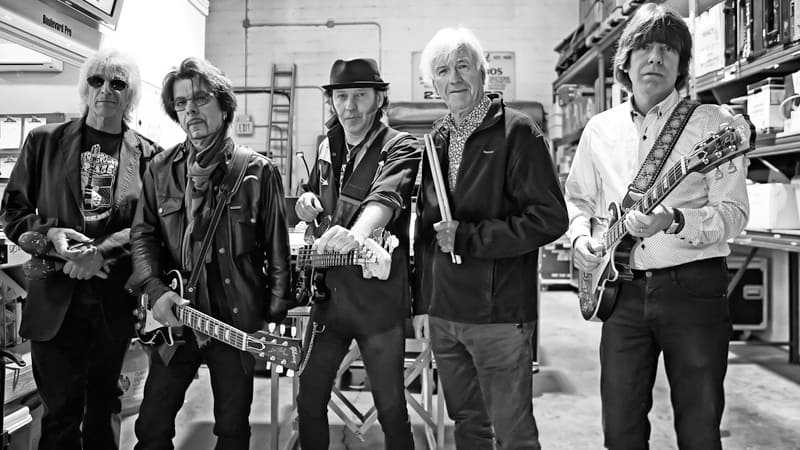 August 2019 marks the 50th anniversary of one of the most important events in rock history: the Woodstock concert. This coming January marks another important anniversary: the release of the eponymous debut of Led Zeppelin.

The Led Zeppelin story has been chronicled thoroughly in many books about the group and its various members. Hammer of the Gods by Stephen Davis may be the definitive text on the group as well as one of the most notorious rock group biographies in the no-holds-barred exposé of the excesses of the group and its time.

Several newly or soon-to-be released projects commemorate the Led Zeppelin anniversary. Some look back not only on the group’s history but on its storied origins. While rabid followers of the history of British rock know the backstory of Led Zeppelin’s birth, many don’t know that the careers of other groups and artists resulted from the tangled Zeppelin tale.

The band made up of Jimmy Page, Robert Plant, John Paul Jones and John Bonham first performed together in September 1968, before they took the name Led Zeppelin. The musicians came together in part as a result of the ever-changing lineup of the Yardbirds, a group that was a key to the British blues and R&B boom in the early ’60s. Jimmy Page had been in the Yardbirds – succeeding Jeff Beck, who succeeded Eric Clapton.

The Yardbirds’ career started off relatively inauspiciously in the early ’60s, first, as the Metropolitan Blues Quartet, formed by singer and harmonic player Keith Relf and bassist Paul Samwell-Smith in suburban London. They were eventually joined by rhythm guitarist Chris Dreja and drummer Jim McCarty. The group’s first lead guitarist was Top Topham. This lineup also provided a sometime-backing band for legendary British blues artist Cyril Davies. Davies, along with John Mayall, Alexis Korner and Graham Bond, was one of the key figures in the ’60s British blues boom that launched the career of scores of British rock artists and groups.

After using the name Blues Sounds, the members renamed themselves the Yardbirds, borrowing the nickname of jazz legend Charlie Parker as well as the slang word for hobos.

Later, in 1963, the group began playing at the famed British jazz and blues venue the Craw Daddy club. Rather than covering early American rock ’n’ roll, the group played the music of American electric blues artists. They would subsequently take over from the Rolling Stones as the club’s resident act. Not too long after that, Topham left the group because of the band’s heavy commitments, due to the management of Giorgio Gomelsky. Gomelsky ran the Craw Daddy club and became the group’s manager. Topham was replaced by Eric Clapton.

Clapton was a Kingston Art School blues purist who was alternately busking and playing with various groups and artists before his career breakthrough with the Yardbirds. Clapton was in his element with the group, particularly when the group backed American blues artist Sonny Boy Williamson. Although they backed Williamson in 1963, it would take until 1965 before an album of those performances was officially released.

Clapton played with the group throughout 1964. In early 1965, the group scored its first bona-fide hit after many singles that barely dented the charts. The song was “For Your Love.” It was not a blues cover or a song written by any of the members of the group. It was written by hit songwriter Graham Gouldman, who would eventually form 10CC. The song moved the group’s style closer to pop, which was not to Clapton’s liking. As the song rapidly moved up the charts, Clapton quit. His departure was not acrimonious, and he in fact suggested the group replace him with Jimmy Page. Page was one of the hottest session guitarists in England. His versatile guitar playing can be heard on tracks from The Who, The Kinks, Marianne Faithful, Petula Clark, Them, Donovan, Joe Cocker and many others in the mid-to-late ’60s.

Page was content with his lucrative session work and turned the Yardbirds down, but not before he recommended Jeff Beck as Clapton’s replacement. Beck was yet another hot young guitarist. Unlike Page, he was not interested in anonymous session work or simply carrying the torch for electric blues. Beck was a fearless innovator who was stretching mid-’60s rock guitar with a variety of tricks, effects and pure talent. All these years later, most guitar scholars regard him as the greatest living player, arguably eclipsed only by the late Jimi Hendrix and the late Duane Allman.

Beck slid effortlessly into the Yardbirds’ guitar chair and added a kaleidoscope of sounds and flash that brashly signaled the Yardbirds’ full pop flowering. Subsequent singles released during Beck’s tenure, such as “Heart Full of Soul,” “Shape of Things to Come” and “Over Under Sideways Down,” quickly climbed the charts and put the group squarely in the red-hot center of Swinging London’s world pop dominance. Other tracks, while not reaching the height of the charts, reflected a rich tapestry of sounds, including psychedelic and Eastern influences and what many would consider the faint early stirrings of heavy metal before it became bombastic in the ’70s.

Yet another lineup change occurred around this time when bassist Paul Samwell-Smith left the group to go into record production, eventually producing, among others, Carly Simon, Cat Stevens and Jethro Tull. Smith had become the group’s de-facto producer but had grown weary of the grind of touring. His departure opened the door for Page to finally join the group. Page had recently recorded “Beck’s Bolero” with Keith Moon, bassist John Paul-Jones, Nicky Hopkins and Jeff Beck. Page became the group’s bass player, and for a short time both Beck and Page were in the group. They can both be heard on “Happenings Ten Years Time Ago” and the flipside, “Psycho Daisies.” The two also appeared together in Michelangelo Antonioni’s defining Swinging London ’60s film Blow-Up, released in 1966. The group is seen performing “Stroll On,” a slightly altered version of “Train Kept A-Rolling,” a jump blues cover that had been in the Yardbirds’ set for years, using the band’s signature “rave-up” style, a frenetic extended jams of songs.

Beck, too, eventually tired of the ceaseless touring and left the group. Dreja moved to bass, and Page became the group’s lead guitarist. Oddly enough, that would be the beginning of what would be a period of decline for the group as hitmakers while its sound became even more psychedelic and experimental, with less of a pop approach.

The Yardbirds would eventually morph into various groups, with Beck going off to form the Jeff Beck Group with Rod Stewart and Ron Wood. Relf and McCarty would form an acoustic duo, Together, and then form the original Renaissance. Relf would be part of many new groups through the ’70s, before dying at age 33 of an electric shock from a microphone. Music fans would come to know Renaissance as the classical-inspired group led by vocalist Annie Haslam.

Although he later became a rock photographer, Dreja flirted with the idea of forming various groups with Page, with a host of artists asked, considered or discussed. Artists who had played with the Yardbirds in the studio or who were with other groups such as Procol Harum were contenders. Terry Reid, who maintains a thriving career to this day, was asked to join but instead recommended singer Robert Plant, who in turn suggested drummer John Bonham. John Paul-Jones, like Page a hot session musician who had played on previous Yardbirds recordings, asked to join upon hearing about the new group. Dreja would be part of Led Zeppelin’s eponymous debut by taking the back-cover photograph of the group. The Led Zeppelin lineup of Page, Plant, Jones and Bonham actually played a few shows under such monikers as the Yardbirds and the New Yardbirds before settling on Led Zeppelin.

SCRATCHING BENEATH THE SURFACE

Steve Matteo is the author of Let It Be and Dylan. The Beatles in Context will be published by Cambridge University Press in 2019. He has written for The New York Times, the Los Angeles Times, New York magazine, Rolling Stone, Elle and Salon.