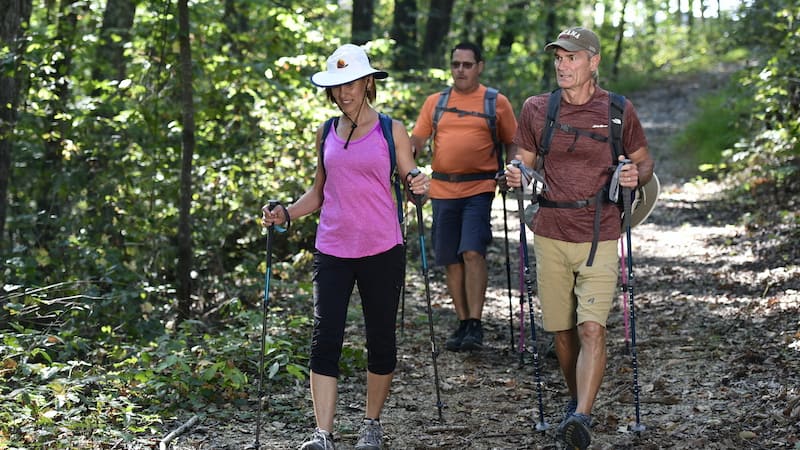 Community members engaged in trail building at Tellico Village demonstrate how a big endeavor can be accomplished with perseverance and a united spirit – and that age has no bounds.

Crisp mountain air abounds as swirls of falling leaves touch the ground and crunch under foot with each step. Through the tree-lined forest, a backdrop of rolling mountains set in shades of yellow, orange, red and brown provides a vibrant sight that matches the shades of the setting sun. It’s fall; and in the shadow of the Smoky Mountains reflected within the cool, serene waters of Tellico Lake lies an escape from the harried outside world, COVID-19 gloom and bleak news headlines: nearly 30 miles of meandering walking and hiking trails ripe for those seeking a little active wanderlust and taste of the great outdoors.

Located within Tellico Village, a cozy community of about 9000 residents nestled in the foothills just 45 minutes southwest of Knoxville, the trails beckon autumn leaf-lookers while the moderate climate provides a year-round activity. But don’t be mistaken. These trails have a story – a story that tells of perseverance and how when community members join together, they can accomplish most anything.

The backstory of trail building at Tellico Village

The story behind the trails and their eventual impact begins with Simon Bradbury. When he arrived in Tellico Village as the community’s recreation director four years ago, he had previously tried unsuccessfully to launch a trail-building project at his previous job but was thwarted by lack of space. Upon landing at Tellico Village, he discovered that land here would not be an issue. Stretching over 4,800 acres, forests and open land comprise 1,600 of those acres, which is common property owned by the property owners’ association. However, while land availability for trails was not Bradbury’s problem, finding the manpower to construct those trails was, especially for someone new to the community.

In reflecting on that moment, Bradbury said, “I had hoped I would find the right people. I knew the community’s reputation as a welcoming, friendly place, and it seemed like everyone was involved in something: sports, social organizations, church activities, and different types of community service. Volunteering was part of the community’s DNA. Plus, I also learned the Villagers had been wanting more trails for years.”

It was soon after the inspiration for his trail-building vision that he discovered Tellico Village resident Gary Mulliner. A former history teacher who retired to the area after running a successful second career in trade show design, Mulliner is an avid outdoorsman, and Bradbury discovered that, although not a hiking enthusiast, Mulliner loves being outside and expressed an interest in building trails as a way to enjoy the forests and wide-open spaces.

After some stops and starts, Mulliner mastered the art of trail building and improved his skill and speed with each new, finished mile of trail. Gradually, other Tellico Village residents took notice and joined the trail project. The crew affectionately named Mulliner “The Warden.” Maybe he earned the title because he always seemed to be giving direction or possibly because he was the oldest of the crew. Mulliner is now 79 years old.

Making inroads in relationships and skills 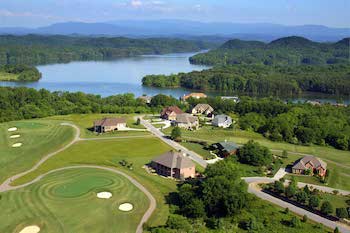 As progress was made on the trails, a partnership formed between Bradbury and Mulliner and they found they were kindred spirits. The two attended a master trail-building school offered through the Tennessee State Park system and took part in a professional trail-building conference. They learned how to build sustainable trails to professional standards using construction methods that decrease the long-term maintenance requirements.

During the start of the pandemic, seven to eight crew members, known as the Trail Builders, usually showed up to work a trail-building session and, during normal times, would commit to work once a week. Over the past year, due to lockdowns and limited access to other activities, the crew worked two, three or sometimes even four shifts a week. This led to a productive period with four new miles of trails built throughout the Village.

Other Trail Builders members joined after being inspired by the effort. Don Theis, a 74-year-old resident of Tellico Village for 15 years and a former financial advisor from Wisconsin said, “My involvement has been a great late-life experience. I marveled at the guys’ work ethic, energy and commitment.”

Some of Theis’ most satisfying moments came when delivering bridge parts or a staircase to a site, and hiking Villagers would applaud the efforts. “It gives you a real sense of accomplishment when your neighbors genuinely express appreciation for your work,” said Theis.

For Kevin Georgia, 65, who came to Tellico Village from Oklahoma, seeing people enjoy the trail provides the most satisfaction. “All of us love being in the woods, and I get real pleasure in seeing so many Villagers now using the trails,” said Georgia. “Over the past few months, we have been out on the trails a lot adding to the system. We’ve seen so many more people than we usually do, which is terrific.”

The Trail Builders put their heart into the trails, and it shows with the attention to detail and additions. At each trailhead is a sign designating the trail name. Hikers are guided along pathways by white paint blazes on trees every few yards to delineate the direction of the trail. Staying on course is not a problem, thanks to the trail crew installing signage and hauling buckets of paint to create the valued markers.

The crew also elevated trail naming to an art form. Central to the Trail Blazer’s success: instantaneous observational skills. There are 37 named trails in the Tellico Village system and most carry spur-of-the-moment identifications. It does not take much imagination to understand what a trail builder saw on Red Hawk Trail, what another encountered on Box Turtle Trace or where Firehouse Carry leads.

Beyond the names, another feature of the trail system is pocket parks: quarter-acre areas that were cleared where benches and picnic tables are built and positioned. Most parks are in the woods or along the lake shore. The same process of off-site construction and hauling the materials to the five pocket parks sites is employed as it was for the bridges and staircases.

Enjoying the Upper Cumberland in Tennessee

In addition to the picnic tables, they erected a series of kiosks. The sign boards showcase information on the birds, wildlife and flowers common to the areas as well as a map of the entire trail system. Mulliner and local experts conducted the research and developed the material including photos and text that fill the kiosks. There is also a sign board dedicated to all the Villagers who have constructed trails around the Village.

This accolade is welcome since trail building comes with hazards. Bug bites, sore backs, achy muscles and humid weather are common. And the most consistent threat: poison ivy. The crew often jokes that the broad scale of poison ivy could be harvested as a cash crop. Fortunately for hikers, the Trail Builders do a thorough job of eradicating the irritating plant when constructing the trails. Still, Mulliner comments, “I find exchanging poison ivy treatments to be a great team-building exercise.”

Trail-building at Tellico Village provided assets for all

The entire system presently covers 28.3 miles with 20.3 of those miles being built since 2017. The volunteers have never tried to estimate their hours of labor on the trails, but the cost can be quantified. If the system had been built by a trail-building firm, it would have cost over $530,000. Yet the work of the Tellico Village volunteers enabled the recreation department to only provide funding for lumber, paint and tools, which chiseled the cost down to a mere $8,034.

The trails have proved an asset – and not just for the enjoyment of hiking alone. The pandemic, which saw an ebb then another escalation, causes feelings of isolation, stress and anxiety. As people forgo crowded venues and large group events, it creates a sense of loss and sometimes hopelessness. COVID-related grief is not uncommon. In fact, the CDC reported over 40 percent of people have experienced a form of depression during COVID. This is even more likely to impact senior citizens who are in a higher risk category.

A study published by the U.S. National Library of Medicine National Institutes of Health, “Impact of Social Isolation Due to COVID-19 on Health in Older People: Mental and Physical Effects and Recommendations,” found that mental health and lack of physical activity in seniors are negatively affected during social distancing and that safe opportunities for connection and physical activity are recommended.

Thus, the trail system has been a haven during a difficult time – providing an enjoyable escape where Villagers can socially distance while enjoying fresh air, views and getting some much-needed exercise and a welcome distraction from COVID.

Tellico Village resident Jim Wilhelm and his two dogs, Lilly and Cooper, are fixtures on the trails. “These trails probably saved my marriage during the pandemic,” he says with a slight smile. “At different times, when I felt my wife needed a little space, I’d hurry the dogs into the car, go to a trail, and we’d spend an hour or two enjoying the woods and meeting other Villagers. It was safe and fun for the dogs and me.”

Tellico Villager, Kela Campbell commented, “During these difficult times, the trails have been a life saver for my husband, Bryan, and me. We use them just about every day. It gets us outside and we can safely reconnect with friends and neighbors. The people that built this system gave us a wonderful gift.”

With the autumn season descending and trails across the country enticing hikers and walkers, the little gem in the shadow of the Smoky Mountains serves as a reminder of what a single community and handful of people with a vision can accomplish. As Mother Teresa once said, “I can do things you cannot, you can do things I cannot; together we can do great things.”

Joe Bogardus is a retiree, an avid hiker, pickleball player and yoga practitioner. During the pandemic, Joe’s walked more than 1,000 miles of Tellico Village streets and trails. He’s been a resident of the Village since 2007, moving with his wife from Chicago. Professionally, he was involved in brand management, advertising and public relations for two legacy brands and several communications agencies. During his high school and college years, he was a sports reporter for a Gannett Group newspaper.