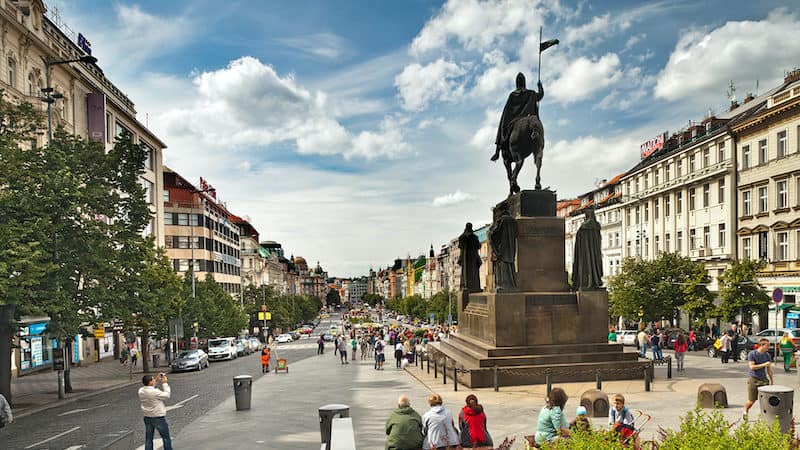 As we’ve had to postpone our travels because of the pandemic, I believe a weekly dose of travel dreaming can be good medicine. Here’s one of my favorite European destinations – a reminder of the fun that awaits us at the other end of this crisis.

It seems whenever my Czech friends take me around Prague, the capital of the Czech Republic, we see the sights and then invariably end up in a pub, where my lessons on the country continue over a few mugs of their beloved pilsner.

Pivo (beer) is a frothy hit with tourists, too. After all, the Czechs invented pilsner-style lager in nearby Plzen, and the result, Pilsner Urquell, is on tap in many pubs. In Czech restaurants, a beer hits your table like a glass of water does in the U.S. I’ve learned to be careful – it’s stronger than the beer back home. Pivo for lunch has me sightseeing for the rest of the day on what I call “Czech knees.”

Honza – a young yet professorial guide I’ve known for years – teaches more emphatically after a couple of beers. I’ll never forget how he slammed his glass mug down on a sticky beer-hall table to announce “Czechs are the world’s most enthusiastic beer drinkers – adults drink an average of 150 liters a year! We couldn’t imagine living without this beer … the Czech pilsner.”

The joy of having a good time in Prague seems heightened by my physical surroundings and by the heaviness of the country’s recent history. Prague is “the golden city of a hundred spires.” Because this vibrant Baroque capital escaped the bombs of the last century’s wars, it’s remarkably well-preserved. But it didn’t avoid the heavy, deadening economic and political blanket of communism.

It’s hard for today’s visitors to imagine the gray and bleak Prague of the communist era. Before 1989, the city was a wistful jumble of lost opportunities. Sooty, crusty buildings shadowed cobbled lanes. Thick, dark timbers bridging narrow streets kept decrepit buildings from crumbling. Consumer goods were plain and uniform, stacked like bricks on thin shelves in shops where customers waited in line for a beat-up cabbage, tin of ham, or bottle of ersatz Coke. The Charles Bridge was as sooty as its statues, with a few shady characters trying to change money. Hotels had two-tiered pricing: one for people of the Warsaw Pact nations and another for capitalists. This made the run-down, Soviet-style hotels as expensive for most tourists as fine hotels in Western Europe. At the train station, frightened but desperate characters would meet arriving foreigners to rent them a room in their flat. They were scrambling to get enough hard Western cash to buy batteries or Levi’s at one of the hard-currency stores.

Today, that’s all ancient history. The people of Prague are as free and capitalistic as any other citizens of the European Union. They wear their Levi’s oblivious to how they were once the pants of dreams. The city is fun – slinky with sumptuous Art Nouveau facades, offering tons of cheap Mozart and Vivaldi concerts, and still brewing some of the best beer in Europe.

With every visit, to get oriented, I head for the vast Old Town Square. It’s ringed with colorful pastel buildings and dotted with Baroque towers, steeples, and statues. Street performers provide a jaunty soundtrack. Segways dodge horse-drawn carriages crisscrossing the square.

I continue a few blocks past the Old Town Square to the centerpiece of modern Prague: Wenceslas Square (see photo above, credit Dominic Arizona Bonuccelli). Looking around, I realize that the most dramatic moments in modern Czech history played out on this stage. The Czechoslovak state was proclaimed here in 1918. In 1969, this is where Jan Palach set himself on fire to protest the puppet Soviet government. And it was here that massive demonstrations led to the overthrow of the communist government in 1989. Czechs filled the square night after night, 100,000 strong, calling for independence. One night, their message was finally heard, and the next morning, they woke up a free nation.

There’s lots more to see. And every evening, even after a full day of sightseeing, Prague offers tempting reasons to be out and about. My Czech friends and I always finish our evening with another mug of that local beer. While I haven’t picked up many Czech words, “Na zdravi!” (“To your health!”) is a must. I always remember it by saying, “Nice driving!” My pronunciation isn’t perfect, but that’s OK. After raising their mugs a few too many times, I’ve heard fun-loving Czechs bellowing “Nadrazi!” (which means “Train station!”). Good to know that tipsy Czechs stumble on their words, too.