Political Humor on Both Side of the Aisle

I remember when Halloween was the scariest night of the year. In 2016, it’s election night.

Many U.S. citizens have reservations about both major party candidates this year. On Nov. 9, many will wake up with a political hangover, like Las Vegas newlyweds who met over the roulette wheel and martinis the evening before. Since humor serves as a natural stress release, perhaps an examination of political comedy can lift our spirits. Nonpartisan jokes present the safest and easiest laughs: “Politicians and diapers have one thing in common. Both should be changed regularly, and for the same reason.” Or “I don’t believe in political jokes – I’ve seen too many of them get elected.”

Most political jokes, however, target a particular politician or one side of the aisle. How funny each quip ranks may depend upon your point of view. Although Nov. 9 will see a Republican or Democrat winner (excepting the possibility of hanging chads or third-party surprises), have you ever considered which party would win a comedy contest?

In The Humor Code, researcher Peter McGraw and writer Joel Warner ask which party wins the prize for being funnier. They cite research by University of Arkansas political science professor Patrick Stewart (no known relation to Jon), who analyzed the use of humor in the 2008 primary debates. Stewart didn’t find either party to be funnier, but he did see a difference in the candidates’ jokes. Democrats’ humor was more inclusive and convivial, he claimed, while Republicans relied more on what Stewart called “encrypted humor,” the “ ‘wink-wink’ in-jokes that separate insiders from outsiders,” including Mike Huckabee’s quip, “We’ve had a Congress that has spent money like [John] Edwards at a beauty shop.”

As John Cleese, British comedian of Monty Python fame, explains, “All comedy is critical. Even if you make a very inclusive joke, like ‘How would you make God laugh? Tell him your plans.’ Now that’s … saying we all have all these plans that probably won’t come true and isn’t it funny how we still believe they’re going to happen. That’s a very inclusive joke and it’s still critical.”

Much offensive humor, however, aims for a specific target, which raises a challenge for a social conservative trying to be funny. Right or wrong, Democrats say they stand up for the underdog while Republicans articulate fewer warm fuzzies for minorities.

“If the powerful pick on the less powerful, or worse, the powerless, are the jokes doomed to come off as bratty, if not just plain mean?” asked Frank Rich in New York magazine.

And while liberal comics tend to be equal-opportunity offenders, gleefully joking about Obamacare as well as Trump’s hair, socially conservative Republicans often hesitate to attack their bastions of power, as represented by Christian church leaders.

“Angry laughter” is an oxymoron. Conservative comedian Brad Stine works a stage like a lion prowling in his cage. His presentation is full-on offensive, funny for those who agree while simultaneously engendering seat-shifting discomfort. In his talk show, “Flip Side with Michael Loftus,” the host projects a similar anger against those he opposes, a meanness that can be discomfiting. Stephen Crowder of the “Louder with Crowder” podcast also favors angry rants.

These men may be more effective as commentators than comedians, but other conservatives strike a blend. In his segment on “The O’Reilly Factor,” Dennis Miller’s confident, laid-back presentation intersperses snarky political insights with efficient humor and silliness. (The show’s host, Bill O’Reilly, appears to prefer Miller’s mini-rants to his humor.)

Similarly, P.J. O’Rourke skewers objectively, more like a curmudgeonly old fart than a raging heretic. For example, his report on the Republican presidential primary debate included LOL zingers against all of the candidates.

Another conservative who blends chuckles with exhortation, Greg Gutfeld, has written a book that offers effective ways to blend humor and persuasion. In “How to Be Right: The Art of Being Persuasively Correct,” Gutfeld emphasizes patience, humor and understanding – none of which reflect a spirit of anger.

Two liberals and a conservative walk into a bar.

“I’ll have a Polite Caucasian Cis Female,” one Democrat tells the bartender.

“An Elitist, Enslaving Plantation Owner’s Drink Mixture for me,” says the other.

The conservative wears a puzzled expression on his face till the bartender places the two drinks on the bar. “One White Lady and one Planter’s Punch,” the bartender proclaims.

“And for you?” asks the bartender.

“One Not-Until-After-Marriage Between the Sheets for me,” the Republican declares.

Political correctness may rest in the eye of the beholder, but two comedic anti-PC takes, one from a liberal and one from a conservative, illustrate the power of subtlety.

British Liberal Democrat supporter John Cleese said, “If we start thinking, ‘Oh, we mustn’t criticize them,’ then humor’s gone. With humor goes a sense of proportion, and as far as I’m concerned, you’re living in ‘1984.’”

By softening his message, Cleese strengthens its impact.

Brad Stine, on the other hand, proclaimed, “If you’re offended by the truth, that’s your problem. I have no obligation to not offend you if I’m speaking the truth. The truth is supposed to offend you. That’s how you know you don’t got it.”

Whether celebrating or mourning the results this November, you may find yourself agreeing with classic American humorist Mark Twain: “The political and commercial morals of the United States are not merely food for laughter, they are an entire banquet.”

Jumble for Kids and Adults: Cats and Coal 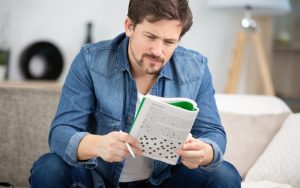