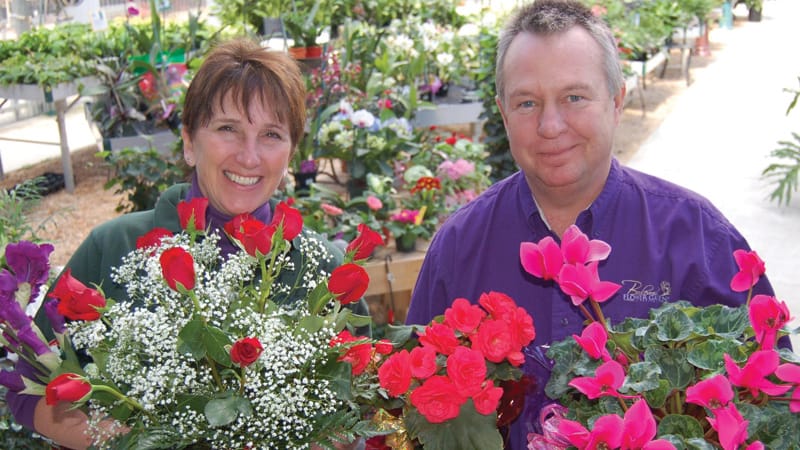 Boulevard Flower Gardens, a full-service garden center and greenhouse located in Colonial Heights, began in the home of Maybelle and George Landa in 1955. In the 1980s, the Landas relocated the growing business, and their son, Mark, and his wife, Francine, took over. In 2017, 63 years after Boulevard Flower Gardens began, Mark and Francine’s daughters joined the family business. In truth, Casey Landa and her sister, Madison Williams, always worked in the Gardens, but in 2017 they officially became co-owners with their parents.

The Landa family work ethic was apparent as Casey shared the story of Boulevard Flower Gardens while watering the plants on a sweltering June afternoon. With the temperature at 102 degrees, she and her dad were the only ones left at the Gardens that day, and Casey was multitasking – trying to keep the heat from damaging the flowers. They are nearing the end of a building project and temporarily operating out of their production facility, which also includes 13 greenhouses. At the end of the workday, Casey and Madison were headed over to the new building to finish the new floors themselves, to save money and expedite the project.

After six decades in business the Gardens have seen changes, expansions and reductions, but one thing has never changed: the family is committed to serving the needs of their cherished Colonial Heights community. In 2007 they expanded to a 33,000-square-foot facility, opened a café and diversified their offerings, but over time realized that they had grown bigger than they wanted and decided to scale back, build a new space and get back to their roots, so to speak. The new building is scheduled to open in August or early September.

Casey studied horticulture in college, and Madison received a degree in international relations. When asked whether they had to be persuaded to join the family business, Casey responded, “My sister and I couldn’t imagine ourselves doing anything else. Family has always been first for us.” She said that it has been a process of discovery since they assumed their new roles to determine who would do what, but they have very specific skill sets – the “yin and yang of the family business.” Madison is more introverted and detail oriented, so she handles the books, the website and the business side of things; Casey is more outgoing, taking on the social media, marketing and retail aspects. Casey shares the passion and expertise of the planting and tending with her dad.

Mark and Francine Landa know and respect their daughters’ strengths and interests and, while Casey reports they have the occasional disagreement, the transition has been pretty seamless. She says they have found a positive intersection where the parents’ experience and knowledge meet the daughters’ youth and creativity, which she says feels really special to them all. “We are really fortunate to still be here,” Casey says. “It hits close to home when customers say they feel they are among family when they come here.”

Erin Mahone is a wife, mother of three and the author of the soon-to-be-released book #IfYouCouldSeeMe: Life, Motherhood, and the Pursuit of Sanity. IfYouCouldSeeMe.com