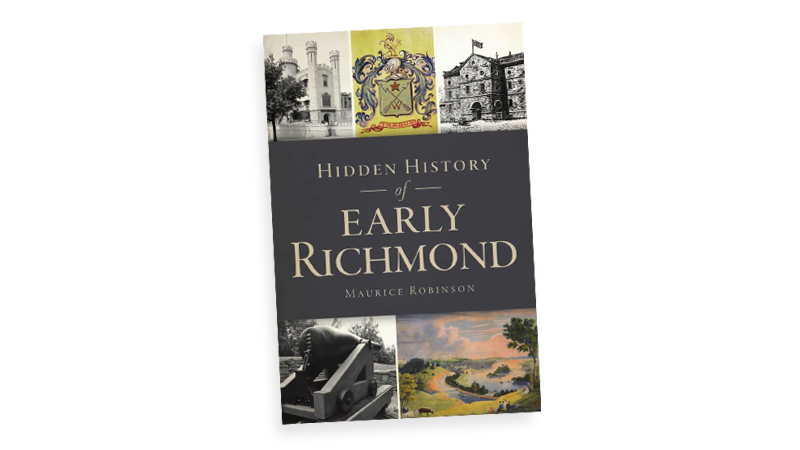 In tales of fantasy or science fiction, ideas of a parallel universe intrigue readers and take them on an imaginative journey of the mind. Learning historical accounts of familiar places can have a similar effect. In reading Hidden History of Early Richmond, I came away with that feeling. It’s as if places that I have passed time and again have visions of the past inhabiting those very same spaces. And now I will sense that spirit as I travel familiar paths.

As a part of Arcadia Publishing’s Hidden History series, this book sheds light on stories unknown even to most locals. Whereas Hidden History of Richmond by Walter S. Griggs Jr. delves into tales from after the Civil War, Maurice Robinson’s book focuses mostly on 1607 through 1865. Robinson also turns our gaze to Powhatan and Chesterfield counties as well as Richmond.

A long-time resident of Chesterfield County, I’ve traveled down Huguenot Road many, many times, only occasionally aware of the French Huguenot religious refugees who came to Virginia. I’ve passed Trabue’s Tavern on Old Buckingham Road – turns out the Trabues owned much property in Midlothian and Powhatan County. The book’s chapter on the French Huguenots gives a broader perspective on the immigrants, including the Trabues and refugees who settled in Williamsburg and were friends with young Thomas Jefferson.

Two little-known historical venues that Robinson describes include a silkworm breeding farm at Bellona and foundries at Westham and Bellona. The silkworm farm reflected a larger national fad, which included growing the mulberry trees that the worms feasted on. The foundries were two among several local manufacturers of items such as cannons, swords, cannonballs, and bullets along with arsenals.

The Diamond: Miracle on Boulevard

One chapter of Hidden History of Early Richmond shares tales from the city’s “seven hills”: Gamble’s Hill, Union Hill, Council Chamber Hill, French Garden Hill, Navy Hill, Shockoe Hill, and Church Hill. The background provided by the book enriches appreciation for these historic neighborhoods. More importantly, it enriches appreciation for the people of these neighborhoods – including German and French immigrants, free black artisans, gangs of roaming (and not so mannerly) boys, and working-class whites.

It may be argued that the most intriguing of historic lore is well known (though oft skewed, like the game of Telephone we played as kids). It may be said that the history that is hidden, or less known, is so for a reason. After reading this book, you can dig up some fun gems to share with friends at your next party as well as a richer appreciation for the people and places that once inhabited the area. Wherever we live, much has happened before. A book like Hidden History of Early Richmond adds interest to the steps we take every day.