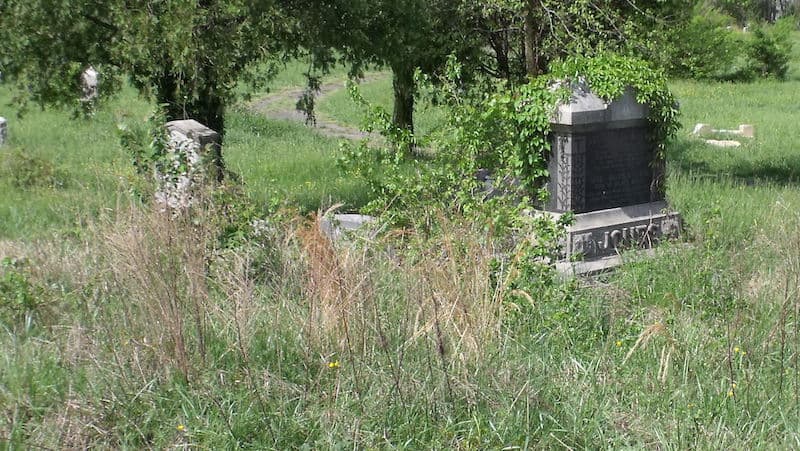 The Woodland Restoration Foundation is returning historic African American Woodland Cemetery in Richmond, Virginia, to its original beauty. The organization took over the process of restoring the sacred property more than three years ago, as a place for “families and friends to find comfort in honoring the deceased and for future generations to learn about their ancestors.”

In many ways, the story of Woodland and other African American cemeteries in Richmond reflects the history of Blacks in the city.

Respect for the dead has not always been an across-the-board concept.

Beginning in the 1830s, the Medical College of Virginia in Richmond regularly robbed graves to acquire bodies and organs for anatomical study. The bodies would come from “the peculiarity of our institutions” – i.e., slavery – which offered “a steady supply of fresh corpses.” The steady supply of post-mortem bodies was acquired primarily by grave robbers who exhumed corpses of Blacks and some impoverished whites in the dead of night. This and other practices were considered in The Organ Thieves, a 2020 book by Chip Jones.

The theft continued after the Civil War. After thieves were arrested in 1882 for stealing cadavers, “The governor promptly pardoned and released all four of those arrested in a tacit understanding of the practice,” wrote VCU history professor Ryan K. Smith in Death and Rebirth in a Southern Cemetery.

Properties that became Evergreen, East End, and Woodland cemeteries were purchased and operated by Blacks at the end of the 19th and into the early 20th century. White cemeteries – including public cemeteries – were segregated, but Black families were proud of their hallowed grounds and found rest for their loved ones.

The story of Woodland Cemetery began in 1891, when the Greenwood Memorial Association purchased 30 acres of farmland called “Hedge Plain” as a cemetery for African Americans. However, white landowners sued Greenwood, so cemetery plans were nixed. In 1917, John Mitchell Jr., the “fighting editor” of the Richmond Planet, revived the property and the plans, opening Woodland Cemetery.

“The cemetery’s radial design paid tribute to African American leaders, with circles named after Frederick Douglass and Booker T. Washington at its heart, and John Jasper Road bisecting it north and south,” reports Richmond Cemeteries, a website from author and VCU professor Ryan K. Smith. “Local contractor William R. Mason built an impressive front entrance with granite pillars and an iron gate. The company soon built a chapel and keeper’s house in the rear of the property.”

The challenges that Woodland and other African American cemeteries faced thereafter continued to reflect struggles of Black Americans. Richmond’s white residents resisted African American equality and participation in government and used Jim Crow segregation to restrict schools, jobs, and neighborhoods. In the 1910s, “the average yearly income of the poorest black families in town was $516, only two-thirds that of the poorest white families,” says Smith in Death and Rebirth, while 20 percent of blacks were illiterate, compared to one percent of whites. Arrest rates were three times higher among African Americans; incarceration was similarly higher; and Black lifespans were about 12 years shorter. “The daily indignities of racist language, expectations of defential behavior, and segregated accommodations made life under these conditions that much more difficult.” 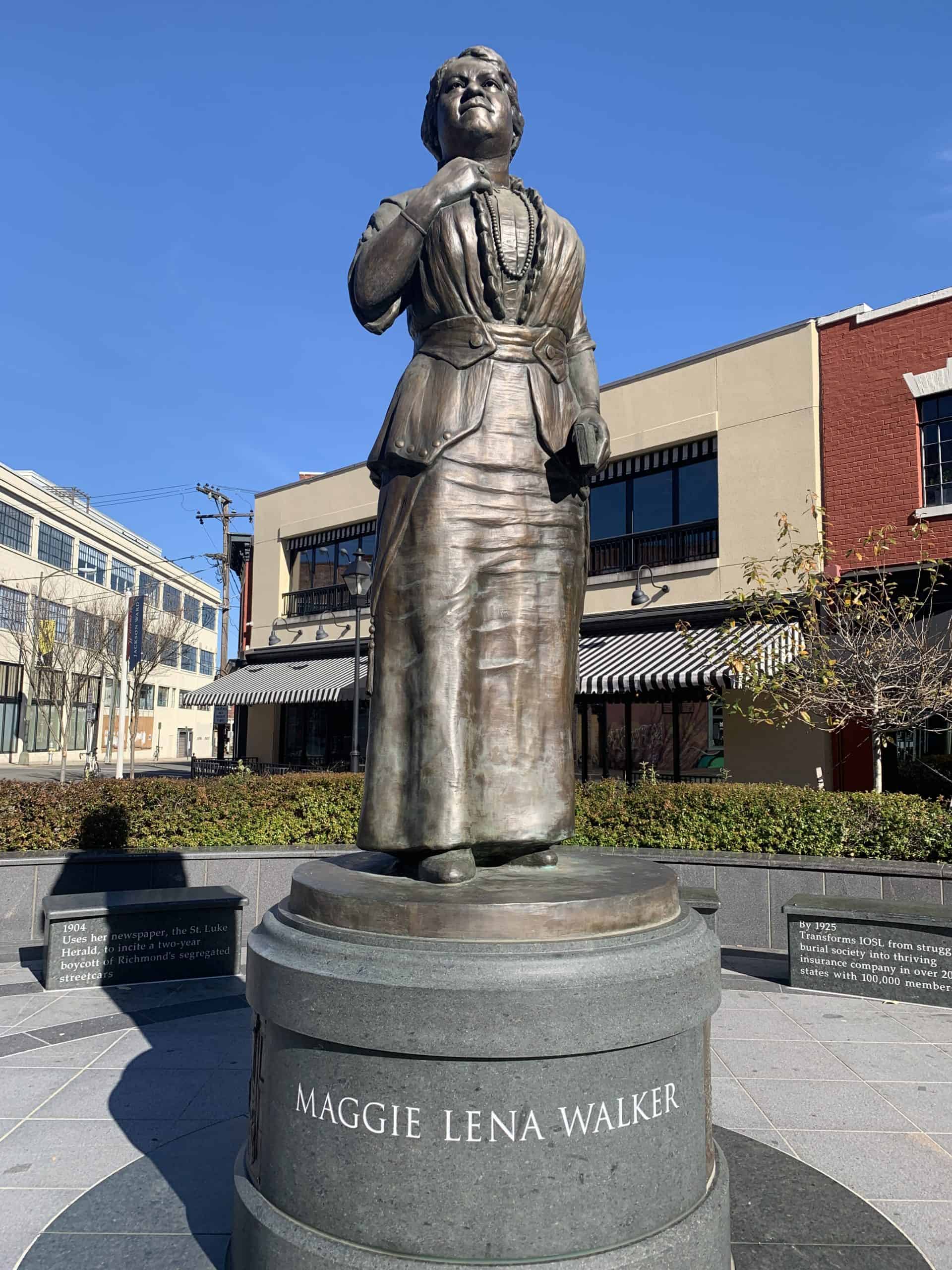 Six months before her death, Maggie L. Walker participated in a “Buy Where You Can Work” parade in Richmond, joining a thousand other marchers one evening in June 1934. The campaign had begun in Chicago in 1929, boycotting stores that refused to hire African Americans. Also known as “Don’t Buy Where You Can’t Work,” the movement spread across the U.S., where Black unemployment rates were often double or triple the national average.

Walker was buried with high honors from both the Black and the White communities in December 1934 in Evergreen Cemetery. Other notable Black leaders buried in Evergreen include John Mitchell Jr., funeral director A.D. Price, and Sarah Garland Jones, who was the first Black and first woman certified to practice medicine by the Virginia State Board of Medicine.

Given the challenges they were up against, patrons of Richmond’s Black cemeteries “could afford funerals, plots, and grave markers only by pooling resources through fraternal organizations or insurance companies, leaving little long-term care funds for future maintenance,” says Smith. “One generation following Walker’s heralded funeral, the cemetery started to become overgrown, to slowly slip into a state of near total disarray amid an untamed forest.”

As intentional signs of disrespect, trespassers dumped piles of trash and vandals destroyed graves, mutilated bodies, and removed grave markers. Overgrowth began creeping into the properties by the 1950s, engulfing them by the ’70s. Families of plot owners had died out or moved away. White leaders had taken over care of White cemeteries that faced financial challenges, utilizing government support and fundraising among wealthy Whites. But African American communities lacked those resources, and cemetery management crumbled.

When Richmond native and tennis great Arthur Ashe died in 1993, he was buried beside his mother at Woodland Cemetery, per his request. In advance of the visiting dignitaries and mourners who would attend the Ashe funeral, the City of Richmond and Commonwealth of Virginia sent maintenance workers to clean up the cemetery. Merely ten weeks later, the decay had returned. In those few weeks, the road leading to the cemetery once again became a dumping ground for appliances, tires, and other trash. A city official requested to move Ashe’s coffin and his mother’s to “a more dignified setting.” Never mind the others who were buried there.

Volunteers began renewal of Evergreen Cemetery in the 1970s and 1980s and have continued and expanded to other Black cemeteries. Volunteers have come from diverse backgrounds, both Whites and Blacks. Efforts have ramped up recently with growing recognition of racial inequities.

After beginning work on Woodland Cemetery more than three years ago, the Woodland Restoration Foundation reports, “We are well into the process of restoring it to the sacred, beautiful space it was intended to be.”

Volunteers and caretakers work weekly to remove overgrowth, clear trash, mow grass, and unearth grave markers. Restoration has begun on the chapel and office facilities, including a fresh coat of paint and a new roof.

Marvin Harris, executive director of the foundation, appeals to the community for additional assistance. “Although our group is dedicated and strong, we cannot do it alone. We need community and family support, and we are asking for help in two ways: We request that family members of those interred at Woodland commit to contributing what they can afford for the perpetual care of gravesites.”

Second, Harris adds, “Our goal is to create a museum to house artifacts from Woodland that can be displayed for visitors to the grounds. If you or someone you know has photographs or artifacts that you would be able to lend or donate for use in the museum, please contact us.” Harris can be reached at 804-240-1418 or by email at mharris@mapinv.com.

Visitors have found comfort at Richmond’s Black cemeteries. “There they could see memorials to fearless community leaders only a generation or two beyond slavery, and they could find tangible evidence of mutual support,” says Smith. “[The cemeteries] were distinctive in their occasional, African-infused folk touches, in the separate fraternal traditions, and in the guidance of black funeral directors.”

“Woodland is a Richmond landmark and treasure,” says Harris. “Together, we can complete the process of restoring it to its intended glory, and we can guarantee that it will continue to be a beautiful space for generations to come.”

With a recognition that all Americans deserve the promises that the United States of America was founded upon, perhaps the restoration of Woodland Cemetery can reflect a new spirit in our nation.