‘Down Along with that Devil’s Bones’ 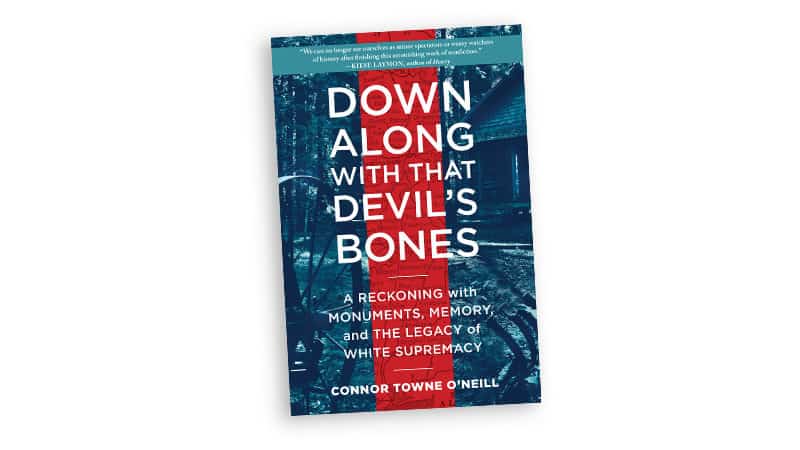 The “tip of the iceberg” makes an appropriate yet innocuous analogy for issues around Confederate monuments. These tributes to the American South of the Civil War cover deep disturbances, unlike the crystalline beauty of an iceberg. In Down Along with that Devil’s Bones, Connor Towne O’Neill examines monuments to one Confederate leader to give readers a chilling view of the issues.

The book focuses on statues of Nathan Bedford Forrest in four Southern cities – Selma in Alabama and Murfreesboro, Nashville, and Memphis in Tennessee. As with other Confederate monuments around the U.S., these statues have seen conflict over whether they should be removed or allowed to remain. O’Neill examines Forrest, the statues, the controversies, and the people involved. He uses first-person voice to weave a narrative that blends history, perspective, and editorializing.

In the book, O’Neill unmasks the life and military experiences of this darling of Lost Cause proponents as well as the troubling aspects of his life.

Before the war, Forrest was a successful slave trader.

Soon after the war began, in 1862, the 41-year-old raised his own cavalry troop for the Confederate cause, proclaiming himself as a leader with “reckless bravery controlled by a fund of sound and logical sense,” seeking soldiers who wanted to “have some fun and kill some Yankees.”

During the war, Forrest proved to be a shrewd tactician and skilled cavalry leader and was quickly promoted. He was commander of the massacre at Fort Pillow, where nearly half of the Union soldiers were killed. Thirty-one percent of the men in white units and 65 percent of the US Colored Troops were killed. (By Confederate law, all the Black Union soldiers were to be considered runaway slaves. And the captors said to their white Union captives, “You’ll fight with the n—–s again, will you?”)

In one of the final battles of the Civil War, in April 1865, General Forrest lost the city of Selma, Alabama, to the Union. The loss was understandable (forgivable, to Forrest admirers) as his 4,000 troops were inadequate to stand up to the Union’s 13,000 troops.

After the war, he became the first Grand Wizard of the Ku Klux Klan.

Personalizing the issues around Confederate monuments

By using first-person narrative in Down Along with that Devil’s Bones, O’Neill carries the reader along on his personal journey, traveling to the locations of Forrest monuments and meeting with people who have skin in the game.

For example, he introduces Rev. James Perkins Jr., first black mayor of Selma. Within a week after Perkins took office, Neo-Confederates erected a Forrest statue, on city property, in a predominately Black neighborhood. The statue that was later stolen, then replaced.

“Selma is a battleground,” Perkins tells O’Neill. “April of 1865, the last significant battle of the Civil War, was fought on that ground. That makes Selma iconic … So the battle to regain Selma never stopped. This was a continuation of a battle that started way back in the 1800s. And they had the same general.”

The Organ Thieves: The Shocking Story of the First Heart Transplant in the Segregated South

In another town, O’Neill chats with William Dorris, whose land hosts a 25-foot Forrest statue, visible from I-65 near Nashville. The plastic silver-colored statue of the general, atop a gold-colored horse, was created by artist Jack Kershaw. The Southern Poverty Law Center called Kershaw “one of the most iconic American white segregationists of the 20th century.”

O’Neill ties his narrative together with an abundance of history, to present the fuller context of the controversy. This history, with details rarely taught to schoolchildren, provides valuable insights to readers seeking to understand the issues below the surface.

For example, he examines white leaders who strategically groomed the superiority attitudes of poor whites. He shows how the United Daughters of the Confederacy recognized that “thought is power” and worked to shape the historical narrative – and, thus, the nation’s power structure. As he looks at the context surrounding the Forrest statue in Memphis, O’Neill highlights the tension in Memphis in 1968, when – and where – Martin Luther King Jr. was assassinated.

‘Rumors of War’ and Other Statues Speak Volumes

O’Neill also includes recent relevant history, such as the strengthening of the alt-right and a 2009 report from the Department of Homeland Security, “Rightwing Extremism: Current Economic and Political Climate Fueling Resurgence in Radicalization and Recruitment.” (Republican leaders forced withdrawal of the report.)

In describing the way that many in the South continue to embrace history, O’Neill acknowledges, “It’s all too easy and too obvious for a Yankee to traipse into a Southern cemetery and clutch his Northern pearls … but what were we forgetting? What was reflected in the markers of my own family’s history that we’d rather not look at?”

He admits to his family’s shortcomings and blind spots as early New England settlers and to the North’s support of slavery. “Northern businessmen availed themselves of the profits of the slave system at every level and, in so doing, transformed the country into an industrial behemoth. Bankers, creditors, investors, speculators, and industrialists all had a vested interest in slavery’s perpetuation and expansion.”

Carefully dispersed among illuminating context, O’Neill’s commentary supports deeper understanding. These insights alone commend Down Along with that Devil’s Bones to anyone who wants to better understand issues around Confederate monuments. They inspire those interested in changing the systems that keep our nation from achieving its aspirations of liberty and justice for all.

Epiphanies from a White Woman in the Capital of the Confederacy

For example, O’Neill examines the rationale of the Lost Cause narrative. He explains the phenomenon and, in part, humanizes its proponents. Then, he editorializes. His comments don’t just point fingers – they can steer open-minded readers, too.

Protecting the good name of Confederate soldiers requires forgetting. And so the campaign to extract slavery from the Confederacy becomes a necessary fiction … Through remembering by forgetting … we arrive at the preposterous and yet all-too-common refrain of “heritage not hate” …

This is what ideology does. We don’t adapt our views based on the facts at hand, we assemble facts based on our ideology. We remember what we like. And white Americans are well practiced in this magical thinking, this selective memory. American exceptionalism dictates that we are entitled to a good history as our birthright.

O’Neill’s book can help you base your views on the facts, not on fiction, not on an unexamined ideology, and not on a whitewashed history.