Taking a Peep at Birdie’s 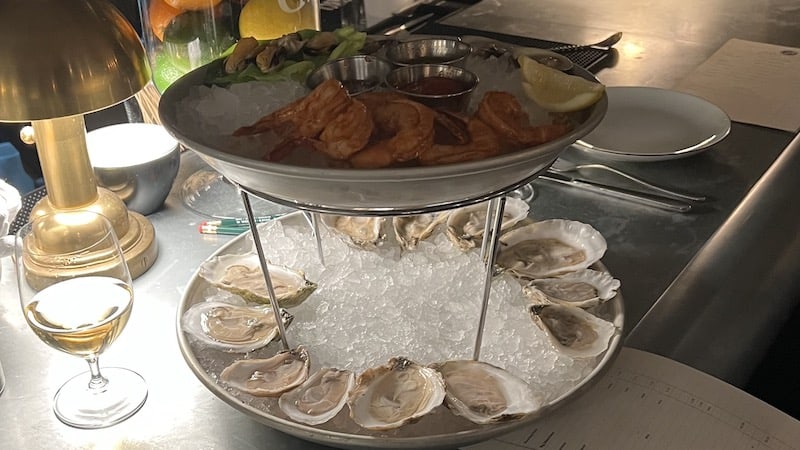 Richmond food and travel writer Steve Cook wings it over to Birdie’s Café and Oyster Bar in Richmond, Virginia, and checks out the Happy Hour at Switch Pop-Up Bar.

When I first heard about a recently opened downtown restaurant, I knew it was the sort of place I had to try. After all, it’s a coffee bar by day and a wine and oyster bar by night. What could be more beautiful than that?

So, I headed toward town with high anticipation, but also with a little fear that it wouldn’t be my kind of place. My kind of place has great food, chef-inspired food, perhaps. But it can’t be too fancy or stuffy or avant-garde. To be honest, I’m not really sure what avant-garde means. By definition, the word sounds cool, but whenever I hear some place described as avant-garde, it tends to be a place I don’t like.

With mixed emotions, I headed to Birdie’s at 305 W. Broad St. It’s small, so it doesn’t take much for it to be crowded, which it was when I visited around 5:30 on a recent Wednesday evening. But there were a couple of seats open at the bar.

As I looked around, I noticed that this definitely appeared to be the sort of establishment that attracted the trendy crowd – the beautiful people, if you will. But everyone was welcoming and friendly, so I figured both the guests and the staff were willing to make an exception, so I sat down.

A couple guys, Matt and Nick, sitting next to me were sharing an impressive-looking seafood tower consisting of oysters, clams, shrimp, and a seafood charcuterie. I learned from looking at the menu that Birdie’s offers an even larger tower, which also includes smoked oysters, lobster, and seafood tartare.

The menu is simple, featuring primarily several selections of oysters both from the Bay as well as New England, plus salads and sandwiches. Ryan, the bartender, told me that next to the oysters, the lobster roll was the most popular item on the menu. He explained the rationale behind the small menu: “Birdie’s is the first open-to-the-public concept from Common House. Folks can have an appetizer here before heading upstairs to eat.”

Common House, which is located next door at 303 W. Broad St., is a members-only social club that offers both co-working space as well as a private restaurant with a full, yet somewhat limited, menu for lunch and dinner.

Since I’m easily intimidated, I’m thinking that if I had realized that Birdie’s was part of a members-only establishment, I may have stayed away. I’m glad I didn’t. Everyone was very cordial and friendly and the service was excellent. 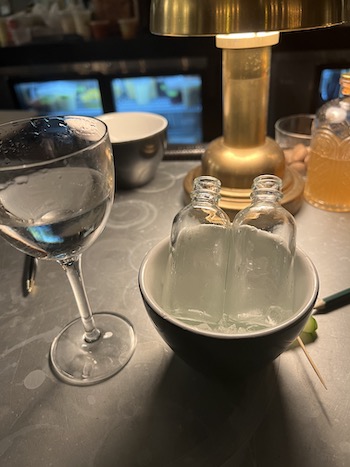 I had intended to have a glass of wine, but once Ryan told me that Birdie’s offered the “coldest martini in town,” I was hooked. I ordered the full martini, served in two small bottles, which are served smothered in ice cubes. The single bottle of the pre-mixed martini, which features navy-strength gin (57% abv), Dolin Dry Vermouth, and Fino Sherry, sells for $7; and the double is, as you may have guessed, $14.I don’t know exactly what constitutes the coldest, but this was plenty cold and very smooth.

As part of Common House, Birdie’s offers seasonal tasting menus and can work with members and non-members in creating a 5-, 7-, or 10-course menu with sommelier-selected pairings. The menu features a variety of red and white wines by the glass or the bottle. Glasses of wine range from around $9 to $15. The restaurant also offers some rather unique cocktails, several with avian-inspired names, including the aforementioned martini, which is dubbed The Sparrow.

Oh yes, one more thing: By day (8 a.m. until 4 p.m. Monday through Friday and 9 a.m. until 4 p.m. on Saturday), Birdie’s is a coffee house, offering grab-and-go crafted coffee and croissants. I didn’t try the coffee, but if it is as well done as everything else I observed at Birdie’s, I’d say you’d have grounds to give it a go.

Post coffee and pastries, Birdie’s is open from 4 p.m. to 11 p.m. on Wednesdays and Thursdays. On Saturdays and Sundays, it’s open until midnight.

HAPPY HOUR OF THE WEEK

I had not visited Switch Pop-Up Bar at 13 W. Broad St. since it first opened in early 2019. It was/is such a cool place, that I had intended to return frequently if only to discover what crazy thing they were doing next. At the time of its opening, we were told that the concept was to have ever-changing themes for two bars, one upstairs and one down. At its inception, the upstairs theme was a very well-done Alice in Wonderland concept, and downstairs, one could return to the 1970s with music, décor, and even drinks that offered the feel of that era. Both bars featured cocktails that tied in with the current theme. The idea was that every one to three months, the themes would change.

But life moves so rapidly, and then there was this whole COVID thing, so this week was my first return visit. I’m glad I went when I did because the bartender, Haile, told me that the current themes would be changing next week.

So, if you’re hankering to see a 21st-century recreation of a 1900 Parisian nightclub, you’d better move quickly. Behind the Curtain, the current theme inspired by the musical “Moulin Rouge,” will soon vanish, only to be replaced with a whole new décor. The room will be repainted and redone. Haile said the new theme is still hush-hush. “They haven’t even told us, yet,” she said.

Downstairs is a different story. What is now a Grinch-inspired nightclub will soon magically transform into the world of Super Mario.

While the cocktail menu changes as the themes change, you can be assured that there’s always something creative going on behind the bar. And, says Haile, the Happy Hour will remain the same.

from 5 to 9 p.m. Wednesday through Saturday