The closest thing to ‘reality travel’ in Western Europe 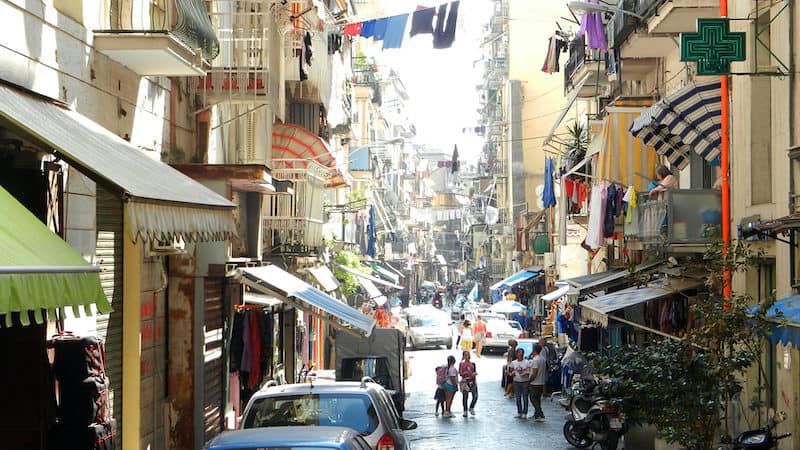 As we’ve had to postpone our travels because of the pandemic, I believe a weekly dose of travel dreaming can be good medicine. Here are a few favorite European memories from Naples in Italy – a reminder of the fun that awaits us at the other end of this crisis.

Strolling through Naples, I remember my first visit to the city as a wide-eyed 18-year-old. My travel buddy and I had stepped off the train into vast Piazza Garibaldi. A man in a white surgeon’s gown approached me and said, “Please, it is very important. We need blood for a dying baby.” Naples was offering a dose of reality we weren’t expecting on our Italian vacation. We immediately made a U-turn, stepped back into the station, and made a beeline for Greece.

While that delayed my first visit by several years, I’ve been back to Naples many times since. And today, even with its new affluence and stress on law and order, the city remains appalling and captivating at the same time. It’s Italy’s third-largest city, as well as its most polluted and crime-ridden. But this tangled urban mess still somehow manages to breathe, laugh, and sing with a joyful Italian accent. Naples offers the closest thing to “reality travel” in Western Europe: churning, fertile, and exuberant.

With more than 2 million people, Naples has almost no open spaces or parks, which makes its ranking as Europe’s most densely populated city plenty evident. Watching the police try to enforce traffic sanity is almost comical. But Naples still surprises me with its impressive knack for living, eating, and raising children with good humor and decency. There’s even a name for this love of life on the street: basso living.

The colorful paradoxes of Naples, Italy: the people

In Naples, I spend more time in the local neighborhoods than the palaces and museums. Since ancient Greek times, the old city center has been split down the middle by a long, straight street called Spaccanapoli (“split Naples”). Just beyond it, the Spanish Quarter climbs into the hills. And behind the Archaeological Museum is perhaps the most colorful district of all, Sanita.

Walking through the Spaccanapoli neighborhood, I venture down narrow streets lined with tall apartment buildings, walk in the shade of wet laundry hung out to dry, and slip into time-warp courtyards. Couples artfully make love on Vespas while surrounded by more fights and smiles per cobblestone than anywhere else in Italy. Black-and-white death announcements add to the clutter on the walls of buildings. Widows sell cigarettes from plastic buckets.

I spy a woman overseeing the action from her balcony on the fifth floor. I buy two carrots as a gift and she lowers her bucket to pick them up. One wave populates six stories of balconies, each filling up with its own waving family. A contagious energy fills the air. I snap a photo and suddenly people in each window and balcony are vying for another. Mothers hold up babies, sisters pose arm in arm, a wild-haired pregnant woman stands on a fruit crate holding her bulging stomach, and an old, wrinkled woman fills her paint-starved window frame with a toothy grin.

Around the corner, there’s an entire street lined with shops selling tiny components of fantastic manger scenes, including figurines caricaturing politicians and local celebrities – should I want to add a Putin or a Berlusconi to my Nativity set.

How retirees can do Europe on the cheap

The abundance of gold and silver shops here makes me think this is where stolen jewelry ends up. But I’ve learned that’s not quite true. According to locals, thieves quickly sell their goods, and the items are melted down immediately. New pieces go on sale as soon as they cool.

Paint a picture with these thoughts: Naples has the most intact ancient Roman street plan anywhere. Imagine life here in the days of Caesar, with street-side shop fronts that close up to become private homes after dark. Today is just one more page in a 2,000-year-old story of city activity: meetings, beatings, and cheatings; kisses, near misses, and little-boy pisses.

I sit on a bench to survey the scene. An older man with a sloppy slice of pizza joins me. Moments later, a stylish couple on a bike rolls by – she sits on the handlebars, giggling as she faces her man, hands around his neck as he cranes to see where they’re going.

I say, “Napoli … is both beautiful and a city of chaos.”

He agrees, but insists, “Bella chaos.”