Can’t get enough of the vintage Richmond-related posters going around? Then, you’re in the right place because the Central Virginia Regional Multiple Listing Service has teamed up with local creative agency Punch to create a series of posters. 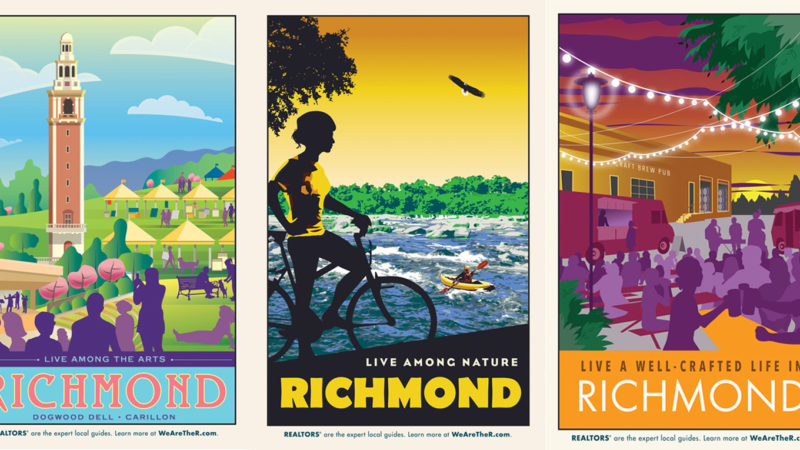 Can’t get enough of the vintage Richmond-related posters going around?

Then, you’re in the right place because the Central Virginia Regional Multiple Listing Service (CVR MLS) has teamed up with local creative agency Punch to create a series of posters in a modernized vintage travel poster style, each highlighting a specific attraction or locality of the metro Richmond region.

Headlines of these posters encourage the public to establish residency in these regions—mimicking those of retro airline posters, which encouraged regional tourism. The tagline on each poster is: “Realtors® are the expert local guides.”

The three posters to be released June 1 include: “Live Among the Foodies,” depicting GrowRVA’s ‘South of the James Farmers Market;’ “Live the Smooth-Sailing Life in Chesterfield,” capturing a scene by the Swift Creek Reservoir; and “Live, Work, and Play in Henrico,” depicting the ‘Innsbrook Afterhours’ concert series.

“I love this concept!” said Karen Grisevich, Founder and Owner of GrowRVA.

“We are a neighborhood market and appreciate the positive comments we often see about South of the James in real estate listings.  How cool is it to be able to walk or bike to the market?” Grisevich added.

By the end of the campaign in November 2016, nine pieces of original artwork will be released to the public and made available to download free at the campaign website.

CVR MLS released a special addition holiday poster last December to unveil the 2016 campaign, capturing some of Richmond’s most cherished holiday traditions. CVR MLS released three new posters March 1, including: “Live a Well-Crafted Life in Richmond,” featuring the region’s craft beer industry; “Live Among Nature,” featuring the James River park system; and “Live Among the Arts,” featuring ‘Arts in the Park’ and ‘Festival of the Arts’ at Byrd Park and Dogwood Dell.

The Crossroads Art Center on Staples Mill Road will feature the artwork released to-date in an exhibit in Gallery One from July 15 through Sept. 3. An open house and artist reception will be held for the exhibit on Friday, July 15, from 6 p.m. to 9 p.m.

“And with Crossroads Art Center being the largest source for local art in RVA, it seemed like a natural partnership to feature the posters as an exhibit.”

Three final posters will be released to the public on Sept.1, including two new posters and a re-release of the holiday poster, to complete the series of nine.

The campaign includes heavy use of social media to share the artwork and information on topics related to the region and home ownership, primarily through Pinterest and Facebook. The official hashtag is #RVAGuides.