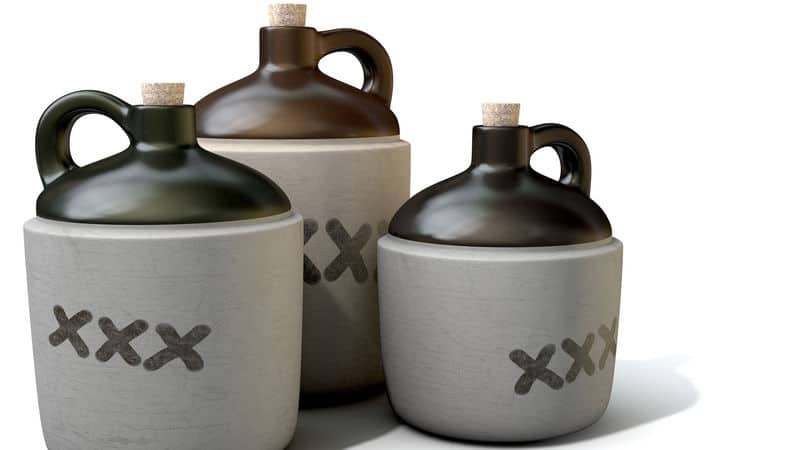 The year 2020 marks 400 years of distilling in Virginia and the fifth year observing September as Virginia Spirits Month. As the Virginia Distillers Association puts it, “It’s 5 o’clock for 30 days”! The trade association and its 30 member distilleries are commemorating these major milestones and giving consumers another reason to enjoy the Commonwealth’s distilled spirits. To mark the month, Boomer explores 400 years of Virginia spirits history, the state of the industry in 2020, and seven distilleries you must put on your shopping list.

Colonial Beverages and the Beginnings of Bourbon and Moonshine

When colonists arrived in Virginia, safe drinking water was hard to come by, especially in the coastal areas where the English first settled. Alternative “treated” beverages such as beer and liquor, however, were totally safe. And a lot more enjoyable! Early ships that came to the site called Jamestown carried necessary staples such as beer and spirits (called “aquavitae”). To ensure an ongoing supply, the colonists soon brought in experienced brewers as well as stills for distillation.

Given the evidence – Thorpe was a distiller back in the Old World and he owned a copper still – this “good drink” is likely to be whiskey. And given that it was made of “Indian corn,” it’s possible that it was the predecessor of bourbon and moonshine.

As further evidence, the colonists who inventoried Thorpe’s possessions 12 years after his death found a copper still and three casks of a drinkable alcoholic beverage. Only distilled liquor could have survived 12 pre-refrigeration years and still be palatable.

As the colonies expanded, so did the colonists’ selection of alcohol. They could satiate themselves with rum, whiskey, fruit brandies, hard cider, and beer.

Rum was a New World creation from Caribbean sugar cane and its byproduct, molasses. It was so popular in the colonies that Britain’s attempts to control the trade of sugar, molasses, and rum through the 1733 Molasses Act contributed to the American Revolution.

. “By 1770, the average white male drank more than three pints of rum per week.”

Home distilling predates commercial distilling in America, adds Bill Dodson, owner of the history-focused 8 Shires Distillery in Williamsburg and a student of Virginia spirits history. In fact, Dodson says, distilling even provided an effective means of preserving beer, which had a more limited shelf life.

Founding father and first U.S. president George Washington used rum and rum punch in campaigning for the House of Burgesses in 1758 and to boost morale among Revolutionary War soldiers. For his inauguration celebration, Washington ordered two barrels of fine aged Barbados rum.

From Pirates to Plows

After the American Revolution, whiskey began to replace rum as America’s distilled beverage of choice. Whiskey could be made using locally grown grains – wheat, barley, corn and rye – rather than imported molasses.

Also in the 1700s, Scottish and Irish immigrants came to Virginia, bringing their distilling know-how and their recipes for “uisce beatha” – “water of life.” Traditional Appalachian whiskey has roots in those recipes for unaged whiskey.

In 1810, reports the Virginia Distillers Association, U.S. census records show more than 3,600 distilleries operating in Virginia; many of these, however, were destroyed during the Civil War.

Besides Thorpe’s early distillation of Indian corn, Virginia has a second claim to the birth of bourbon: Elijah Craig, a name recognizable to bourbon aficionados. Craig was born in Orange County, Virginia, in 1738, and became an entrepreneur in an area of Virginia that later became the state of Kentucky. He is credited by some (including the Elijah Craig distillery) as being the first to age whiskey in charred oak barrels. This is the aging process that transforms whiskey into bourbon.

Booze from a Forefather

Beginning in 1797, George Washington began operating his own distillery; it eventually became the nation’s largest whiskey distillery. The profitable distillery at his Mount Vernon plantation used five copper pot stills for 12 months of the year (versus one or two stills, used one month out of the year, at the average distillery of the time). “In 1799, Washington’s Distillery produced almost 11,000 gallons of whiskey, valued at $7,500 (approximately $120,000 today),” reports the Mount Vernon estate. “The average Virginia distillery produced about 650 gallons of whiskey per year which was valued at about $460.”

Another Virginia liquor point of pride arose during Prohibition.

Prohibition came early to Virginia, which went dry on Nov. 1, 1916 – three-and-a-half years earlier than the national Prohibition. No, that’s not the Commonwealth’s point of pride – moonshine is. The new restrictions inspired many Virginians, especially in Southwest Virginia, and Franklin County became known as the “Moonshine Capital of the World.” The residents of the region resisted federal restrictions on alcohol production and distribution. They made and transported whiskey, skirting the “feds” in new and creative ways.

The trade in moonshine wasn’t merely a way to flout authority. Corn whiskey was an important source of income for many Virginia residents; especially the case for those in rural areas with limited road networks. Given transportation challenges, it was more efficient to move corn if it was first converted to whiskey.

Once corn whiskey became illegal and distillers had to hide their operations, the liquor became known as moonshine. After all, figuratively and often literally, it was produced and transported at night, illuminated only by the moon.

The new need to transport the corn whiskey while eluding the revenuers gave rise to souped-up cars. These cars looked ordinary (i.e., “stock”) so as not to arouse suspicions, but they had hidden advantages. They could carry plenty of bootleg cargo. They were equipped with heavy-duty shocks and springs to keep glass jars from rattling and breaking. Added horsepower for higher speeds and improved suspension for better handling travel helped drivers escape the authorities. Some cars even had tricks that would make James Bond envious; flipping license plates and toggle switches to shut off the taillights, for instance. Once Prohibition ended, these cars and their drivers started another long-running craze: the National Association for Stock Car Auto Racing, known as NASCAR.

The contentious history of alcohol over the centuries, in Virginia and throughout the United States, has made for colorful tales and long-lasting effects, especially surrounding American Prohibition.

Fast forward to the 21st century. Besides Virginia spirits history, citizens of the Commonwealth have much to be proud of. Their distilleries have become part of the wave of independent craft beverages; this includes wine, beer, cider, mead, and liquor. Which brings us to today. Next up, we explore the liquor industry in the Commonwealth!

Boomer editor Annie Tobey flexes her freelance muscles regularly by writing for numerous local and national publications, primarily on craft beer, cocktails, and active travel. Annie’s slogan? A breeze on my face and a draft on my lips!