1,800 tiles crafted by individuals across America 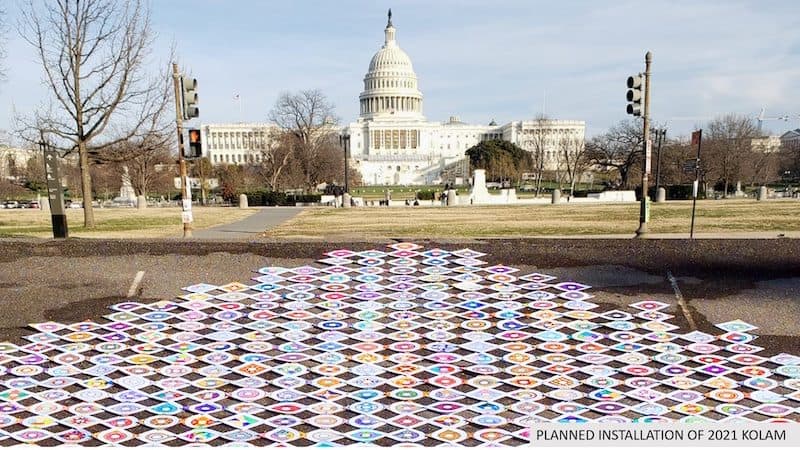 In South India, women draw kolam art outside of their homes daily. This geometric art form also appears at times of celebration, such as weddings and New Year’s. Besides homes, they may grace other places, too, such as temples and roadways. Kolams represent values such as prosperity, health, new beginnings, welcome, peaceful coexistence, and protection from evil. It’s only natural, then, that a kolam art installation in D.C. is scheduled for April 24, 2021.

Although initially scheduled for January presidential inauguration festivities, the exhibition was postponed due to security concerns. “On 24 April,” say installation organizers Sowmya, Shanthi, and Roopal, “we are coming full circle and combining celebrations for the first hundred days, Earth Day, Tamil New Year and more!”

The story behind the Kolam art installation in D.C.

The idea sprang from a project instituted by D.C. Public Schools arts director Mary Lambert and visual arts manager Lindsey Vance, who joined Maryland artist Shanthi Chandrasekar. The project blossomed, eventually including thousands of kolam tiles made by people of many different backgrounds. Artists, students, and others from across the U.S. and beyond worked to create individual tiles to be joined into a single mosaic.

Chandrasekar said the Inauguration Kolam was designed to be accessible and inclusive to signify a sense of unity. “Many believe kolams symbolize positive energy and new beginnings,” said Chandrasekar. “People of all ages from various communities collaborated from their homes to create tiles with eco-friendly materials. What started out as a local project spread way beyond our expectations.” 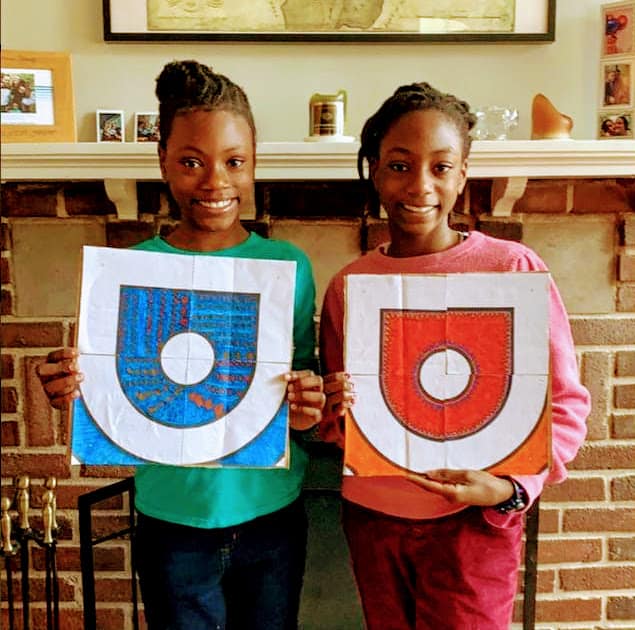 Students from 10 D.C. public schools participated in the project. Lambert said the DC Public Schools arts curriculum focuses on equity and believes cultural representation is an important part of that effort. “This project provided an opportunity for our students to learn about another culture and the math skills needed for creation in the arts,” said Lambert. It also provided “an opportunity to express their identity through visual arts and to see that united with others from around the country.”

“With the rise of diverse America, the energy behind this artwork is a reminder of what binds us together as Americans,” said Shekar Narasimhan, a Virginian whose niece and grandniece contributed tiles for the kolam art installation in D.C. 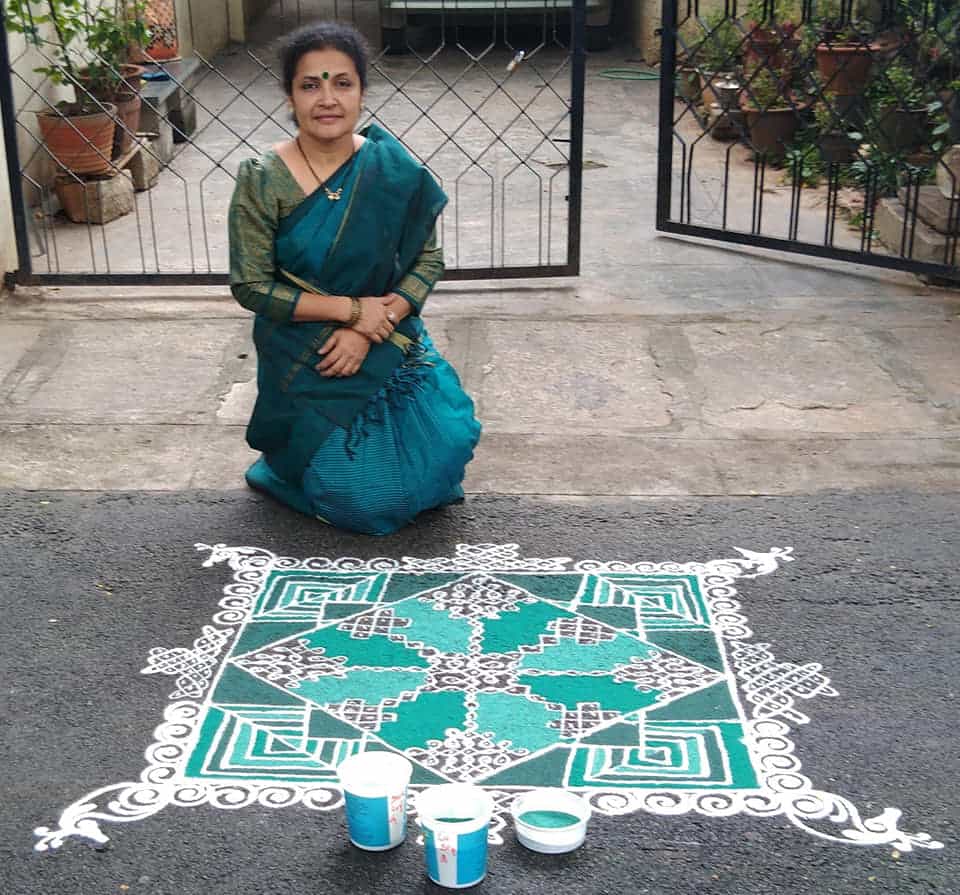 Kolam’s popularity in South India makes the installation especially appropriate since Vice President Kamala Harris has roots there. Harris’ mother, Shyamala Gopalan Harris, came to America to study in a master’s program at the University of California, Berkeley. Her work as a biomedical scientist led to advances in combating breast cancer.

“When she came here at the age of 19,” Vice President Harris said of her mother, in her election victory speech on Nov. 7, 2020, “… she believed so deeply in an America where a moment like this is possible.” The family traces its roots to Painganadu, a hamlet in eastern Tamil Nadu. Harris’ maternal grandfather, P.V. Gopalan, was a high-ranking Indian government official. Kamala Harris made annual trips to India as a child to visit her grandparents.

Artist Shanthi Chandrasekar, who grew up seeing her grandmother creates a new kolam at sunrise every day, said, “There is so much to learn from kolams. The dots represent challenges or obstacles and the line weaving through the dots is like problem-solving your way through life. Even today, when I have a problem, kolams come to my rescue; I would simply spend time following the lines of a kolam and almost always, a solution emerges!”

Truly a metaphor for America today.

The project has two parts.

The Kondattam (“celebration”) Kolam brings together 1,800 handcrafted-cardboard tiles, arranging them in a 2,500 square foot mosaic in front of the U.S. Capitol. The organizers will have a “kolam-cam” capturing the live installation. Follow on Facebook @2021kolam for updates.

The Vanakkam (“welcome”) Kolam has created a digital mosaic of individual kolam selfies, of the many creators and their kolams. This digital kolam shows the scope of the participation and enables viewers to zoom in on individual submissions.

For a snapshot of some of the creator stories and their kolam art, see images below and visit the 2021Kolam website stories page. 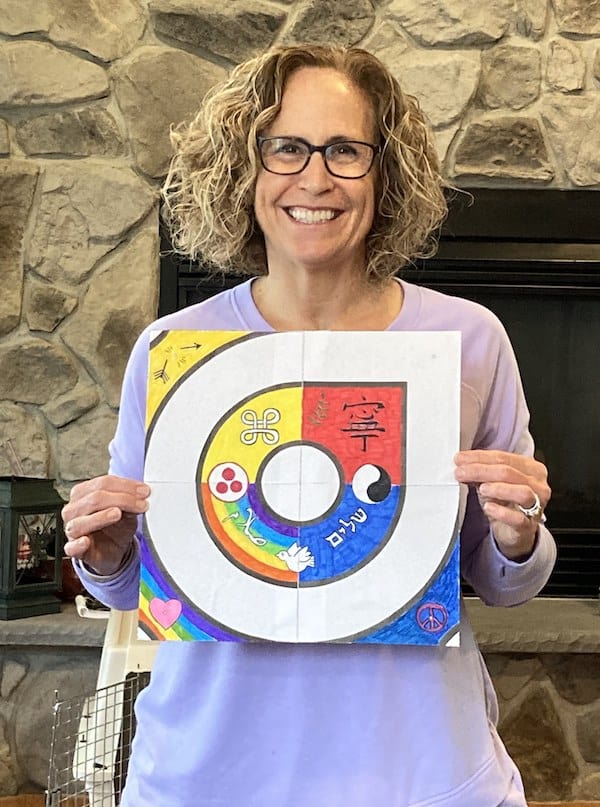 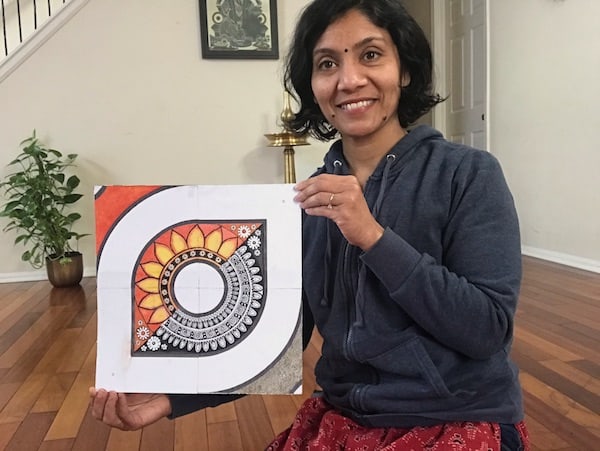 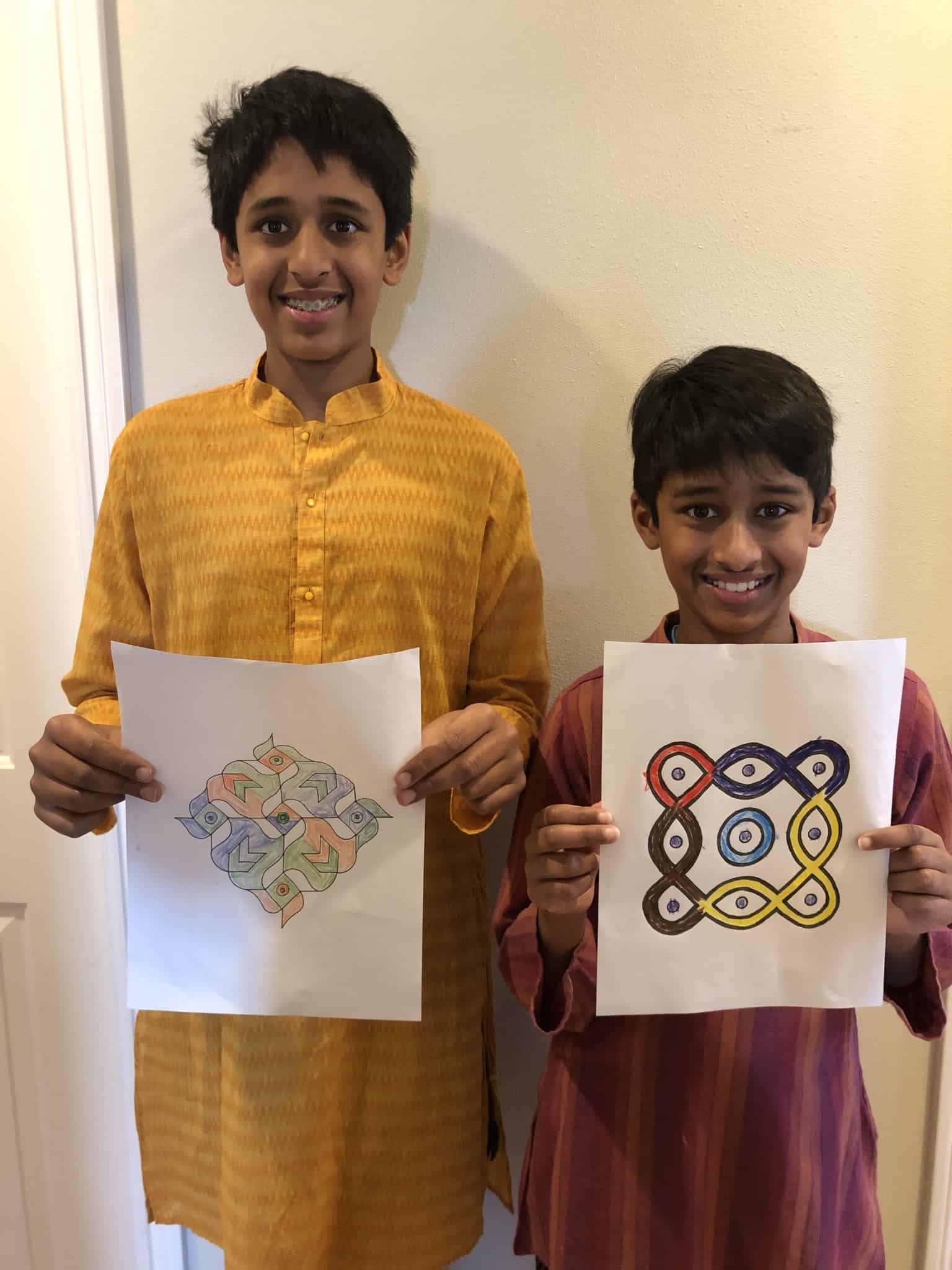 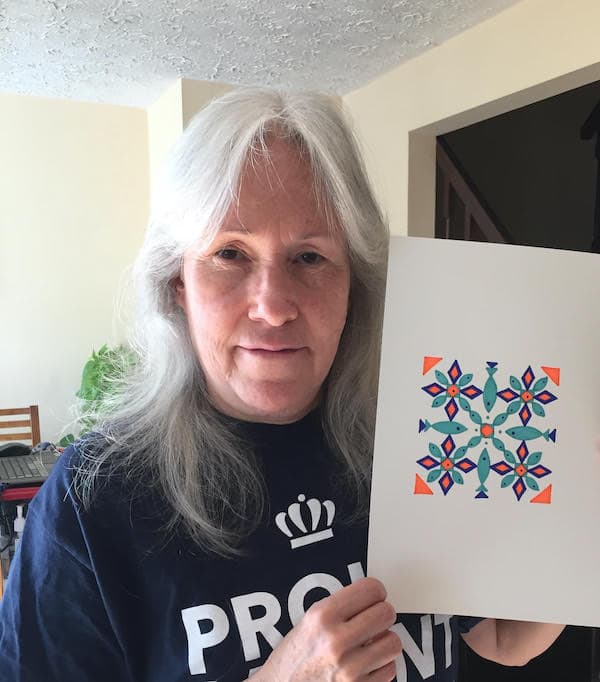 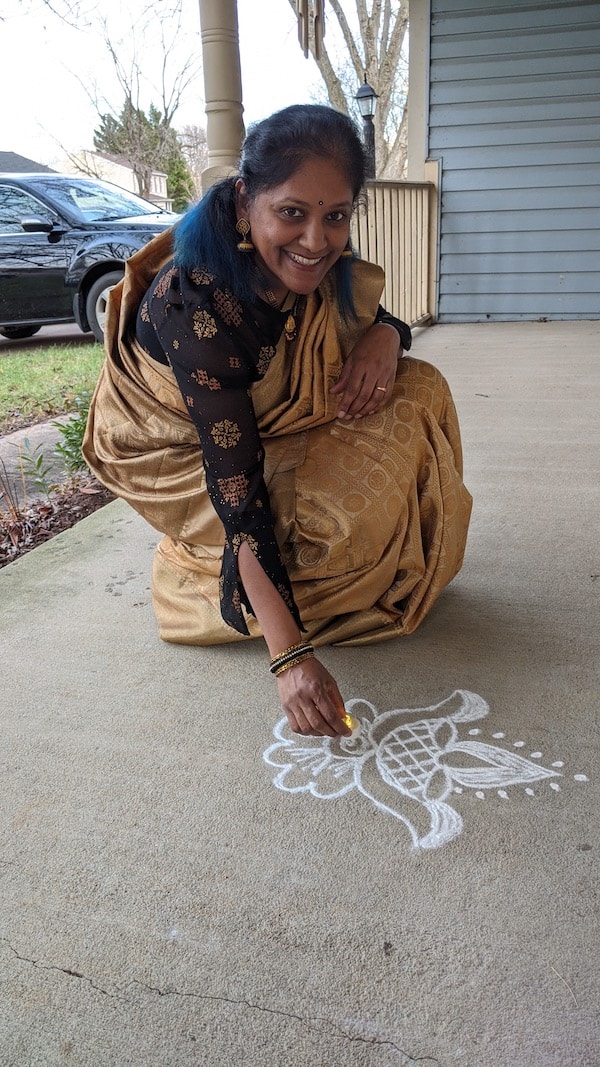 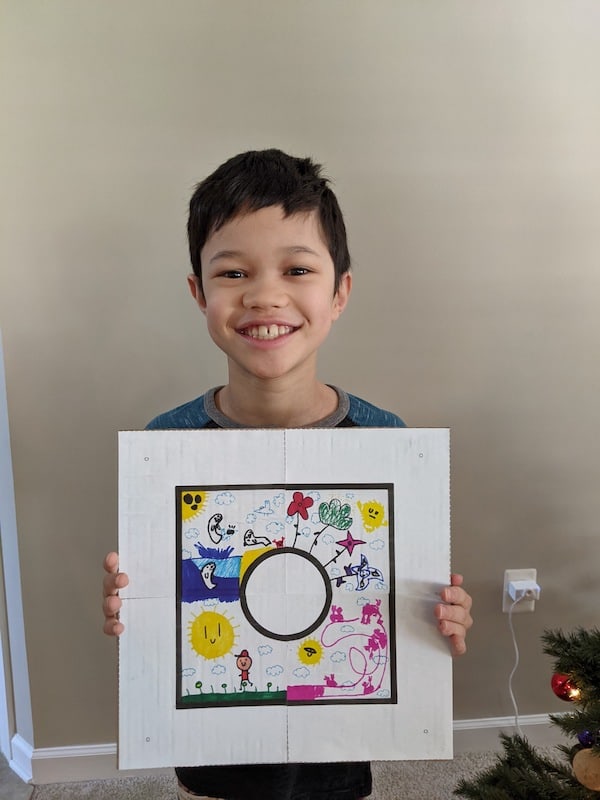 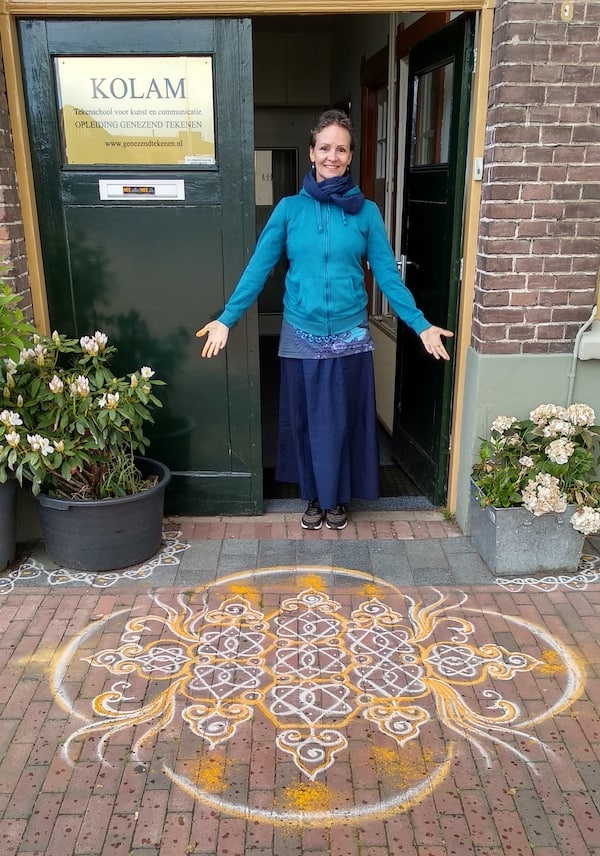 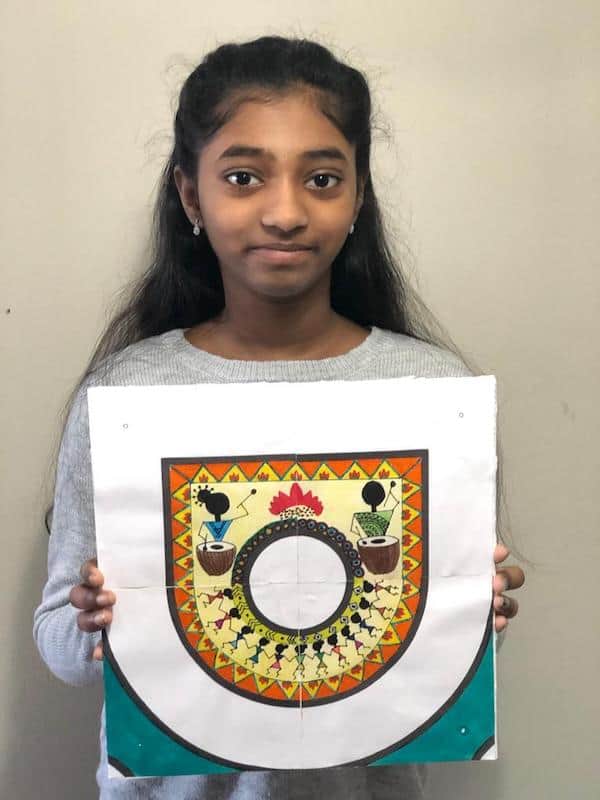 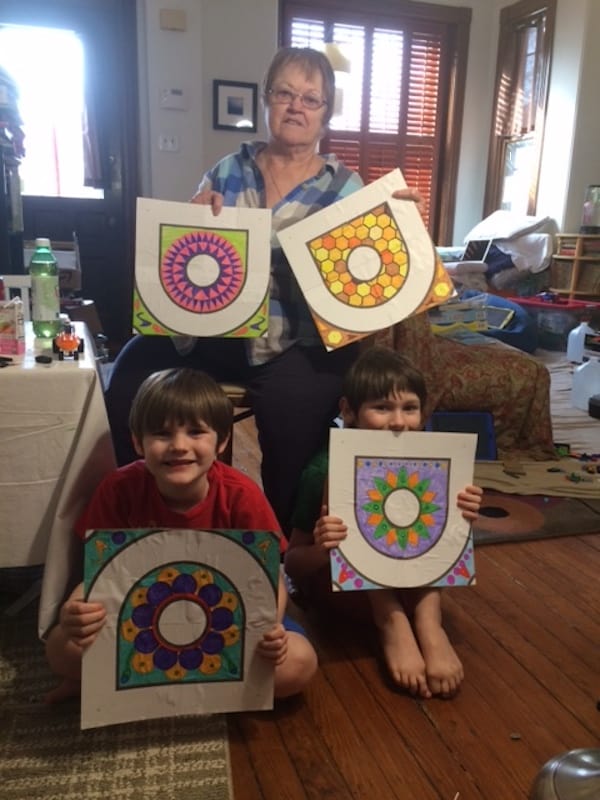 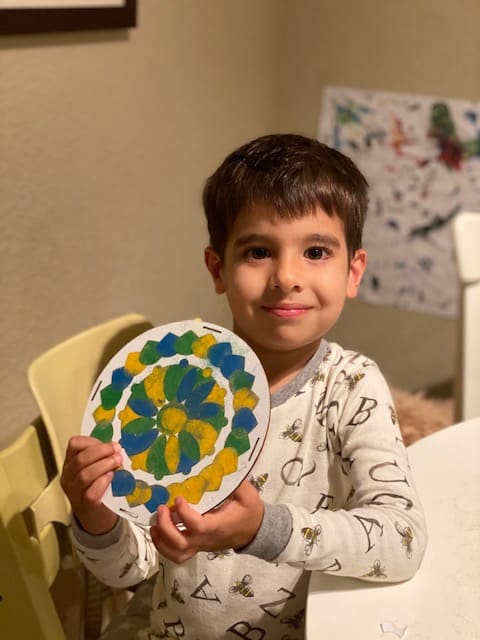 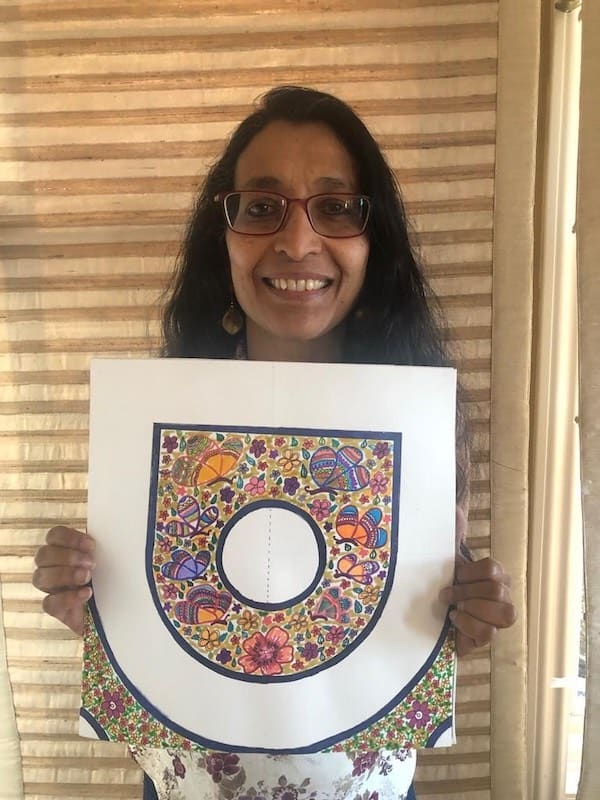 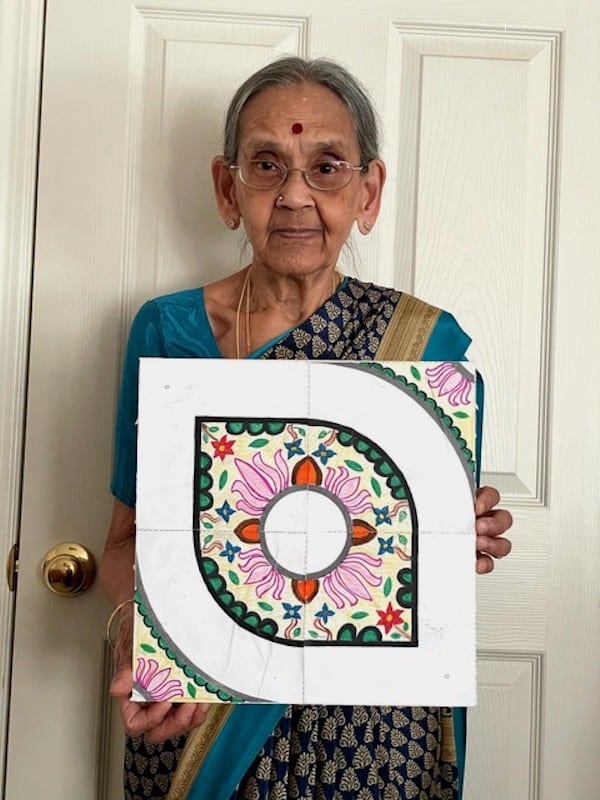 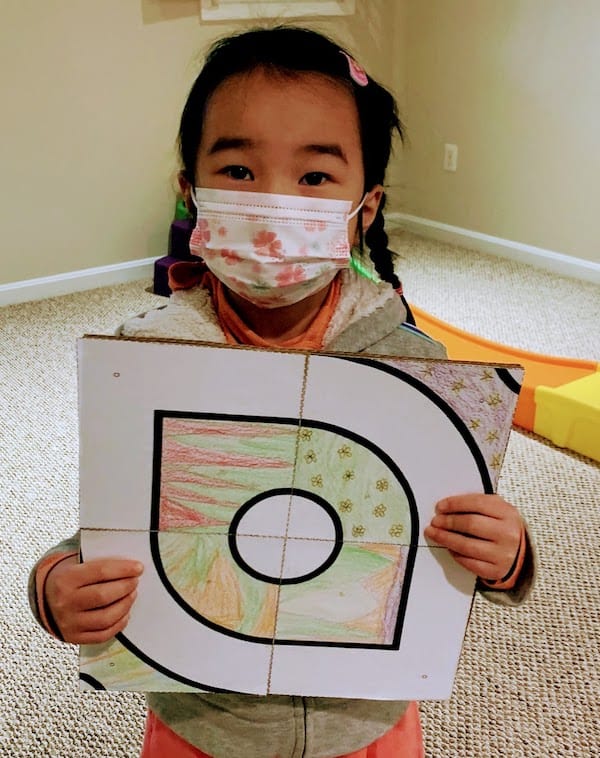 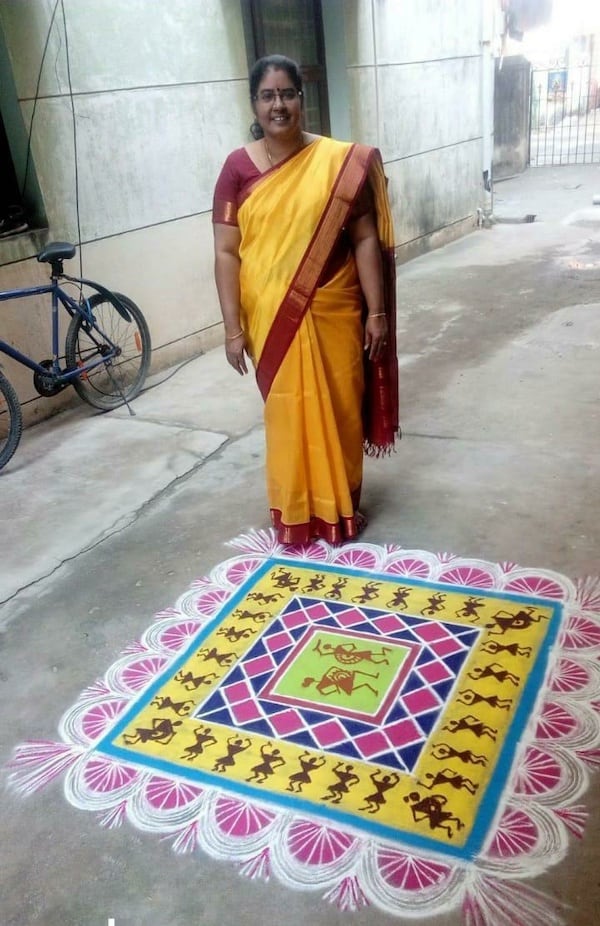 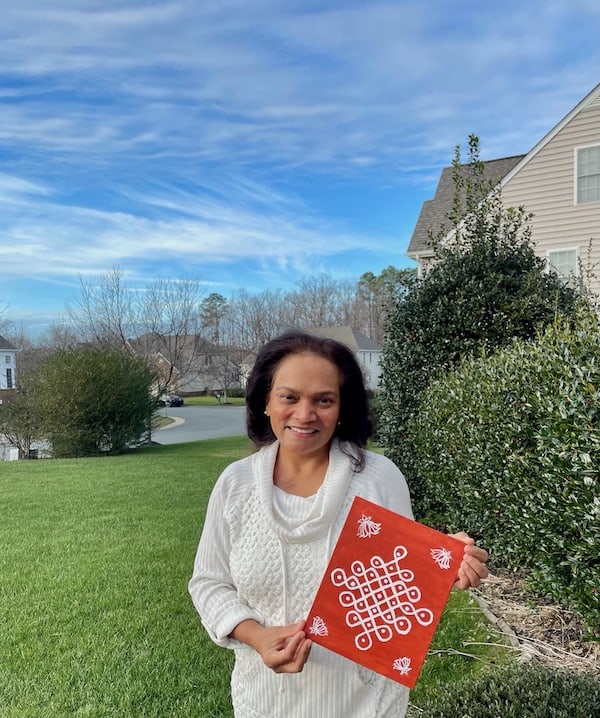 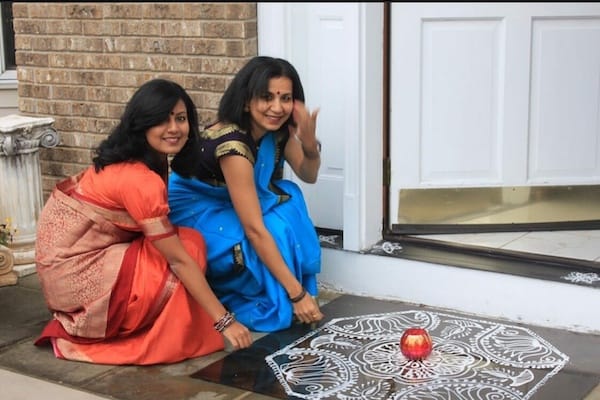 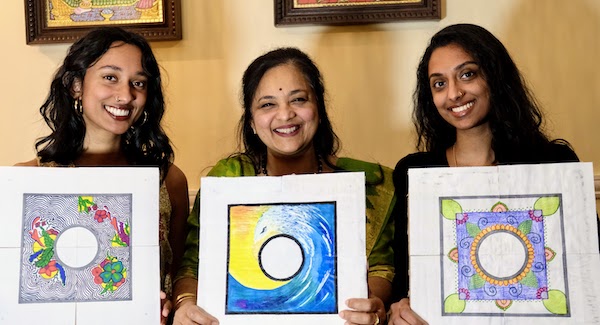 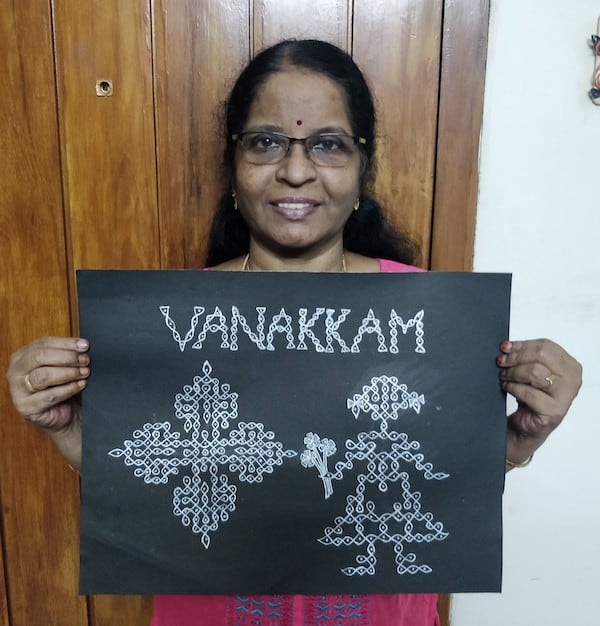