Giving him the "no respect" he deserved 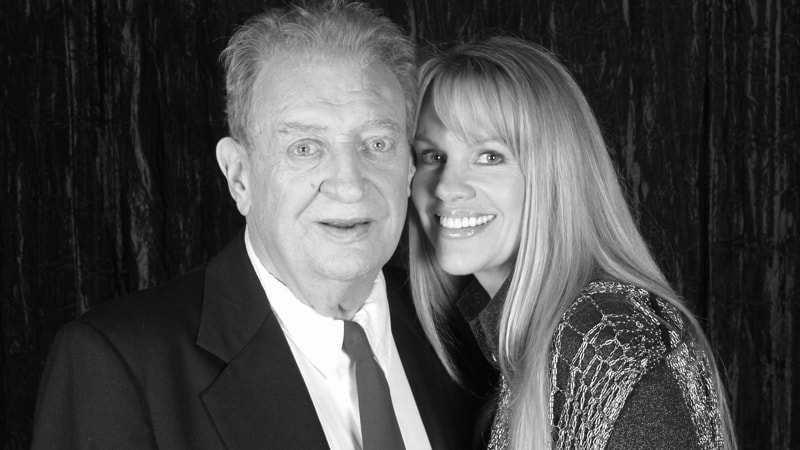 The Christmas season may be over, but last December held special significance for Joan Dangerfield who married comedian Rodney Dangerfield 25 years ago on December 26. The pair had dated for 10 years following a chance meeting in 1983 when Rodney strolled passed Joan’s Santa Monica flower shop.

“Being a die-hard fan, I recognized Rodney immediately,” Joan recalled from her West Hollywood home. “I was 16 when I first saw him on ‘The Tonight Show’ and suddenly there he was, 14 years later, walking towards me, the funniest man in the world. For me, it was love at first sight, the holy grail of encounters. He was fascinating and had those soulful azure-blue eyes, the color of the sky on a clear day. I couldn’t look at him without smiling.”
The bug-eyed, tie-fidgeting, comedian who cracked up audiences for decades with his often self-deprecating ‘no respect’ style of rapid-fire one-liners began dropping by each morning to watch Joan arrange flowers. Despite their clearly different backgrounds – Joan was raised in a Utah Mormon family – the two hit it off immediately.
“I felt like the luckiest person in the world,” she said. “To have your own personal comedian constantly surprising you, I couldn’t wait to wake up each day.”
Joan remembers Dangerfield working hard at his craft, writing his own stand-up material often taking months to perfect a joke. He would dash off to local comedy clubs in the evenings, sometimes two or three a night, to try out a new joke and experiment with its delivery and placement within a routine.
Although Dangerfield experienced an unhappy childhood, Joan says he used humor to tackle depression. “If you can lift everyone’s spirits around you, you can feel a bit better too.”
Toward the end of their two-decade marriage, Dangerfield’s physical health declined requiring multiple aneurysm, brain and heart surgeries, and long periods of recovery with Joan by his side throughout.
“He joked that, at his age, all the phone numbers in his little black book were doctors,” she said. “It was certainly true and brought out my nurturing side. I did everything I could to comfort him.”
Dangerfield died in 2004, aged 82, and Joan has since worked to keep her husband’s memory alive. His website (www.rodney.com) has been revamped and the Rodney Dangerfield Institute for the Study of Comedy is now housed at Los Angeles City College and offers classes including stand-up, improvisational comedy, and joke writing.
“Rodney’s social media presence is building, and it’s fun to see the reaction from his loyal fans as well as new ones,” she says. “I am also very excited that Paradigm Talent Agency is currently fielding offers for a biopic or documentary film about Rodney’s remarkable life. I am sure that will deepen his impression on the world.”