Laurie Jacobson compiles a new Beatles book, with a little help from her friends 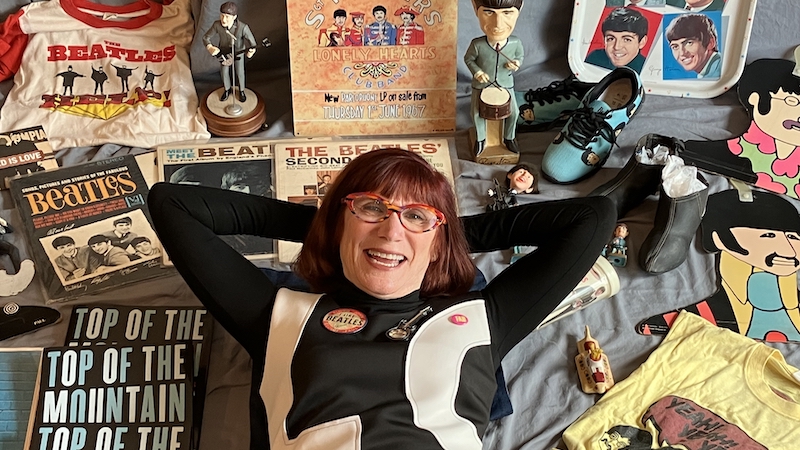 Nostalgia writer Nick Thomas speaks with Laurie Jacobson, author of a new Beatles book, “Top of the Mountain: The Beatles at Shea Stadium 1965.”

Producing a book showcasing her favorite band was a dream come true for life-long Beatles fan Laurie Jacobson. A celebrated author of five previous Hollywood books, her latest effort did require the assistance of others.

In the new Beatles book “Top of the Mountain: The Beatles at Shea Stadium 1965,” released on Aug. 1, 2022, Jacobson meticulously weaves first-person interviews and quotes from dozens of writers, agents, producers, photographers, fans, friends, and celebrities such as Meryl Streep and Whoopi Goldberg who have come together to convey the compelling story behind the historic New York Beatles concert.

Jacobson didn’t merely recount a day in the life of the Fab Four’s milestone 30-minute show that featured a 12-song set before some 56,000 screaming fans from the twist and shout generation. She describes the long and winding road leading up to the Aug. 15 event and, in the end, its influence on music history as the first pop concert performed in a major American sports stadium – shattering attendance records.

“I spent close to seven years gathering information and amazing photos – hundreds never seen before,” explained Jacobson from her home in Northern California.

Laurie Jacobson’s yesterday, the road to her new Beatles book

Laurie was just 10 when the Beatles began consuming her adolescent world.

“Like so many others, I saw them on ‘Ed Sullivan’ and was immediately hooked,” she recalled. “Those smiles, that hair! I ran right out to buy their 45 of ‘I Want to Hold Your Hand’ and went bonkers with posters and magazines – anything Beatles!”

Excerpt from the 2014 book, “The Beatles Are Here! 50 Years After the Band Arrived In America, Writers, Musicians And Other Fans Remember”

Although unable to attend the famous Shea event because she lived in St. Louis, almost exactly one year later her parents provided a ticket to ride the wave of Beatlemania still sweeping the country when the group came to town on their final U.S. tour.

“It was threatening rain,” she remembered. “So, they dispensed with the opening acts and straight away introduced the Beatles. I watched in silent wonder, teary-eyed, knowing this was my moment with them. I wanted to soak in every detail and memorize every move. I honestly don’t remember a thing about the crowd, just them. Nine 3-minute songs and it was over. The rain was falling, and my parents whisked me away.”

Barely a teen, Laurie let it be known to all that this girl had joined the ranks of devoted Beatles collectors while embracing their musical revolution that sparked the so-called ’60s British invasion. Sure, some disapproving parents across the country were declaring it’s all too much – cringing at the group’s mop-top hairstyles, their raucous music inciting its liberating social influence, and the near-hypnotic effect on their adoring teenage fans – but hers were understanding.

“They supported it 100% and often surprised me with Beatles items which I cherished and still have,” said Jacobson, who maintains a collection that includes dolls, models, T-shirts, a yellow submarine, rare albums and books, posters, buttons, ticket stubs, and several decades worth of scrapbook clippings.

Memories of the Beatles at Shea Stadium 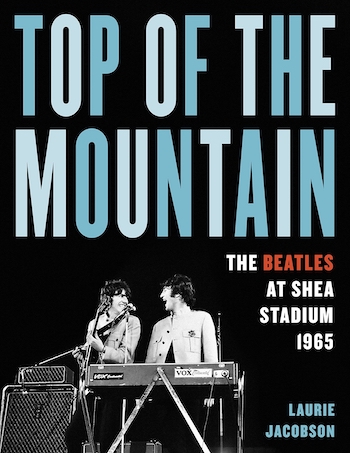 With the Beatles touring days waning in ’66, the previous year’s sellout Shea Stadium concert remained the most memorable, not only for fans but for the band as well.

“Biggest crowd they ever played and biggest paycheck, too,” noted Jacobson. “You can see on their faces when they step onto the field – the moment they became aware of their power.”

For her new Beatles book’s title, the author even paraphrased something John Lennon later remarked in 1971 about the Shea concert: “I saw the top of the mountain on that unforgettable night.”

For those who lived through the ’60s, the Beatles provided musical diversion to help survive the ever-tightening social, cultural, and political chains crushing the country. Today, in a post-Beatles world seemingly also inundated with disturbing national and global issues, baby boomers can still, if only briefly, get back that uplifting spirit their music provoked.

“It was so much more than their music for us – they changed the way we looked, the way we thought, and for many, the paths we chose,” explained Jacobson. “Our memories are full of love and emotion, and we have passed that on to our children and their children. I’d like readers to experience the pure joy at the peak of Beatlemania when optimism ruled and anything was possible.”

FEATURE PHOTO CAPTION: Laurie Jacobson, author of the new Beatles book, “Top of the Mountain: The Beatles at Shea Stadium 1965,” surrounded by some of her Beatles memorabilia. Photo credit Jon Provost

Candy Leonard, author of “Beatleness: How the Beatles and Their Fans Remade the World,” on remembering John Lennon

“Imagine This,” a book from the musician’s half-sister on growing up with John Lennon

Books by and about favorite boomer musicians and influencers

A look back at St. Pepper’s Lonely Hearts Club Band