Imagine Growing Up with John Lennon

The Beatles’ singer’s half sister, Julia Baird, shares her memories 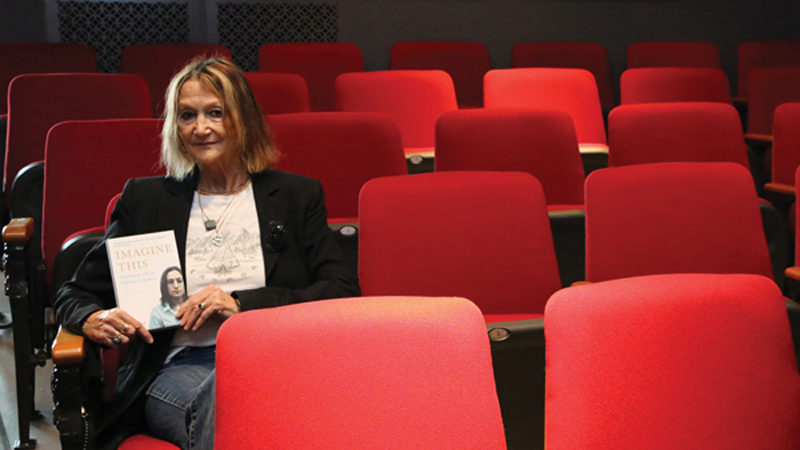 John Lennon’s half sister, Julia Baird, spoke with BOOMER during an appearance at Hopewell’s Beacon Theatre in April 2916 with The Mersey Beatles (TheMerseyBeatles.com), resident Beatles tribute band at Liverpool’s Cavern Club for over a decade. The Beatles played 292 times at The Cavern, a music venue and tourist attraction. Baird is joining The Mersey Beatles on many 2016 tour dates. Have you ever wondered what it would have been like to be a member of John Lennon’s family? In 2007 Julia Baird wrote Imagine This: Growing Up with My Brother John Lennon. Candid about her book and life, Baird grew up idolizing John and believes her book separates “John the Brother from John the World Icon.”

But she admitted, “Only in the last month, somebody wanted to meet me and we met in Liverpool [for] coffee. He said, ‘Your book isn’t about John, it’s a love letter to your mother,’ and he nailed it … he put into words what [my book] is.”

A petite, soft-spoken woman, Baird, 69, is a retired special-needs teacher who worked with troubled adolescents. She lives in Liverpool and is one of The Cavern Club’s directors. Imagine This is her second book; her first, My Brother, John Lennon (1988, co-written with Geoffrey Giuliano), was prompted by a 1985 BBC documentary on Lennon’s life.

“I sobbed all the way through it and [my] children ended up comforting me,” she explained. “Beautiful Cynthia [Lennon’s first wife], they portrayed her as someone with a head scarf on who was ‘after’ John. It didn’t even mention Julian [John and Cynthia’s son]. No one had spoken to us. The next day I rang up the BBC and spoke to the producer, or maybe it was the director, [telling him], ‘You didn’t even mention John’s sisters,’ and he said, ‘John hasn’t got any sisters.’ I said, ‘You’re talking to one!’ ”

Even after the 1988 book, Baird knew there was more to be told: “In 1997 [our maternal aunt] Nanny was dying and she suddenly started to talk. She didn’t have all the jigsaw bits, but she left me enough to give me some truth. That’s why there’s a second book.”

Baird and Lennon share the same mother but had different fathers. After John’s parents separated, his mother entered into a common-law relationship with John Dykins, resulting in half sisters Julia and Jackie. Lennon’s mother was viewed as “living in sin” by Aunt Mimi, and family complaints to social services sent 5-year-old John to live with Mimi. (In her book, Baird says Mimi dubbed her sister’s home “the House of Sin” and her own home as “the House of Correction.”) Despite the living arrangements, John managed to spend so much time with his mother that Baird said she “never knew a life without John.”

“He was just there. My mother and John used to ‘laugh about’ in the kitchen, always joking and laughing. They had a zany sense of humor and understood each other. She was teaching him to play the piano, the banjo and the piano accordion, a great big one. She was only 5’2” and would strap herself into it with these big leather straps.”

Baird also laughingly remembered John’s various pre-Beatles music groups: “Way before The Quarrymen, there was Johnny & The Moondogs, Johnny & The Rainbows … You could see who the leader of those groups were.”

In 1958 Julia Lennon, 44, was struck by a car and killed. John was 17. Baird and Jackie were sent to live with relatives. In 1964 The Beatles debuted in America, and John returned with tales of the “crazy American fan base.” Baird and Jackie visited Lennon, Cynthia and Julian at their Weybridge/Surry home, saw The Beatles and Rolling Stones perform together and attended British Beatles concerts.

Baird writes in Imagine This that John was planning a trip to see his Liverpool family in 1981; he was murdered in December 1980 in New York, where he lived with his second wife, Yoko Ono, and son, Sean. Baird met Sean for the first time in 1991 at Aunt Mimi’s funeral but remained close to Cynthia until her passing in 2015 and stays in touch with Julian.

“Top of the Mountain: The Beatles at Shea Stadium 1965”

Candy Leonard, author of “Beatleness: How the Beatles and Their Fans Remade the World,” onremembering John Lennon

“He was a very good son, extremely attentive and loving,” she says of Julian. “He’s into photography now, which I think is great for him, because it’s something John didn’t do. It can be a hindrance being the son of an icon.”

Baird, who found her niche working with children with emotional and behavioral difficulties, believes John was “tormented” by early family dynamics. Other writers have also pointed to Lennon songs like “Julia” (White Album, 1968), whose lyrics include “Half of what I say is meaningless/but I say it just to please you, Julia,” and “Mother” (John Lennon/Plastic Ono Band, 1970), where John intoned “Mother, you had me/but I never had you,” as pivotal in understanding the man behind the songs.

And though Baird has realized there’s no escape from The Beatles, she emphasized, “But for us, he was just John. I will always remember him in the kitchen with my mother.”

Excerpt from the 2014 book, “The Beatles Are Here! 50 Years After the Band Arrived In America, Writers, Musicians And Other Fans Remember”