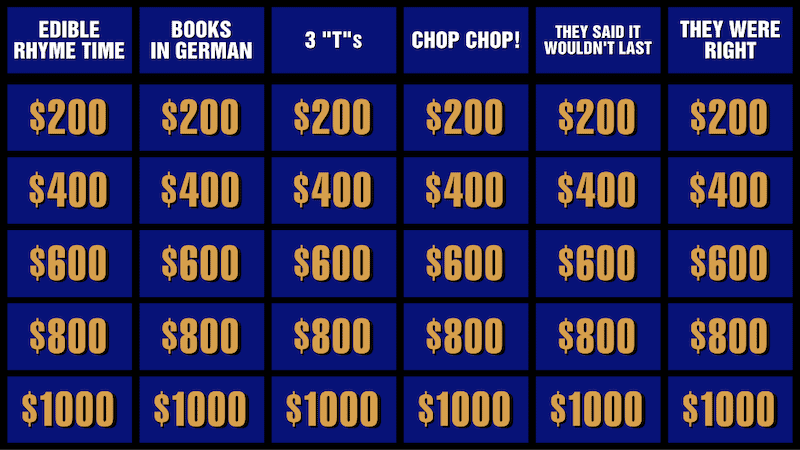 Back in 2018, when he was happily cancer free, the late “Jeopardy!” host Alex Trebek announced he was pondering retirement. Immediately I began polishing my resume.

In an earlier column, I pleaded with executives at Sony Pictures Television, distributors of the popular quiz show, to consider an unknown host for the role. Specifically, me. Someone whose updated LinkedIn profile would include “Unbridled passion for a game that involves more than ‘buying an o.’”

The television world hasn’t hired an unrecognizable face for such a high-profile assignment since 1993, when NBC announced some Harvard kid named Conan O’Brien would take over for David Letterman, after the latter moved to CBS. O’Brien eventually found his stride; true his late-night show (now on TBS) will be ending in June, but 28 years is pretty remarkable for a guy previously known for writing “The Simpsons” dialogue.

Trebek bravely hosted “Jeopardy!” until just 10 days before his death. All-time “Jeopardy!” champion Ken Jennings was tapped as the first replacement, performing admirably amid intense speculation that he would eventually be elevated to permanent host. But the creative minds at Sony have other plans.

For now, anyway, they have taken the easy and overdone-to-death route: Hiring a revolving cast of celebrities because, gosh, the public is hankering to see more of Anderson Cooper. Or Green Bay Packers quarterback Aaron Rodgers. Or “Today” show co-host Savannah Guthrie. Or TV doctor Mehmet Oz. All four have been promised tryouts, according to published reports.

True, celebrities love “Jeopardy!” They also love to brag on social media when the game includes them. A simple Twitter search yielded celebs like Billy Eichner taking a screenshot of the “Jeopardy!” board and gushing, “Oh my God I was a clue on JEOPARDY today!!! WHAT IS… AMERICAN HORROR STORY!!! I’m freaking out!!!”

Whoa, Billy. Dial it back a few exclamation points.

A crystal ball: The risks of Jeopardy celebrity guest hosts

I’m not saying the upcoming hosts would be reading clues about themselves during their stints, but, in the event a columnist/comedian, disgruntled about being passed over for Trebek’s job, was to get a job as a WRITER on the show, then “Jeopardy!” viewers can expect to see the following scenarios playing out in upcoming episodes:

“The answer is: ‘This major cable operation was often referred to as ‘fake news’ by the Trump administration.’”

“That is correct. Well, it’s not really correct. I mean, we’re not fake news. You want fake news? Head over to Fox. That’s where’s you’ll see some…”

“I’m not reading that one.”

“The answer is: ‘Against an over-the-hill Tom Brady, these fans braved icy temperatures to watch their team inexplicably kick a field goal on a crucial fourth down, costing them a trip to Super Bowl 55.’”

“Yeah, that’s right. And it wasn’t even that cold. And, yes, it was a stupid call. I could have hit Davante Adams easily!”

“The answer is: ‘The married name of a TV host if she wedded a famous Star Wars character.’”

“Correct. Can we take a break? I feel an uncontrollable bout of laughter coming on.”

“The answer is: ‘This doctor occasionally spouts debunked medical theories, including that hydroxychloroquine cures COVID-19.’”

“Phrase it as a question please.”

Sony higher-ups, if you don’t want these potentially embarrassing moments to be a part of the show, my offer to host still stands. You know where to find me.

Like laughing at the potential risks of Jeopardy celebrity guest hosts?

Check out other Boomer articles on laughter or the baby boomer humor of Randy Fitzgerald.